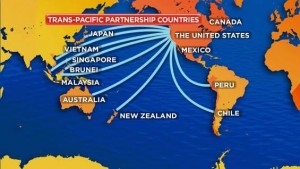 If you liked NAFTA, you’ll love the Trans-Pacific Partnership (TPP). This massive free-trade agreement, which has been labeled a “corporate coup d’état”  and “NAFTA on Steroids,” is sure to pad the bottom line of a few behemoth corporations while disintegrating small businesses, safety regulations, decent wages and even online freedom.

As of now, the Pacific Rim nations involved in the negotiations include the United States, Australia, Brunei, Canada, Chile, Japan, Mexico, New Zealand, Peru, Singapore, Malaysia and Vietnam, and the deal is open-ended to later include China, Russia and others if they choose to sign. But don’t take my word for it, go check the negotiations out for yourself — oh wait, you can’t, because the full terms of the TPP are not available to the public, so we have to go on the bits that have been leaked.

This is an international deal that has the potential to affect half of the world’s population, but only those directly involved in the process are given full disclosure. These few privileged members of the inner circle include government negotiators as well as representatives from over 600 corporations. A shady international corporate summit like this begs the question “What do they have to hide?” Well, it seems that the main goal of the TPP is to allow corporations to operate with impunity and without borders, so that might be why things are so hush-hush. To accomplish their goal of extending corporate power, the proponents of this trade agreement are scheming to fix everything from financial regulations to food safety laws to their liking.

If and/or when the TPP is implemented, corporations based in participatory nations will basically have carte blanche in all other TPP nations. They will be welcomed to the foreign countries with open arms and treated just like native corporations, or even better. If the nation has rules or restrictions like safety standards or labor laws that are determined to “diminish expected future profits,” corporations can sue that country’s government in a private corporate court — settlements of course being furnished with taxpayer dollars. The TPP will make corporations so powerful that they won’t have to answer to a government, and certainly not its citizens.

That is just the beginning of the TPP’s agenda of corporate empowerment. It will outlaw “preferential procurement” in government purchases. This means that all TPP nations, including the United States, will not be allowed to limit public purchases to native companies. The idea behind public purchases of native products is of course that public funds will be injected back into the economy and further benefit the nation as a whole. But with the TPP, all governments involved will be required to take bids from the corporations of other TPP nations. This will have the same effect as outsourcing labor and buying cheaply made foreign retail goods: the money flows out of the national economy and into the pockets of the lowest bidder.

When some nations are able to offer lower prices because they implement the near-equivalent of slave labor and substandard safety regulations, the rest of the world is forced to compete. A trade agreement cementing unethical production practices as the norm will further the tailspin of already flailing economies. All countries involved will be forced to purchase and produce elsewhere or implement those same practices at home. Meanwhile, the few who profit from international trade get richer. This practice is furthering the decline of a decent life for lower-class workers and increasing dependence on products made by these marginalized people.

The TPP is also posing a threat to the physical health of billions. A portion of the agreement spearheads a plan to keep drug prices up and strengthen pharmaceutical monopolies. This includes an extension on drug patents (which will keep companies from producing cheaper generic drugs) and an extension of the amount of time before pharmaceutical research is required to be made publicly available. This is a blatant conflict between the betterment of society and a few corporations making more money.

It also seems that the TPP will allow for lax food safety standards. Food imports will have to meet the TPP standards instead of standards imposed by the United States. Many TPP nations have lesser food safety standards, and the way negotiators have circumvented and destroyed regulations so far, it is almost certain that the United States will be forced to accept imports of a lower standard, as opposed to other countries improving theirs.

But despite all that, the part of this agreement that has received the most negative attention is the section regarding Internet copyrights. The TPP will further the ability of corporations to shut down sites in violation of copyright laws. Like SOPA, it starts with the monetary interests of a few corporations and ends with less online freedom for everyone. Most outrageous of all, leaked texts show that the negotiators wish to include a “three-strike policy” in which violators will be blocked from the Internet. That’s right — the TPP could have you kicked off of the Internet.

So to say that the Trans-Pacific Partnership is an “international” trade agreement might be a bit misleading. It is really an “inter-corporation” trade agreement; the corporations just happen to sit on different parts of the globe. They hope to, for all intents and purposes, get rid of those pesky borders that stand in their way.

Let’s recap: the TPP will allow foreign corporations to sue governments, make drugs more expensive, make food less safe, and kick you off the Internet, and that’s just part of it. Finally, corporations will be explicitly declared more powerful than national governments. And in the fashion of a true hostile takeover, all this could be put into law before most people even know what hit them.