The study of the provocative demise of Miley Cyrus has essentially replaced baseball as the American pastime (the fact that spell-checker didn’t correct her name just now is definitely saying something). While she certainly continues to surpass herself in outlandish displays of brash sexuality, much has been made of both the roots and the intentions willed by her off-color behavior.

Commentary on Miley Cyrus’s twerking, scanty outfits, music videos and tongue has been directed almost exclusively towards the impressionable millennial herself. Sinead O’Connor, a beacon of counterculture and apparent inspiration to the younger singer, both harshly and soothingly warned of the dangers of immersion within the exploitative music industry, puppeteered by the chauvinistic big bad wolf.

Yet the pedantic tone of most advice, however nurturing, is lacking. Last week, Gloria Steinem spoke out that Miley Cyrus is working within “the game as it exists,” raising the larger question of who exactly is setting these rules. There’s the record label, there’s the childhood, but isn’t the art direction crucial? Lately, Miley’s artistic image has been primarily curated by the famed Terry Richardson.

Richardson directed Miley Cyrus’s “Wrecking Ball” music video, and additionally held two private photo shoots with her that have largely been described as pornographic. As a fashion photographer and sometimes artist, Richardson’s slew of high-profile clients is formidable. His website diary over the last four days includes Ralph Lauren, Paris and Nicky Hilton, and Madonna in and around Paris and his studio.

His work has been both revered and accused for graphic yet sultry exploitation of beautiful women, though much of the flack has been published as hearsay. Both Jezebel and the NY Post have each featured tell-all accounts of what it’s like to pose for Richardson in his studio. Models allege that Richardson pushes boundaries not only in his photography, but also behind the scenes. As models strip, he invites them to touch not only themselves, but Richardson himself. Model-turned-writer Jamie Peck says that his band of assistants validate and encourage this behavior.

Both the accusations and the defense are valid — in fact, they overlap. Maybe Richardson is pushing these models, but he is also preying on the most seemingly free-spirited, and thusly, troubled. It is no coincidence that Miley Cyrus has developed her troubled ways in cohesion with her relationship to Richardson. It is reminiscent of his stint with Lindsay Lohan, at the bottom of her downward spiral. Richardson photographed Lindsay with a gun to her head in summer 2012, though he later removed the images from his website abruptly. The questions raised in Richardson’s work recur throughout photojournalism. He didn’t hold the gun to Lindsay’s head. He didn’t force Miley to lick a wrecking ball. And yet, where there is Richardson, there are troubled young girls, documented in full force.

The important thing to remember about Richardson’s artwork is that the dangerously graphic studies are not unique to celebrities and twenty-something troublemakers. Subjects ranging from a pile of hamburgers to his mother take on a harsher, grittier element. Richardson’s eye catches the darkness of all things; it’s what makes his work so intriguing. He is looking straight into the heart of Miley’s wild streak, and it’s why the viewer can see the darkness now, too. 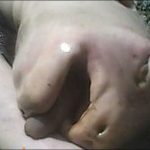