So don’t mess with Texas.  And don’t mess with this Texas Grandma.  She ain’t having it at all.  So that’s what robbers wielding machetes wearing clown masks found out.  Two asshat clowns tried to rob grandma Aretha Cardinal and her husband, Joseph Nelson.  so the couple were sitting in their car when the two men approached them.  They were shocked to see the men carrying machetes and wearing the clown masks.  But the robbery did not go well.  When an older couple beats you off with a kid’s scooter and bare hands, that’s a spectacular fail.

So Texas City police responded and found a scene no one could have expected las week.  The attempted robbery began when the two clowns approached them in their car.  One settled the blade of his machete on Joseph’s neck and told him they were getting robbed.  But things for the robber clowns quickly went awry.  Police said that Joseph took the machete away from his clown and Aretha “struck the other suspect with a child’s scooter which was in the driveway.”  Aretha explained, “It was really scary, but it was like, it was either us or them, you know, and not us.  You not gonna steal no money. We ain’t got no money.”

Joseph recounted, “I’m sitting here talking to my wife and the next thing I know, when I look up, I see somebody running towards me with this white clown mask on and a machete.  He reached his hand through the window, put it on my throat like this and I’m like ‘dude, you serious, you trying to rob me with a machete?'”  So that’s how the two bad clown robbers Luis Jimenz and Joe Lugo got themselves arrested.  They then tried to get away from their erstwhile victims.  But the married couple followed them to their car by smashing one of the windows with their granddaughter’s scooter.  At one point Joseph was even chasing the clowns with their own machete.

So police arrived and arrested (saved) the two clowns.  But they are now in Galveston County jail with a $100,000 bond apiece.  Aretha said, “I’m safe now knowing that they can’t try to hurt nobody else, you know.”  But then she explained the obvious.  “They might go to somebody else that don’t react like us.” 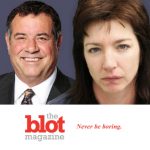 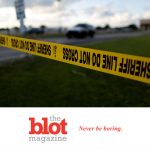