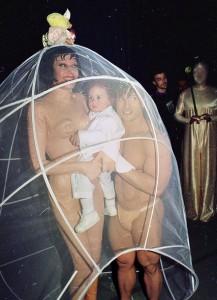 The queen of the mixed crowds, Susanne Bartsch is one of the few promoters left who can bring together a banker, a transsexual, and a woman dressed like an artichoke and leave them all happy and wanting more. The longtime party empress of New York, Swiss-born Bartsch has always known the value of tying various strands of NYC’s social strata together to create a bejeweled assortment of fast and furious folk who somehow make sense when forced into the same bar.

One of her finer achievements has been the Tuesday night On Top party at the Standard Hotel, where a trio of separate yet aesthetically connected areas combine for a three-ring circus of ritualized flaunting and socializing. Le Bain is the smoky, atmospheric room where people rub against each other — sometimes to the beat — the brave ones diving into the jacuzzi for some chlorinated fun that cleanses the pores and purifies the soul. Past the swinging doors is the Boom Boom Room, the Vegasy swirl of gilt and glitz, which the Bartsch event fills with a modern day version of the Rat Pack crossed with the Breakfast Club with a distinct hint of The Damned. And climb the stairs to the very last level and you’ll find the rooftop, an al fresco paradise that fills up with tourists (who possibly read the wrong guidebook), wannabe club kids, ex club kids, and Bartsch’s sequined creatures, who romp around with nothing but an iPhone and a dream.

I’m one of those hosts, holding court at my corner banquette and doling out drink tickets to the chosen few in a way that seems to make me extremely popular. Funny, but the people who usually avoid me like the plague are suddenly desperate to sit by me for a cocktail or three, and I actually love the attention.

Besides, as a host, I’m privy to all sorts of behavior—like the guy who cornered me to demand some profound talk, though after a few minutes, he was yanking out his uncircumcised privates for full display! (Profound enough for me.) Another wacky night, I’d been advised by Bartsch to wear a bra because the evening was a benefit for Third World women who need breast support. That night, I frantically ran around looking to buy a bra, but K Mart was closed, Walgreens only had panties, and the Pleasure Chest only sells candy ones which I feared I’d make a meal of before I got there. But miraculously, I found an erotic shop on Christopher Street which sold a shimmery, red stripper’s thingie that could sort of pass for a bra, in nightclub lighting anyway. I looked great On TOP, as it were, and everyone oohed and ahhed over my sumptuous new bosoms—all for charity, of course. Alas, I couldn’t bear to donate the bra at the evening’s end, sensing that Nigerian women probably don’t need to look like hookers any time soon. So I still have it!

What a fun party! And no, it’s not lost on me that we used to obsessively moan about the Meatpacking District having destroyed downtown nightlife, but now it’s simply subsumed it and served it back to us, so we’re there, with bells on. I also love the bizarre appeal of sitting there and taking in the gorgeous view before realizing, “Wait a minute. That’s New Jersey.”

The photo evidence of the looney mix of contradictions and social healing that happens every Tuesday. See you there next time. I’ve got drink tickies!

Michael Musto is a contributing writer for The Blot, he also writes a column for Gawker and Out.com. You can follow him on twitter. 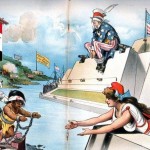 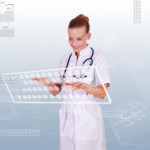