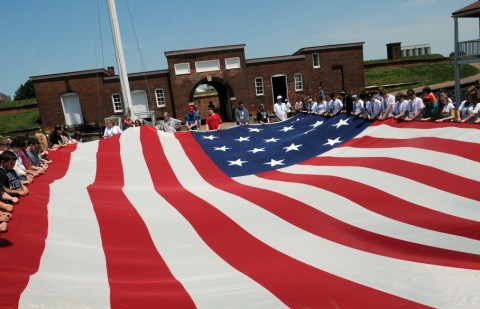 If you follow the news at all, it’s pretty easy to get the impression that America is not particularly well-liked these days. After all, the NSA spies on everybody. The Pentagon has its drones killing terrorists along with innocent bystanders in every corner of the globe. And when we say “football,” we don’t mean soccer. If this were high school, you might think that America had to sit and eat lunch all by itself, but you’d be wrong. The U.S. is still at the popular kids’ table.

Yes, apparently, some people in the Middle East hold a grudge. Geez, you invade a country or two and run an inept occupation for a decade and some people can’t let it go. Being friends with Israel doesn’t help either.

Of course, America isn’t very popular in Russia, either. Pew stated, “The biggest decline in ratings for the U.S. is in Russia, where 71% now hold an unfavorable opinion. About half (51%) the Russian public expressed a positive opinion of Uncle Sam in 2013. In 2014, only 23% hold that view, a drop of 28 percentage points. Russians’ sentiments have been up and down in the last few years (57% positive as recently as 2010).” Ask the average American in the street, and I don’t think 23 percent would have a positive view of Russia. It’s a relationship that needs some counseling.

What did surprise me is that the Greeks don’t seem very happy with America. “More than six-in-ten Greeks express a negative view (63%, vs. 34% favorable). Greeks have been quite negative the past three years at a time of growing Greek frustration over their economic situation.” Sorry, Greece, but I think you need to be pissed at the Germans and French who want all those loans repaid. Meanwhile, we’re busy trying to export your invention (democracy).

What was truly a sign of hope was that there is a generation gap that favors the United States. The kids like us more (Disneyland, hip-hop and the Internet, I guess). “In 24 of 43 nations, there is a generation gap in sentiment toward America with those ages 18 to 29 far more supportive of Uncle Sam than people 50 years of age and older. This age disparity is particularly evident in parts of Asia, where young Vietnamese (89%) look more favorably on the U.S. than do older Vietnamese (64%), a 25 percentage point difference that is possibly a legacy of the Vietnam War, which the older generation would have experienced personally.” I repeat, you invade a country …

Why does that matter? People age, and the older folks who don’t like us will be removed from the sample by the Grim Reaper. Meanwhile, the kids will grow up and take on positions of power. It’s better long term to be popular with 18 years olds than with 65 year olds.

Of course, it helps Brand America if the guy in charge is popular. Kennedy’s America and Nixon’s America were more or less the same country — but people liked JFK, while Nixon was, well, Nixon.

In 2014, Obama is still popular, although some of the image has tarnished since the heady days of 2008-09. “Obama remains largely popular in much of the world, except the Middle East. Half or more of the public in 28 of 44 countries surveyed has confidence in him to do the right thing in world affairs. And his median positive rating is 56%.” He’s actually more popular in Paris, France, than Paris, Texas. The Russians give him a 15 percent approval rating (surprise, surprise, surprise).

In Asia, he remains popular: “Half or more of the publics in nine of 11 Asian nations surveyed have confidence in Obama to do the right thing in world affairs. Such pro-Obama sentiment is particularly strong in the Philippines (89%) and South Korea (84%). About half the Chinese (51%) now approve of his conduct internationally, up 20 points in the past year.” Yes, he is rallying in China, but just 7 percent of the folks in Pakistan like him (and since they were hiding Bin Laden, I don’t much care).

As a son of an African man, it isn’t surprising that he’s got more than a few fans there. Among Africans interviewed, “half or more of the public in all seven nations surveyed give Obama a positive rating. He is particularly appreciated in Kenya (78%) and Tanzania (74%).”

In Latin America, he’s struggling. “In just four of the nine countries in the survey do half or more approve of his conduct of foreign affairs. And his highest rating is a relatively modest 58% in El Salvador.”

Of course, the Middle Easterners don’t think much of him. “Only 13% of Palestinians, 17% of Jordanians and 19% of Egyptians have confidence in his leadership. At the same time, 71% of Israelis give Obama a thumbs up. And that approval has risen 10 points since 2013.”

So cheer up, America. We have more friends than we think. And for those that don’t care much more us, perhaps it’s not us but them. 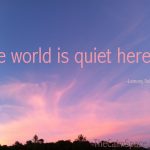 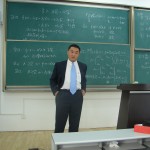