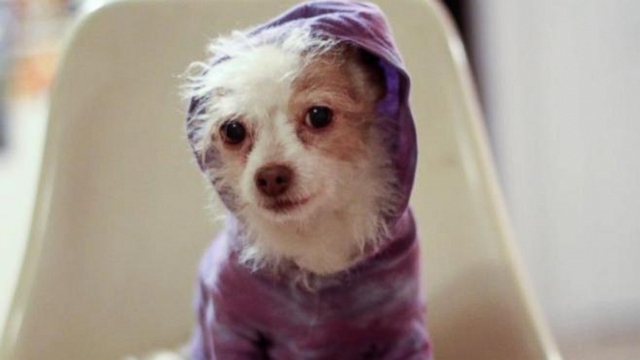 One woman launched a movement to save senior dogs. Her name is Erin O’Sullivan, she’s 29 and lives on the Upper East Side of Manhattan. Five weeks ago, Erin created a Facebook page called “Susie’s Senior Dogs,” with the tagline: “Matching humans and senior dogs one bond at a time.” Word spread fast and now the page has 139,000 likes and is responsible for 25 senior dog adoptions. I wanted to find out what had inspired this great effort, so I clicked “Like” on the page and sent a private message asking for an interview. Erin graciously agreed to talk about her instant-soup campaign success.

Dorri Olds: What gave you the idea for Susie’s Senior Dogs?

Erin O’Sullivan: The first part of my story is about my boyfriend, Brandon Stanton. He runs a project called “Humans of New York.” He takes photos of random New Yorkers. Brandon lives in Bed Stuy, Brooklyn, and three years ago he spotted Susie the dog and her previous owner. He took a photo of Susie, who was 11 then, and posted it to his blog with the caption, “This is the best dog.” Soon afterwards the owner contacted Brandon and asked if he could adopt Susie because his new wife said they couldn’t keep the dog.

Brandon was hesitant at first. Friends said he’d be crazy to take the dog; a senior dog would die and he’d be better off getting a puppy. Who doesn’t love a puppy, right? But Brandon felt bad for Susie. He didn’t want her to go to a shelter, so he took her in.

Susie is technically Brandon’s dog because he adopted her, and if Brandon and I were standing next to each other Susie would jump inside of his lap, but I love Susie so much, too. She really is the best dog in the world. Just for fun I started a page called, “Susie the Dog.” It started getting Likes and I wondered how to take that already engaged audience who loved Susie and make it more than random, meaningless posts. I didn’t really plan anything out, but I had this vague idea and made the new Facebook page, “Susie’s Senior Dogs.” Within 48 hours the new direction took hold.

How do you think you got so many followers so fast?

It’s really thanks to Brandon. He had been building his own big audience by taking photos of people he interacted with in New York City. His audience got so big he even has a book now. His Facebook page is up to 3.5 million Likes, so I asked him if it would be OK to post a link to Susie’s Facebook page. I told him I’ll do all the work and he’d get lots of love. So he said OK. When I had posted photos to Susie’s page, I got 400 Likes, but when Brandon shared it on his page, Susie’s Senior Dogs got 100,000 Likes in one night!

What breed is Susie?

We’re not sure what breed she is. Her ears make her look like she’s definitely part Chihuahua and the poof frizz of hair on top of her head makes her seem like she’s part Chinese Crested.

Did you know things were going to catch on this fast?

We were on ABC World News and we’ve been filmed by Animal Haven. It’s been a whirlwind. I just hope we keep spreading the word to encourage people to adopt a senior dog. You know, you can plan and plan in life, but sometimes an idea just comes to you and it works. This was like that.