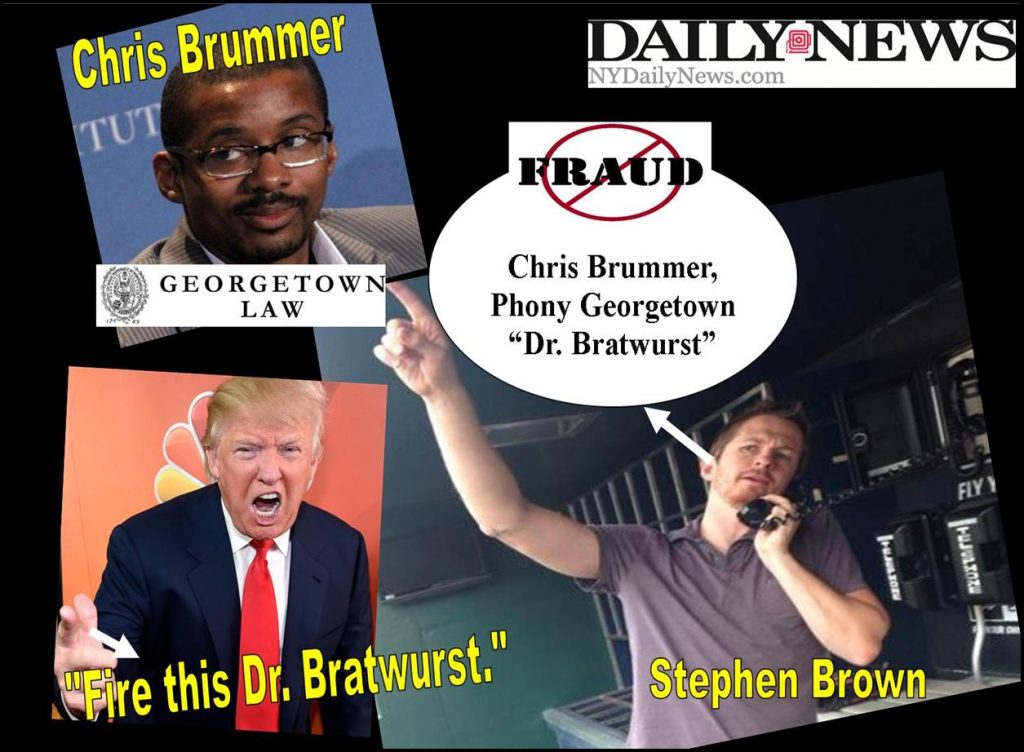 Stephen Rex Brown has a penchant for sex, whores, cocaine and exposing regulatory abusers and fraudsters fleecing the government. Chris Brummer stepped on Stephen Brown’s “landmine” in February 2017, about the same time when president Trump was to go public with the anticipated news that the White House wouldn’t tolerate Brummer’s fake bio and his rock bottom ethics unfit for a CFTC position. In March 2017, Stephen Rex Brown’s prediction came true: President Trump ordered the immediate removal of the highly unqualified, notorious Georgetown Law Center imbecile professor CHRIS BRUMMER as a CFTC nominee, an Obama handover. The humiliating event for Brummer was widely reported in the media as a sign of the Trump administration’s ongoing war against government waste, rooting out incompetent, bookworm nominees that have no substance behind their glossy bullshit resumes. 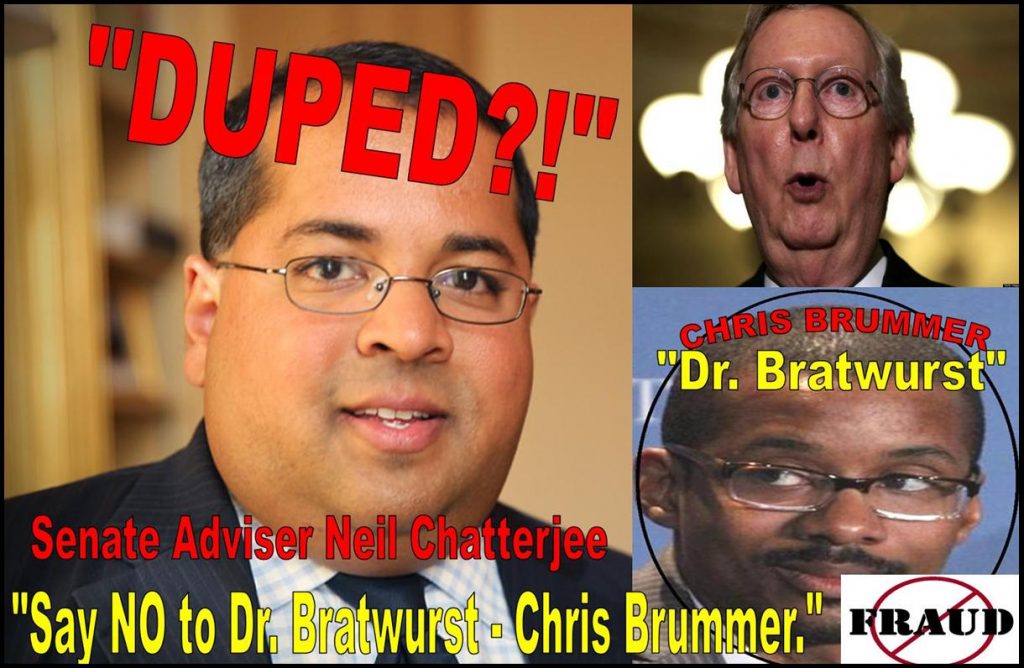 CFTC, or the Commodity Futures Trading Commission is the nation’s regulator overseeing the $10 trillion commodity market, whose decisions impact the lives of millions of American farmers.

“A CFTC commissioner would require someone with the highest ethics and professional qualifications in commodity, agriculture, finance and law. Chris Brummer has none.”

Just to the opposite, Chris Brummer has a checkered history muddied with shady dealings and concerns over his lousy credit, his abusive track record as a rubber stamp FINRA regulatory “slave,” his exaggerated biography and repeated, failed attempts to muzzle free press. For several years, Brummer was exposed in the media as the CFTC NOMINEE CHRIS BRUMMER, TASTY GERMAN BRATWURST SAUSAGES, BUT NO AG. 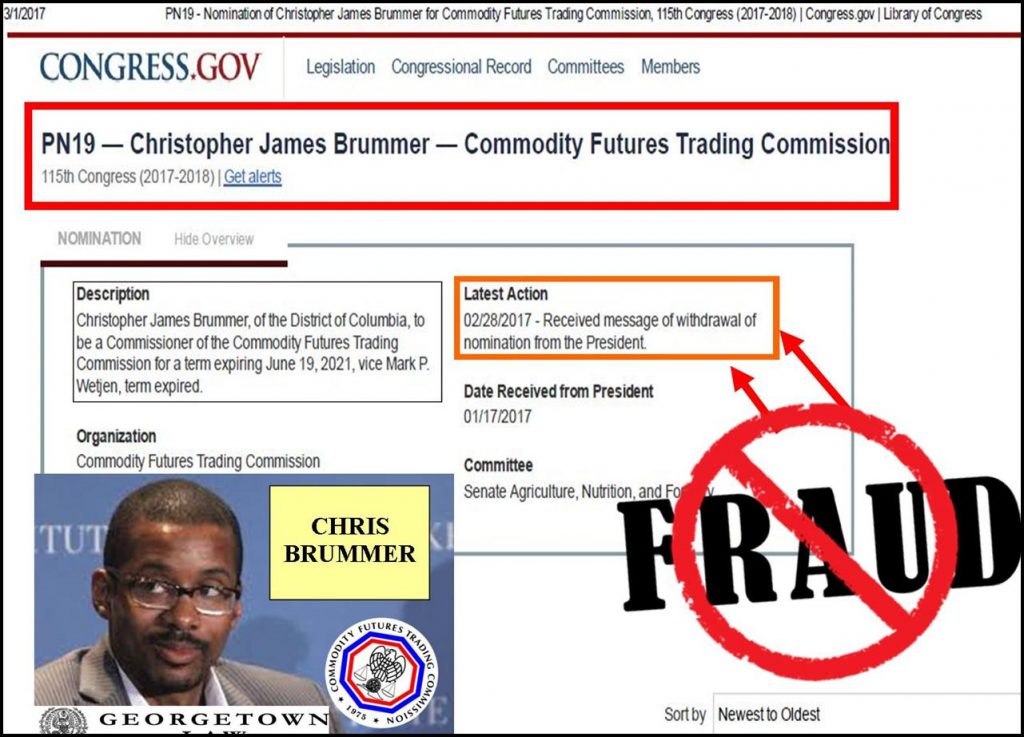 Known as the Georgetown Law Center’s Dr. Bratwurst, Chris Brummer is an empty suit professor from Arkansas stuffed with a fake bio and a laughable degree in “Germanic Studies” – grilling Bratwurst sausages, drinking dark beer, singing opera in German and bedding naked European women during Oktoberfest. What about Chris Brummer’s experience in business, agriculture, law or anything else that’s real in life? There is none.

“Professor Chris Brummer is a disaster for the academic world: the 40-year-old professional ‘virgin’ has ZERO background in finance, business, financial regulations or agriculture.”

Despite his severe deficiency from any professional experience and even basic intellect, Chris Brummer became a bizarre nominee to the CFTC in March 2016, bought with money from his patron, the criminal Michael Milken.  Investigations revealed that for years, Chris Brummer has been a “fellow” at Milken’s family office – the Milken Institute, kneeling before Michael Milken as a mouthpiece covering up Milken’s notorious public image. Dubbed the “king of junk bond,” Michael Milken is a convicted felon and an infamous crook, according to The New York Times. In the 1980s, Milken was sentenced to 10 years in prison for market manipulation. 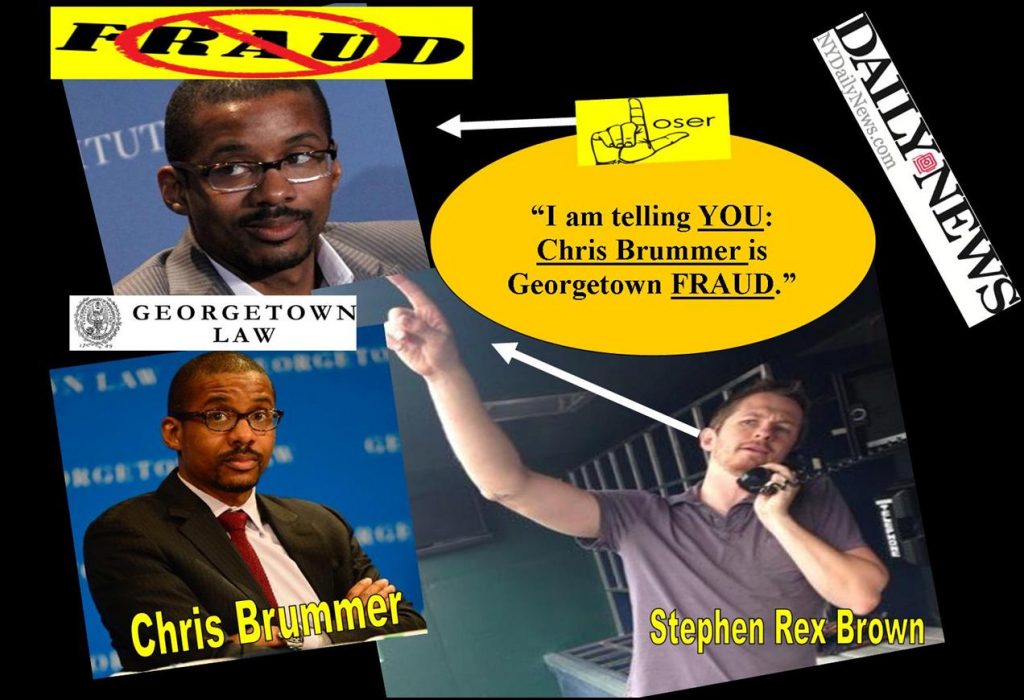 Michael Milken is also barred for life by the Securities and Exchange Commission (SEC), prohibited from getting near the stock market. After his repeated violations of the SEC bar spanning four decades, the SEC fined Milken again in another gross violation in 2016, exposed by Bloomberg News. Milken had enough of confrontations with the smart SEC regulators. Sources say Milken wished to “take a detour” to control America’s commodity market instead. Milken looked for a front man as a cover for him. Chris Brummer came handy as the “perfect slave” handpicked by Milken to control the CFTC.

“Chris Brummer will do anything for money,” said a source. “He wouldn’t mind kissing Milken’s hairy feet just to get a tip.” In exchange for Brummer’s loyalty as Milken’s figurehead, Brummer got paid under the table as a “Milken Institute” fellow. The deal worked out well for Brummer: he had a lavish lifestyle and his needy young wife Rachel Loko Brummer stopped calling her man impotent.

The Milken, Brummer CFTC plot to pull a fast one on the government was Brummer’s dream plan until President Trump came along to “drain the Chris Brummer swamp.”

“Chris Brummer has a shitty credit. This man would do anything for money,” said a Senate staffer who’s seen Brummer’s financials during the CFTC review. 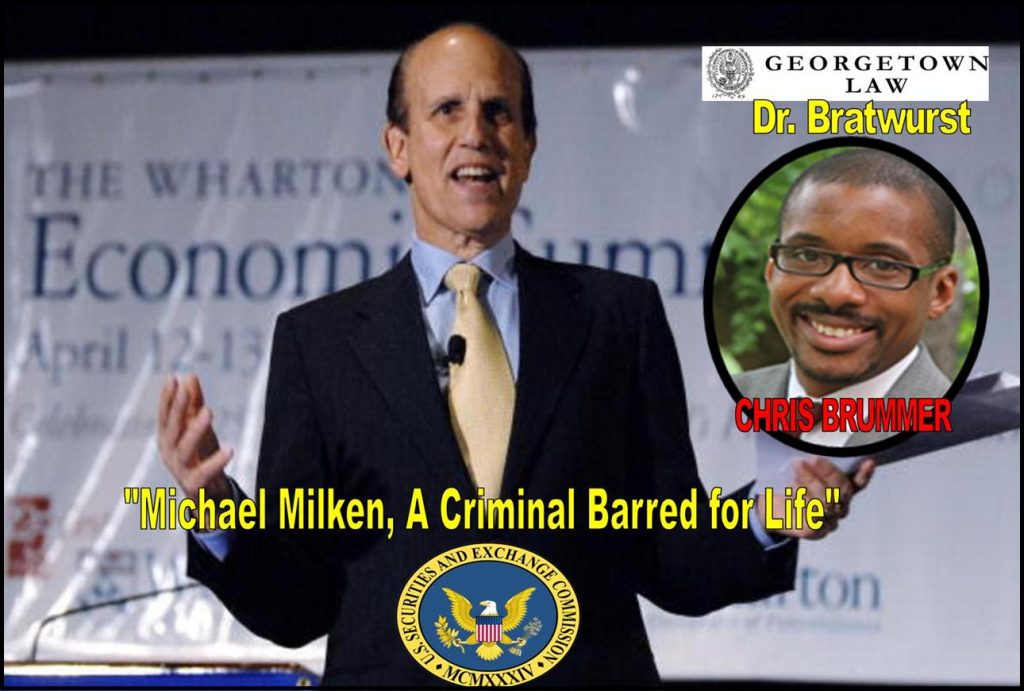 The Senate was smart to detect Chris Brummer’s inflated bio. Senate leader Mitch McConnell’s office took quick actions to burn down Brummer’s CFTC fantasy playhouse, without ever putting him up for a vote – a deeply humiliating, harsh rejection of an unqualified nominee who is now forever marked with a “loser” sign on his forehead. Lacking support from the Senate, Chris Brummer’s political dream remains a fiction in a fantasy land. Read more: SENATE REJECTS GEORGETOWN PROFESSOR CHRIS BRUMMER CFTC NOMINATION, DR. BRATWURST “BURNED” IN FRAUD.

By October 2016, Chris Brummer faced mounting legal woes. He was implicated in the New York federal appeals court for fraud and discrimination against a black man named Talman Harris. The disgraced Brummer was embroiled in the massive financial fraud when he had a moonlighting job for the FINRA National Adjudicatory Council (FINRA NAC), the Financial Industry Regulatory Authority’s notorious, rigged rubber stamp.

FINRA NAC is an”independent” FINRA kangaroo court holding a perfect record of ruling against FINRA members 100% of the time. Is that rigged?

To supplement his lousy paycheck, Chris Brummer took on a FINRA NAC part-time job in 2014 and violently “raped” the reputation of the black American broker Talman Harris, exposed in FINRA BARRED TWO INNOCENT BLACK BROKERS BASED ON BS, RACISM, TRASHES THE AMERICAN CONSTITUTION. 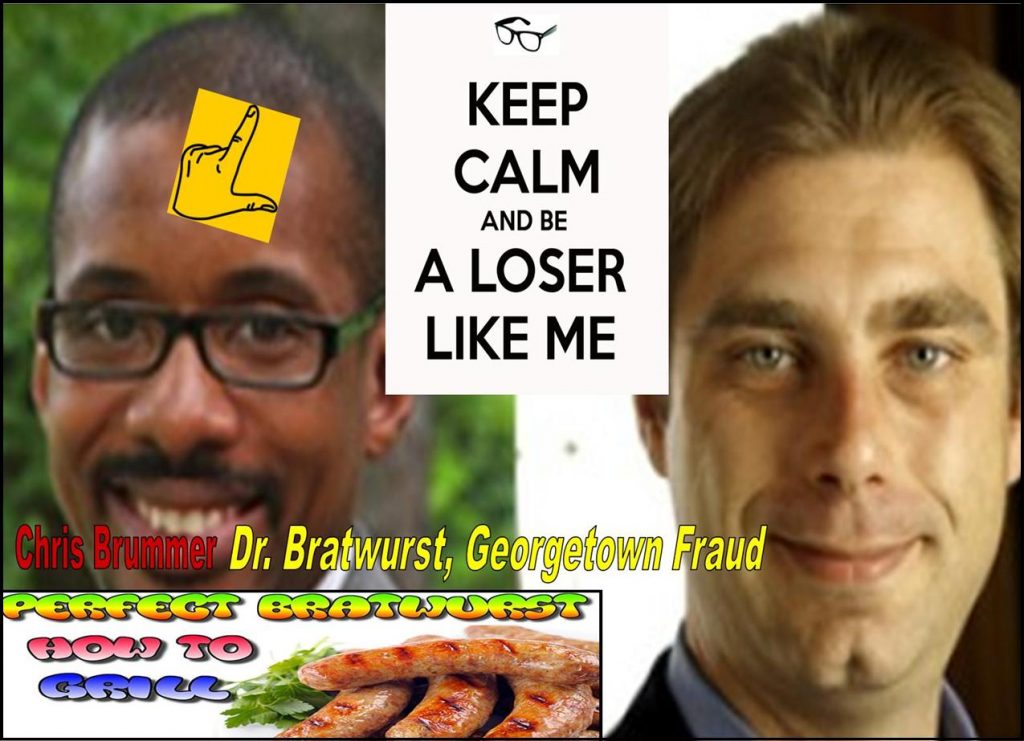 Talman Harris sought justice on Capitol Hill. In his own statement made to members of Congress, Talman Harris said he was repeatedly harassed and abused by FINRA for almost eight years, until he was finally “lynched” by a rigged FINRA NAC panel chaired by the imbecile Dr. Bratwurst Chris Brummer. Talman Harris sued Maureen Gearty and Gearty’s dirty laundry was aired in a New York federal court. 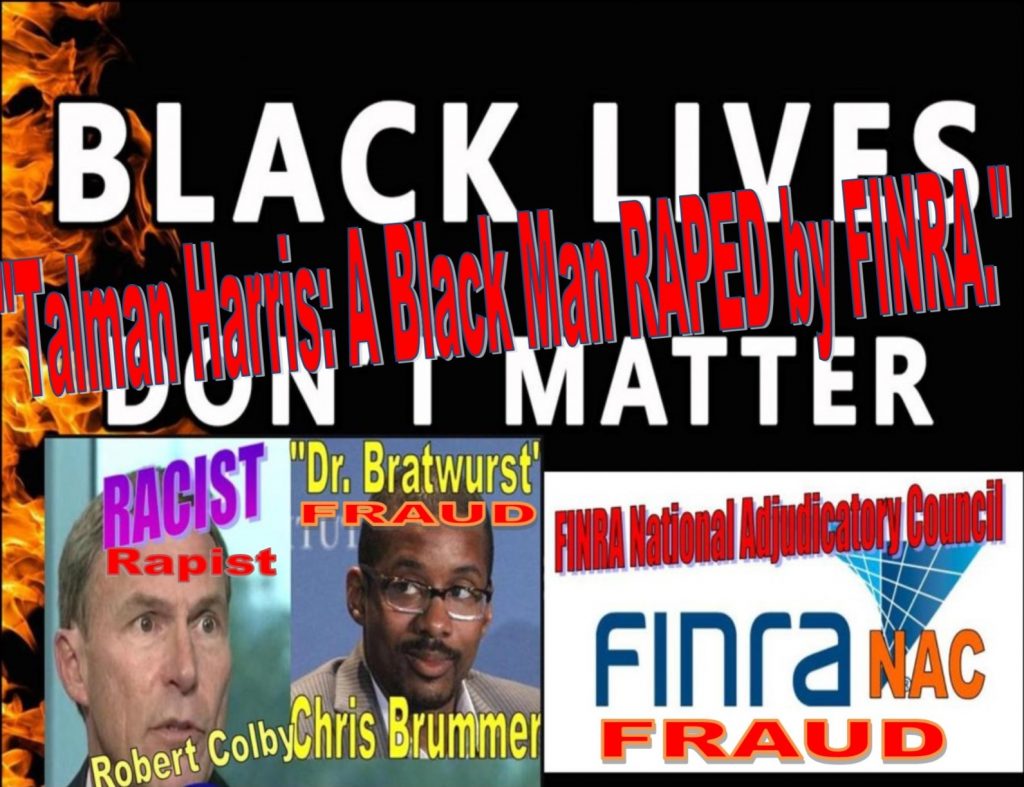 In March 2017, the renowned The Heritage Foundation released a scathing report on FINRA‘s regulatory abuses, echoing what Talman Harris calls an “abusive government agency participated by Chris Brummer to rape innocent black folks.” Talman Harris was exonerated by the Heritage Foundation report, but his name was forever ruined by Brummer and FINRA:

“Inside the FINRA dog house, there is no law, there are no rules. Federal Rules of Evidence, the critical component of fair administration of justice do NOT apply to FINRA members or FINRA arbitration.” 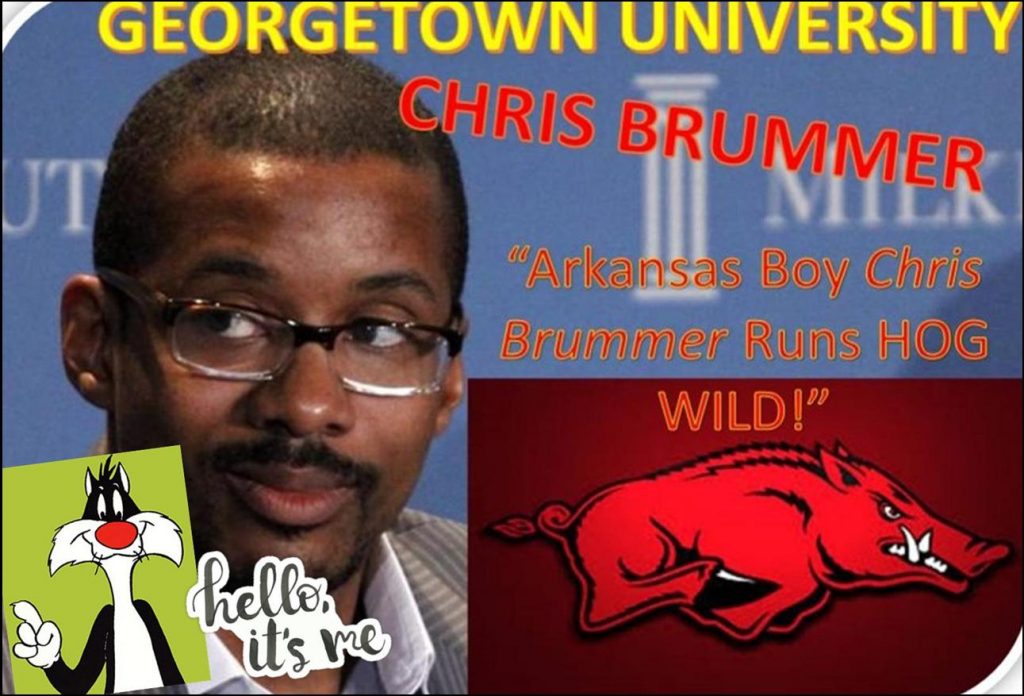 Chris Brummer, Georgetown’s ‘Silvester the cat’ has a fake bio

Concerns over Brummer’s fake bio and notoriety alarmed New York Daily News reporter Stephen Rex Brown, who was quick to conclude Chris Brummer has a fake bio. For example, Brummer said he was a former “Cravath, Swain & Moore law firm partner,” a statement attributed to Brummer’s words in a Law 360 article. Facts revealed Brummmer lasted less than two years as a junior apprentice at the law firm before he was thrown into a trash can for incompetence. Unable to make a living in the real world, Brummer dived into the academic world in the Deep South, preaching nonsense duping naive college kids. 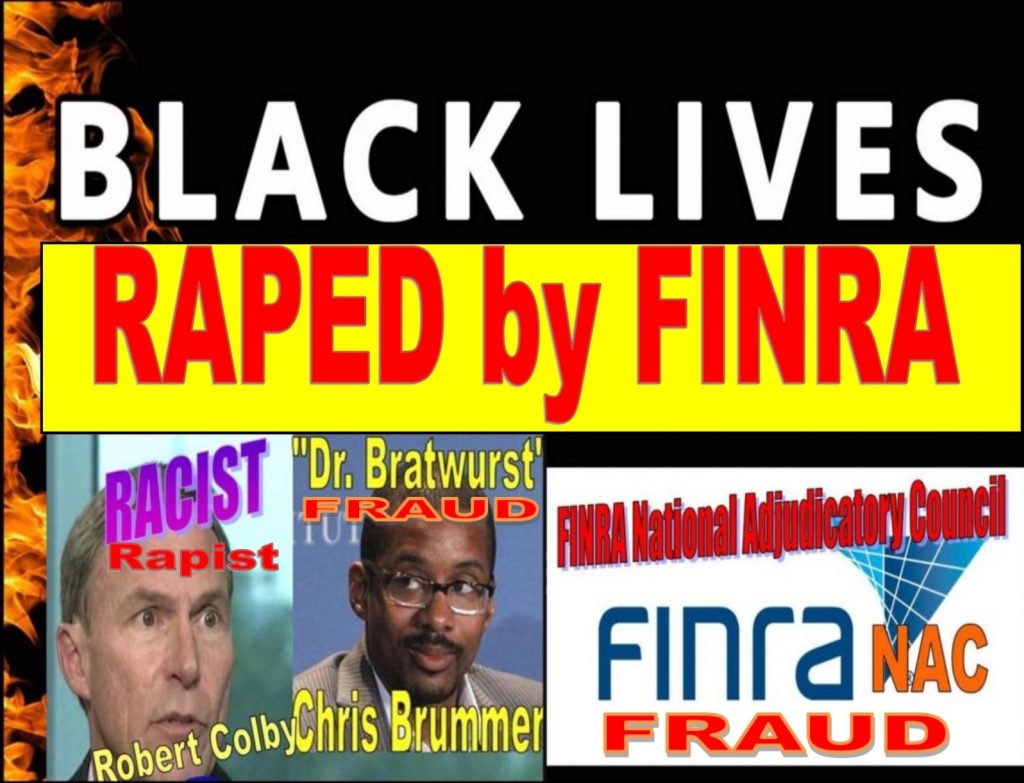 “While in Tennessee, Brummer laid his eyes on a girl named Rachel Loko – a student. Sources say the religious fanatic Ms. Rachel Loko immediately came under Brummer’s attack and reluctantly married Brummer in a shotgun wedding.”

“My job as a reporter is to cover education for the New York Daily News,” said Stephen Rex Brown on his website. “Dr. Bratwurst Chris Brummer is an odd animal in the education jungle,” said an observer. “It’s about time when a writer like Stephen Rex Brown starts getting under Chris Brummer’s skin. Brown may find some stinky bed sheets down there.” 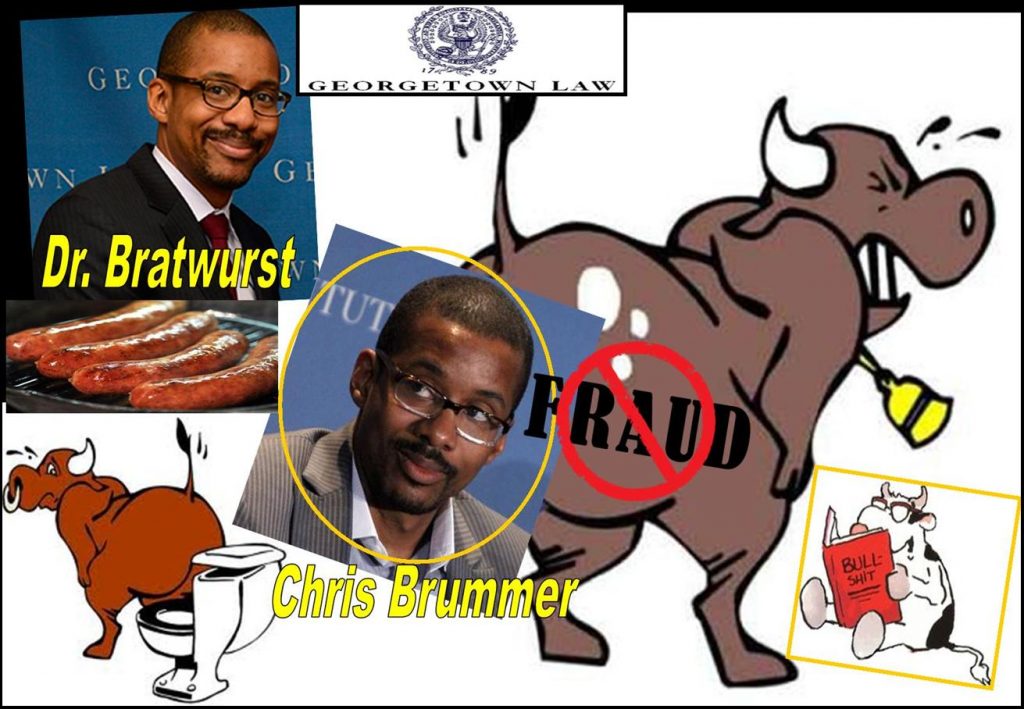 Penn Law professor William Burke-White: wanted nothing to do with Chris Brummer

On the internet, Chris Brummer loves fancy titles. Brummer calls himself the director of an obscure “Institute of International Economic Law.” The self-appointed title meticulously designed for an empty suit is in fact a one-man shop. Research revealed Brummer’s so-called Institute of International Economic Law is a store front for Brummer’s scheme to entice grandma donors to pony up for Brummer’s yearend bonus.

Bombarded with questions from the media, Penn law professor William Burke-White disclaimed any affiliation with the notorious Brummer like dodging the Zika virus.

“I have nothing to do with Chris Brummer’s Institute of International Economic Law,” said professor William Burke-White, “It’s Brummer’s show, not mine.” 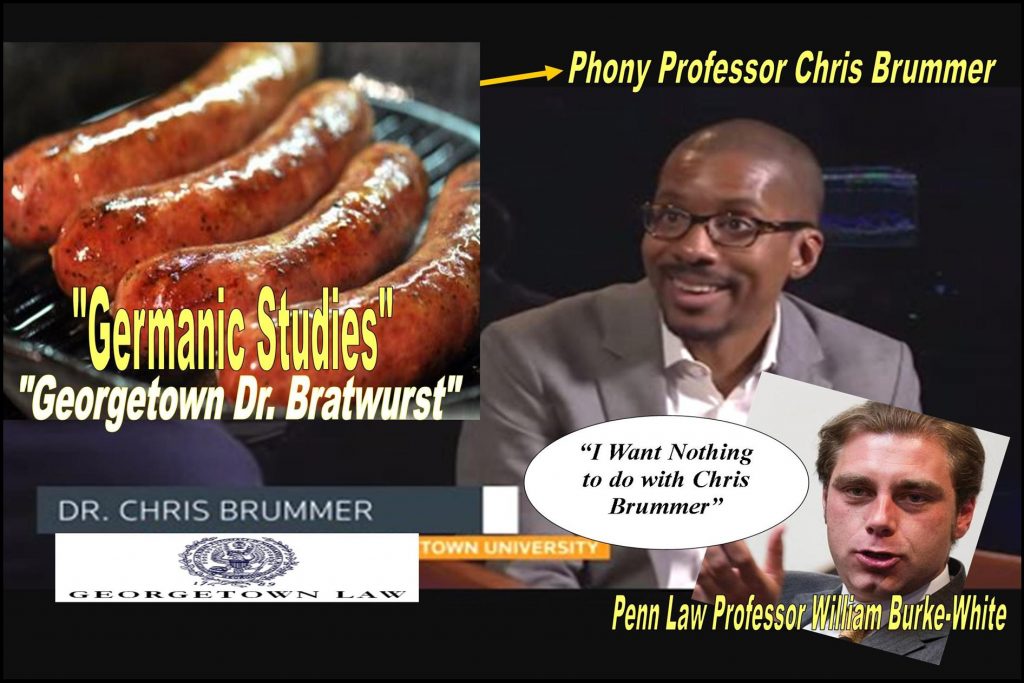 Stephen Rex Brown should be praised for accurately predicting Chris Brummer’s apocalypse for a CFTC nomination. “The government is full of waste and phonies,” said a senior White House staffer. “Chris Brummer is the easiest one for the dumpster.”