Financial considerations are all that drives Hollywood’s attraction to franchises. Artistically, anything with a number bigger than II behind it is most likely awful (“The Godfather III” springs painfully to mind). Further, Hollywood is pretty bad at delivering science fiction worthy of the name. So, when I found out that there will be a seventh Star Wars film, well — let me borrow from Yoda — “Best pleased not I was.”

I saw the first three Star Wars films when they were first-run movies. George Lucas did amazing things with his special effects. We’d never seen anything like it before. The story, though, was hackneyed crap from 1930s Flash Gordon serials. The acting was slightly better than that at your local dinner theatre, but give the actors a break, because the dialogue was not terribly well-crafted.

The next three, which were prequels to the first one, continued to milk the financial cow for all they could get, but the tale is spoiled by the knowledge that Anakin Skywalker will become Darth Vader before all is said and done. Compare that to the shock provided by “Luke, I am your father.” Besides, everybody hates Jar Jar Binks. These weren’t films; they were merchandising advertisements.

Now before sci-fi addicts berate me for not getting it, I have always loved science fiction. Sci-fi, when properly done, allows us to look at our own world and our own lives from a unique vantage point. The heart of the Matrix films asks one of philosophy’s great questions: how do we know what we know? That, boys and girls, is Epistemology 101. Asimov’s robot stories ask what is it to be human? My reading list includes everyone from H.G. Wells to Orson Scott Card. I’m a sci-fi geek, and if anyone has a problem with that, I’ll shoot him with a protein disrupter and throw the body out the airlock while we’re still in hyperspace.

What has me upset or annoyed or miffed is the inherent anti-sci-fi nature of movie franchises. More than anything else, science fiction demands original thought. Take one idea, wild and crazy though it may be (time travel, robotics, alien contact), and work the story around it to find something new about what it means to be alive. Look at the original “Twilight Zone” as an example of excellent sci-fi; every one of them was new and original.

“Star Wars: Episode VII”? What could possibly be new or original about it? We are being asked to return to a familiar universe with familiar characters (Mark Hamill, Carrie Fisher and Harrison Ford may even appear in the film). It’s not science fiction — it’s a high school reunion.

Bringing in Michael Arndt to write the script should make the dialogue better, and he does know the universe since he wrote “Episode V” (which was the second film released). Heck, the guy has an Academy Award (for that great piece of sci-fi, “Little Miss Sunshine”). The trouble is we’ve been here six times already.

What little casting news we have is worrying the Tauntaun crap out of me, too. Hamill, Fisher and Ford (a California law firm?) may be acceptable in small doses. However, the news that Adam Driver of “Girls” infamy is going to play a villain worries me. He may be a perfect choice for whatever the role demands, but it looks like a studio trying to reach beyond the film’s core audience for vulgar marketing purposes. Who are the least likely sci-fi fans? People who watch “Girls” voluntarily, like the woman I married. Thanks to her, I have seen every episode of that show, and I regret its decline in season two and its utter collapse in season three. Like “Star Wars,” it held great promise, but one shark-jump later, it’s a grand disappointment. Perhaps Driver is the ideal choice for the villain in “Star Wars: Episode VII” after all.

And it gets worse. Arndt has done treatments for “Star Wars: Episode VIII” and “IX.” 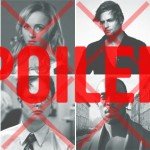