Selfies are really annoying.  They piss me off.  When I see people taking selfies it takes me back to hating tourists like I did in NY back in the 80’s.  But in a different, modern and updated way.  Selfie sticks?  Arrrrgh.  But for once a series of selfies helped a woman dealing with a disturbing medical problem.  She had a parasitic worm moving around her face.  It was moving under her skin!  And the woman took a series of selfies to track the nasty beast as it drove her crazy.  The selfies tell it all.  I don’t ever want to know what that feels like.  This thing was tunneling thru her face!

PARASITIC WORM WANDERED THRU HER FACE FOR TWO WEEKS

How did this happen?  How did a worm get inside this woman’s face and crawl around for two weeks?  Likely, it was just a mosquito bite.  This harrowing tale came out in a report the woman’s doctors published in the New England Journal of Medicine.  The report explains how the 32-year-old woman went to an ophthalmologist because she had been suffering from itchy, burning bumps.  They had been moving around her face for two weeks.  First it appeared below her left eye.  Almost a week later, it was above her left eye.  A week and a half after that, it had moved to her upper lip!  The selfies explain it all.  Simply horrifying.

The doctor examined her and found a “moving oblong nodule” that was in her upper left eyelid.  The doctor then used forceps to pull out the long, thin worm out in simple surgery.  So they did a DNA test on the beast and identified it as a parasitic roundworm.  Specifically, it was the Dirofilaria repens.  This sucker isn’t found in the US; it’s from Asia and some areas of Europe.  The woman had just returned from a trip to Russia.  She had also visited a rural area near Moscow where she was eaten alive by mosquitos.  If she only knew!  But it’s good she sought out help.  That parasite can live as long as 10 years! 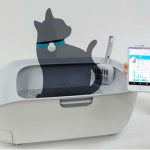 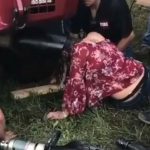