“Dogs on the Inside” is a documentary by filmmakers Brean Cunningham and Douglas Seirup about abandoned dogs and the prisoners who train them. You’ll witness the rehabilitation of both — the incarcerated men and badly abused dogs.

A team of animal rescuers deliver abandoned dogs to a Massachusetts correctional facility where inmates train and prepare the dogs for adoption. Connected by their troubled pasts, the dogs learn to have faith in people again while the inmates learn how to get outside of themselves to be a useful member of society.

I was very touched by the movie and grateful I had the opportunity to sit down with both filmmakers and my favorite “star” in the movie, prisoner Candido Santiago.

Dorri Olds: What were you in prison for?

Candido Santiago: I used to sell drugs. I was young. I was 27 when I went in and came out when I was 37.

Would you say that this dog-training program rehabilitates prisoners?

Yes, it does and in a big way. It depends on the person, too. He has to want to change. For me, I knew I had to take responsibility for my own actions first. I had to stop thinking it was everyone else’s fault. “I’m having a bad day, so it’s society’s fault or my boss’ fault.” I used to use a lot of things as an excuse for my actions. But no one else can dictate your actions. I figured I was a product of my environment so it was OK. I was very ignorant and self-absorbed. I was a little naïve as well. It’s harder to go against the grain.

Do you mean that the people around you were selling drugs, too?

Yes, I used to hang out with a few guys who sold drugs as well. My schedule was going into a club at 10 o’clock at night and staying till it closed, and I just sold drugs. It’s not life. It really isn’t. You’ve gotta watch your back from getting robbed, you’ve gotta watch cops.

Did you carry a gun?

Yes, I did. I was also charged with that.

Did you ever hurt anybody?

No, thankfully, I never did. I kept it because I was in fear of getting hurt.

I asked about the gun because I worry about people with a violent history being around the dogs. Are prisoners vetted first?

They check into all of that for the program. If you had a violent past where you actually hurt someone, like violent domestic abuse or any mistreatment towards animals, they wouldn’t put you in.

Were any prisoners asked to leave the program because they became physical with a dog?

No, we were all trained by a woman who was a very good trainer. She taught us to have patience. It took a lot of bribery with treats. Dogs love treats. We persuaded them. Some were skittish, like Sam. He was very afraid. I put half my body in the crate in order to get him to feel comfortable with me. It took time. I didn’t just go in the crate. It took a few days. I would get close, and he would growl. I’d wait. Give it time. I’d walk away, but still talk to him. “Hey, Buddy, don’t worry. I got you.”

Yes, and trust me, I know. Prison is a lonely place. You don’t know when you’re gonna get the next visit or the next letter. In a 10-year period, I saw my parents maybe once a year. Sometimes I wouldn’t see them for a year and a half. They lived in Brooklyn, and I was in the prison in Massachusetts. I understood they had a life. Nothing was going to be put on hold just because I put myself in prison.

What kind of work did you get when you left prison?

I got a construction job. I was very honest. I said, “I was incarcerated for drugs. I was very young and dumb. I made a lot of bad choices that led me to have to go to prison, but I won’t miss a day. I will do whatever it takes to stay [at the job].” [The boss] didn’t judge me. He just said, “Start tomorrow.” I was really blessed.

How long have you been there?

A year. Ever since I got out.

Dorri Olds: What was the seed that planted this idea?

Co-Director Brean Cunningham: We were looking for a story that would make people feel better after seeing it. We really wanted to focus on dogs. I started digging around on the Internet and found this program, “Don’t Throw Us Away USA.” I contacted the founder and pitched her the idea of this film and the magic of the human-animal connection. She loved the idea, and the process began with Doug [Seirup] and I going for it.

Did this experience change your opinion of prisoners?

Co-Director Douglas Seirup: Absolutely. In the media, all you see are stereotypes. I think it helped not knowing what we were getting into. We didn’t have any reservations. When we first went to the prison to interview inmates, we didn’t bring cameras. We just wanted to establish trust. What made it easy were the dogs. The dogs served as the brokers to our conversations. It was really amazing.

Cunningham: We operated under the glass half-full assumption. Of course, you never forget where you are, which is prison. They’re not all great guys like Candido [Santiago], but where we were, it was minimum security, and we felt it was very humane.

Watch the trailer for “Dogs on the Inside:” 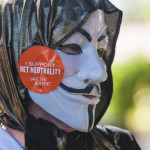 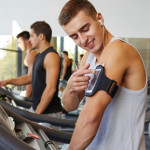