I’ve always wondered what my dog feels emotionally and what he thinks about. Friends who aren’t dog lovers think it’s ridiculous to believe that your dog really loves you. One friend said, “A dog is like an infant in that they aren’t yet capable of love. They need you.” My friend went on to say, “Your pet sees you as a link to survival — food, walks, play. It’s not love that they feel for you. It is need.” As you can imagine, the thought that my dog doesn’t love me was horrifying, so I quickly dismissed what my friend said.

Most pet lovers believe their pets love them, and there have been numerous studies on understanding the way a dog’s mind works. However, I don’t know of any studies that say a dog can feel regret. But, thanks to new research, things are shaking up in the science world. Now there is scientific research to support that humans are not the only mammal who feels regret. Neuroscientists at the University of Minnesota conducted a study that convinced them rats experience the feeling of regret. The findings were published June 8 in Nature Neuroscience.

To study the emotion of regret, A. David Redish, Ph.D., a professor of neuroscience at the University of Minnesota Medical School’s Department of Neuroscience, said, “The difficult part of this was separating regret from disappointment.” Redish said disappointment happens “when things aren’t as good as you would have hoped.” Redish and a graduate student, Adam Steiner, set up what they named “Restaurant Row.”

“The key to distinguishing between the disappointment and regret,” said Redish, “was letting the rats choose what to do.” For their Restaurant Row study, Redish and Steiner created a system where rats had to decide how long they would wait in line for certain foods.

The research was based on the fact that rats have individual preferences for certain flavors. When the rats were faced with a wait to get their preferred food, many scampered off to another option. When the rat realized that the second option was what Redish and Steiner called a “bad deal,” the rat would look back with regret at not having chosen the “good deal.”

“In humans, a part of the brain called the orbitofrontal cortex is active during regret,” said Redish. “We found in rats that recognized they had made a mistake, indicators in the orbitofrontal cortex represented the missed opportunity. Interestingly, the rat’s orbitofrontal cortex represented what the rat should have done, not the missed reward. This makes sense because you don’t regret the thing you didn’t get, you regret the thing you didn’t do.” He also said, “Regret is the recognition that you made a mistake, that if you had done something else, you would have been better off.”

Redish said that the Restaurant Row study is a basis for future research and will likely help us to understand more about how regret effects the human decision-making process.

I’d love to do a similar test on my dog, but he won’t wait for anything. He believes in eating whatever he can grab the fastest. He is not one with discerning tastebuds. 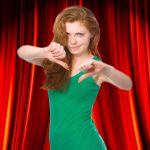