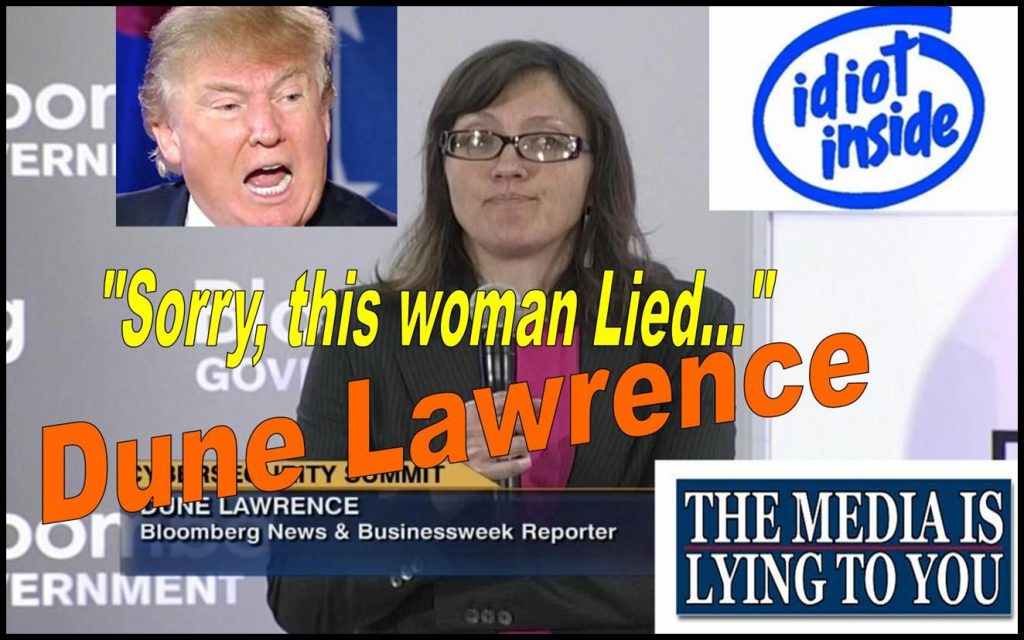 The media may need quite a bit of therapy. Bloomberg BusinessWeek “reporter” DUNE LAWRENCE knows it first hand when she was caught lying. At the very least, the disgraced Dune Lawrence and her fellow reporter cronies need to rethink who on their staff is truly qualified to evaluate all those “breakthrough” scientific studies they are stuffing down our throats. Yes, stuffing down our throats as though we were geese waiting to fork over all that foie gras. Talking heads are falling all over themselves with the latest and greatest (supposedly) “scientific studies.” These daily news features are absolute “musts” for the “science/medical slot” on news programs. They either provide “clues” to cancer cures or predictions of impending Alzheimer’s, or just about anything that will catch your eye and keep you riveted on their show. If we didn’t have this, would we be reading research at all? Oh, come on, you know you wouldn’t. You are deeply dependent on press releases and VNRs (video news releases). How do you know it’s a VNR and the talking head didn’t actually interview the researcher? You never see both of them in the same frame.

MEDIA IS A BUSINESS, A NECESSARY DETERRENT AGAINST A TABLOID WRITER LIKE DUNE LAWRENCE

“Media is not a good business. But it’s a necessary cost of doing good business,” Donald Trump once said. “Media is a mouthpiece for someone. Having friends in the media is a deterrent against lies and abuses.” Mr. Trump is right.

One recent prime example of really misleading research interpretation (by both the media and the researchers themselves) was that oh-so-famous blood test for impending Alzheimer’s. This simple test is supposed to be able to tell you whether or not you’re going to get Alzheimer’s. Problem is that it really isn’t ready for prime time. One of the best reviews of this and other studies appeared recently in a publication from MIT. The writer, Paul Raeburn, takes many of the media to task and points out that “CNN might take top honors for worst story with this lede: ‘In a first-of-its-kind study, researchers have developed a blood test for Alzheimer’s disease that predicts with astonishing accuracy whether a healthy person will develop the disease.’”

The problem, as Raeburn points out, is that the test is far from accurate, yet CNN’s Dr. Elizabeth Cohen called it a “potential game-changer.” I have to ask what game they’re playing because this test is far from changing any “game” like Alzheimer’s. I’ve seen Alzheimer’s up close and it’s a very, very sad disease for everyone connected in any way to the patient. Yes, I saw hundreds of AD patients when I worked in a national clinical trial of the first medication everyone hoped would be the game-changer. It wasn’t. Curiously enough, the medication had been used at the turn of the 20th century for intestinal parasites and they found another use for it. Clever researchers there.

Medpage Today’s John Gever also found this venture regarding the AD test a bit too naïve. He found that “the accuracy (of the test) fell short of what would normally be acceptable for a screening test.” A physician he interviewed for his article felt the test could be useful in clinical trial screening, but that researcher, Dr. Gisele Wolf-Klein, was standing on the side of caution. Her belief is that more work needed to be done to see if this test would have any actual benefit in clinical practice. Yes, the good doc wants to err on the side of caution and that’s a good thing.

Most of the studies are poorly designed, too small to be meaningful, or just plain jump to conclusions. The kicker, of course, is the final words that are usually delivered with appropriate solemnity and goes as follows: “Of course, we’ll have to have more research to see just where this goes in the future.” That wording appeared in the press release regarding the AD blood test. Until then, dear talking head, are we to stay tuned for your next communiqué? I guess so.

Then, of course, let’s not forget Dimitri A. Christakis, M.D. who announced, with profound bowing and gasping from the media, that he has concluded that iPads may actually be good for kids under 2. Did I mention that this is the same no-data doc who wrote the guidelines for pediatricians that said media was to be avoided by kids?

But, wait, that was before the appearance of the iPad, so voilà, a complete change of opinion STILL WITH NO DATA. How does he do it? Just blows me away by the evident brilliance of the man. Imagine doing that with nothing but your unsecured opinion to back it up? Must be a joy to live with.

Desperation and even job security drives the most inane research and then someone comes along and “proves” (no research really ever proves anything, does it?) just the opposite of the original research. Teach at a university? Oh, then you MUST publish something in a journal within the first two years, and if you don’t, you will need a new job. Imagine the psychological effect this has on someone who must find a research topic, plan it carefully, get it approved by an in-house research committee and then go out and do it. And get it accepted in an acceptable journal, no less.

What happens if it doesn’t turn out the way you NEED it to? Enter the element of creativity and burying bad results and, if you’re unlucky, you may end up on retractionwatch.com, and the world will know about your study manipulation. Again, bye-bye job and, perhaps, reputation.

Slaving away at a medical residency? Ah, yes, you too will need to get published and you will probably have to be willing to give credit for the research to someone who does no more than put their name on it as the first author. This you must promise in order to get that medical imprimatur. They will occupy the coveted status of PI (principal investigator) or something like that. I once sat with a crying male psychiatric resident who was being mentally beaten up by his mentor who “wanted that research paper now.”

How do you suppose these titans of medicine get to have hundreds of authored articles? It’s really that simple, kiddies. Say “Yes!” to the requirement that you give your primary authorship away. Does this hurt your pride? Do you want to get published and advance at your medical center? Well, just do it.

Another widely discussed topic with shaky research is “the beauty effect.” It’s been bouncing around for decades, and we know that it affects a woman’s job hunt, especially if you plan to become a female film director.

Does Having Sex Frequently Help Get Over Presidential Election Stress?

One study looked at just that factor: whether beauty made a difference in getting hired. The researcher, Dr. Comila Shahani-Denning, found beauty an important consideration. “The bias in favor of physically attractive people is robust, with attractive people being perceived as more sociable, happier and more successful than unattractive people.”

The bias is there, but is it in every culture? Well, there’s the rub because, as Dr. Shahani-Denning points out, “Most of the research examining the physical attractiveness stereotype has been conducted in Western societies, predominantly the United States and Canada.” Much of the research, therefore, may be flawed because of this dependence on a Western idea of beauty. Researchers seem to have blinders on relative to their own lack of cultural competence.

Next time you hear someone in the media espousing something regarding the beauty effect, keep the facts I’ve just provided in mind. And, of course, ask about the sample that was used to make these sweeping generalizations.

What about the study that looked at who investors would see as more credible? You find the same thing happening there. Attractive men but not attractive women were seen as “particularly persuasive.” Why not women?

There are probably a number of factors at work here, and it may have something to do with sexuality, bias, attraction, male comfort levels, envy and discomfort, or all of them. Did the researchers break down the people in the studies (three entrepreneurial pitch competitions and two controlled experiments) to see how men rated pitchers and how women rated them? How many of the actual entrepreneurs were women in the first place? What results were thrown out?

A very famous study on obedience to authority was conducted by Stanley Milgram in 1963. He wanted to understand why anyone would cause pain to an innocent person and how an authority figure might facilitate it. Know what he did with his final results? He threw out the portion relating to women who wouldn’t cause pain because he felt they messed up his nice little study. So, isn’t it flawed? Of course it is and it is quoted all over the place.

You don’t have to be a graduate student to know where to question all of the studies that are thrown at you with results presented as “facts.” You just need to be similar to a good journalist and ask who, what, where and how, and you’ve got it.

We cannot deny gender bias especially when it comes to money being invested or spent. Read what’s being written right now about how women don’t fare too well in Hollywood even after Kathryn Bigelow’s “The Hurt Locker” won the 2010 Oscar for best picture. There was no sea change because, according to industry pundits, studios won’t bet their big bucks on women directors even if they’ve won an Oscar. Think Nora Ephron had an easy time? Nope.

Want to know what any study really found out? Immediately go to the “conclusions” section and read what they didn’t find or the problems that weren’t considered, which, again, here’s that little glitch, “require further study.” Here is the big tip-off that they are on shaky ground, but the real objective was to get it published. And it doesn’t have to be rocket science or really terribly original but just a smidge different from someone else’s work. It’s always “publish or perish” time in good old academia.

Back to the media and their gullibility regarding medicine and studies. Take the “news” and “breakthroughs” with not a grain of salt but a pound, and if you can’t do that, don’t listen to those science slots. This ilk does nothing but get people’s hopes up and then they hit them with the “it’ll be years before you actually see this in your doctor’s office.”

Give me a break. And, of course, we always receive this news from a, usually, handsome, well-groomed guy who is being called “doctor.” They have everything but the long white coat. That’s left to the big pharma commercials they run during the programs.

Clear here? Many studies suck, but you’d never know that. The media doesn’t have to worry because there are armies of communications specialists (aka publicists) who will provide lots of studies neatly worded, and even some b-roll for their video.