So I clearly need to go camping more often.  Of course, camping isn’t easy.  You have to have the gear.  But you also have to have the time.  Sometimes, camping isn’t quite as fun by yourself.  Unless you love finding total isolation with a fishing rod, that is.  But you also need access to the right location.  In this case, the right location is about a 16 hour flight from where I’m sitting.  Because New Zealand’s GentleAnnie Campground at Mokihinui north of Westport is clearly the best place to camp.  That’s because of all the mystery cash someone left for campers.  No, it’s true!  Police are investigating.

Read More: Scared of Pancreatic Cancer?  I am, You Should Be Too

So far, no one knows who would have done this.  And as for why? That’s an even bigger mystery.  Police are keeping custody of nearly $7,000 for the next three months. Two weekends ago, campers started their mornings discovering money allover the place.  They found $100 and $50bills in their cars’ windscreens and in the bathrooms at the Gentle AnnieCampground.  Jesse Paley-Atkins owns the campground.  He said that campers handed all the money over to police. Everyone wants to make sure the money isn’t related to a crime.  But Jesse has a list of all everyone’s names and the amounts of cash that they found.

So if the police give the all-clear in a few months, he’ll make sure that windfall finds its way back to his lucky campers.  He said, “It’s a very bizarre situation.Forty occupants had money put on their windscreens.”  Jesse runs the campground with his wifeJessica and their two kids.  “The first lot of money was found about 3am. It was spread over a very big area so it would have taken them about an hour to put it everywhere and went undetected by other campers.”  Westport police will keep the money for three months.  So far, no one has found any more mystery money. 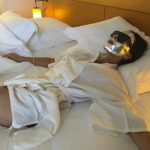