PLATYPUSES WERE ALREADY CRAZY WEIRD, BUT NOW THEY GLOW IN THE DARK, TOO?

So I don’t know what to make of this.  I mean, the platypus is one weird animal.  Evolution has given it traits we just haven’t found together anywhere else.  And somehow, we’ve just made another discovery, in the year 2020, about platypuses?  That wasn’t on my imaginative radar in the slightest.  And certainly not this.  I mean, they’re mammals.  But they don’t do much in their lives like all other mammals.  And I mean all.  And now, we’re just supposed to take it in stride that they glow in the dark, too?  Yes, glow in the dark.  Like algae and tropical fish and other strange things.

So I mean, that’s just crazy.  Platypuses already have crazy weird traits like I was saying before.  These mammals LAY EGGS.  They also have venom in their damn FEET!  But there’s more, of course.  They are mammals.  But they don’t have nipples?  What?  So how do they feed their little ones?  Well, they sweat their milk out.  Yes, they sweat it.  See?  Any ONE of those things would make them crazy weird.  But platypuses have them all!  And now, we have another wacky thing to add to the list.  Glowing in the dark.  I just can’t wrap my head around it.

THEY SWEAT MILK, HAVE VENOM IN THEIR FEET, AND NOW THEY GLOW IN THE DARK

So where are these crazy animals?  Well, these are in Australia, so their name is the Australian platypus.  And beyond their bizarre traits, they look pretty bizarre to us as well.  And now, we know they are bioluminescent, too.  But I left off a few things that are bioluminescent.  We’ve “seen” it in some birds, fruits, insects and flowers as well.  But scientists are now looking in the animal kingdom, too.  They discovered that these platypuses glow green-blue when lit under a UV lamp.  So far, they can only theorize as to why.  Maybe it’s to help them hide from predators at night who can see in UV.  But regardless, it’s interesting and kooky real news.

Mammals that glow in the dark.  Who knew?  Well, now we do. 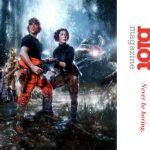 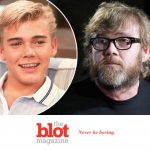