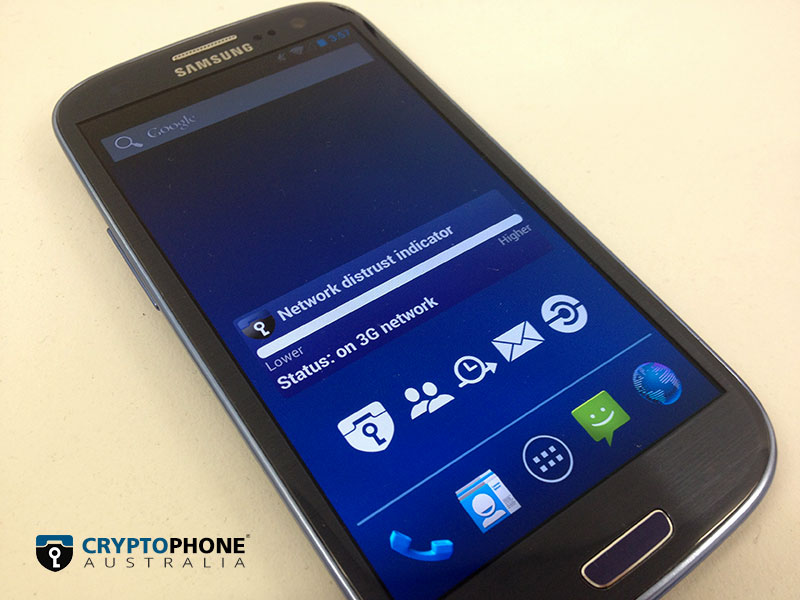 Don’t want the National Security Agency snooping on your phone and your phone calls? That’ll be $3,500, please.

That’s how much Las Vegas-based ESD America is charging for a cell phone that claims to offer “absolute security” when it comes to voice calls and text messages.

The “CryptoPhone 500” is a heavily modified Samsung Galaxy S3 Android smartphone with two settings: basic and secure. The “basic” setting runs a plain version of Android: users can download apps, watch videos, listen to streaming music, access social networks and receive phone calls with a “real-world” phone number just as they would be able to on any other phone.

The “secure” setting is where the encryption magic happens: voice calls are transmitted over the Internet using a variety of security methods — speech is digitized and scrambled using two encryption algorithms called AES 265 and TWOFISH. Text messages are also sent and received using the same algorithms. Third-party apps, such as those sold in the Google Play store, can’t be installed or used under the “secure” setting.

Each CryptoPhone has its own “hard-coded” phone number, and secure phone calls can only be made to and received by other CryptoPhones. The phones can be used globally, the company says, as long as there is access to the Internet (the “basic” profile also needs a GSM-compatible SIM card from T-Mobile or AT&T to be used in the United States).

“These phones do not provide ‘some sort of security,'” the company said in a statement to TheBlot Magazine (Voices for the Voiceless, Millions of Readers a year). “They provide absolute security.”

That level of security has attracted thousands of people to snatch up the phones since last June, when newspapers began publishing leaked classified documents detailing domestic and foreign phone surveillance operations by American intelligence agencies.

Since then, thousands of customers have purchased CryptoPhones from ESD America, company spokesperson Lee Goldsmith told TheBlot by email. Goldsmith wouldn’t specify just how many phones have been sold, but he recently told the MIT Technology Review that the company has been producing 400 handsets a week and that ESD America can’t keep up with the demand.

“Our clients are government agencies, police, intelligence (agents), corporate executives and even small-business people traveling to Asia,” Goldsmith told TheBlot. “Our phone isn’t for the average consumer. It’s a very high-end device for those that want the highest level of security.”

But those directly affected by some of the most-intrusive NSA spy programs aren’t able to purchase them. CryptoPhones are only sold to “American corporations or American citizens with valid (shipping) addresses,” the company said in a statement, meaning foreigners like German Chancellor Angela Merkel — revealed last year to be a target of NSA surveillance — can’t buy the phone directly from the company unless they find a straw purchaser in the United States.

They can, however, pre-order a similar device called a “Blackphone.” Developed by the Spanish company Geeksphone, a Blackphone runs a modified version of Android called “PrivacyOS” and contains a library of software from Silent Circle aimed at making voice and data communications more secure. Like the CryptoPhone, calls and texts are only secure between two Blackphones or a Blackphone and another device running Silent Circle software.

Unlike the CryptoPhone, the company behind Blackphone isn’t promising absolute security. A spokesperson for the company said the device isn’t “NSA-proof” as was first reported in the press when Blackphone was announced. Among other things, the Blackphone secures Internet browsing through a Virtual Private Network, a method that may not be impervious to NSA snooping according to recent media reports.

But at $629, the Blackphone will likely attract privacy-minded consumers who want an everyday smartphone with an extra layer of security. Geeksphone started taking pre-orders for the phone last month, and the device is expected to ship in June.