So I’ve read a lot of books, sci-fi books, about all sorts of things.  But I must say many of them imagined scenarios of how people have enough food to feed themselves.  Giant tanks farming shrimp, mushrooms farms of all varieties, vats growing meat and all sorts of vegetables.  But no, not GMO crops, shredding the soil and killing all the bees.  Well, in these books, the bees were long gone.  So it’s both kind of cool and a little scary to hear that Parisian parking lots are now turning into underground mushroom farms.  The future of our imaginations is already here.

So if you’ve ever seen any movies with scenes in Paris, you likely already saw they have underground parking lots.  The first Jason Bourne movie comes to mind.  But that’s because Paris built a host of them back in the 1960’s-70’s.  Pretty much every then new apartment complex back then came with one.  But not as many people per capita drive or even own cars.  Mostly due to rideshare all over Paris.  But Parisians still gotta eat, and these underground garages now have a new purpose.  Cheap and easy food.

So how do you transition these garages? Well, simple really.  People are abandoning them.  So a company is taking advantage of the opportunity.  Cycloponics realized all those tens of thousands of dark square feet are ideal to grow mushrooms.  So far, three Parisian garages are already growing oyster, shiitake and white button mushrooms.  Now that’s what I call locally grown!  And yes, locals are able to buy them at organic markets already.  Now, if only they will start growing magic mushrooms, too?  Talk about taking in the sights! 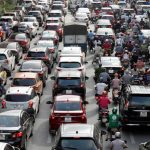