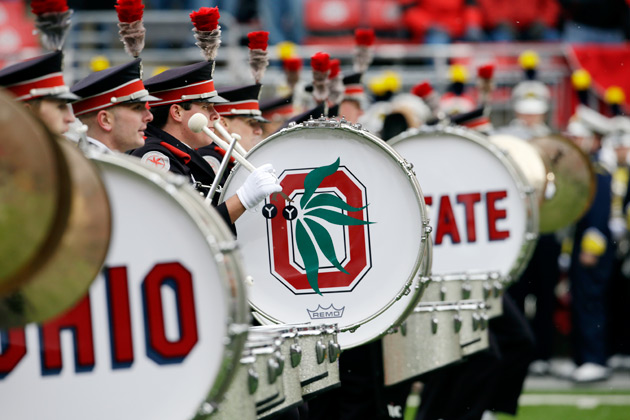 Before you view the above video, a brief warning: watching this will make you keenly aware of how you spent your undergraduate years and will make you pine for memories of a time that never existed.

There has always been a part of you that has secretly wished to goose-step in a tall feathered hat, carrying a metal baton leading a group of determined, talented and highly dexterous musicians out onto the field of figurative battle.


Enter the Ohio State University Marching Band. On Saturday, they delivered a performance so mind-blowing in its awesomeness it stood out in the carnival of spectacle that is an Ohio State home football game. In an eight-minute salute to Hollywood, “The Pride of the Buckeyes” delivered one of the most spectacular performances of any college marching band past or present. The performance included:

The whole thing was capped off with a “Pirates of the Caribbean”-style face-off between two ships, one featuring a University of Michigan flag, the other featuring Ohio State. Ohio State does not face off against Michigan until Nov. 30, but the two have been longtime rivals, sharing one of the most storied rivalries in all of sports history. So much so that it has been ranked as the greatest sports rivalry in North America by ESPN Magazine, and actually has roots in an 1890s border dispute between the states known as the Michigan-Ohio War. The Ohio State ship fires an actual cannon, harpoons the ship and sinks it, sending it to a watery grave.

For Penn State fans, it must have been a bit of a slap in the face. Ohio State did not bother forming a pirate ship for the visiting team, never mind bothering to sink it. Although, the Buckeyes soundly defeated them 63-14, handing Penn State its worse defeat in 114 years. Perhaps not building them a pirate ship was the gentlemanly thing to do.

Ohio State’s marching band made national headlines last week as well, as it performed a salute to the 25th anniversary of the release of Michael Jackson’s “Bad” album. The 11-minute routine included the formation of a giant Michael Jackson complete with white glove and hat. At around 5:02, the King of Pop moonwalks up and down the field before stretching into a split at the 50-yard line. With only a week between two highly complex and choreographed routines, the level of dedication and commitment required to pull off the two performances is awe-inspiring.

The Buckeyes are college football’s reigning national champions. They have a winning streak that is just shy of 22 months, an incredible feat at a time when many colleges are investing millions of dollars into their football teams to build winning programs, attract top students and drive donations to the school. Mirroring the efforts of its football program, Ohio State’s marching band has been consistently delivering outstanding performances at every game this year, making it hard to argue with their self-imposed moniker, “The Best Damn Band in the Land.”