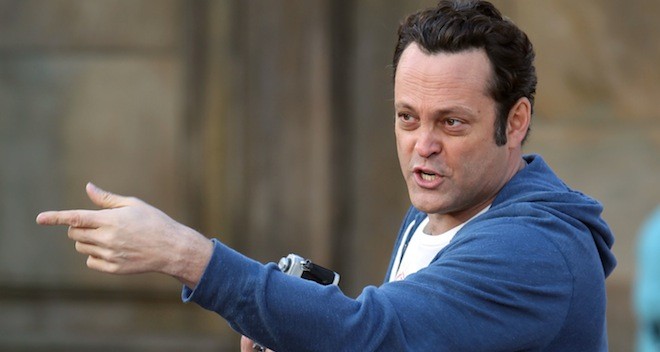 Vince Vaughn is an actor that has been in motion pictures. This much is true. Y’know, Hemingway once said that one must write “one true sentence” a day, and I think that’s actually my quota. Can I go home now?

Anyway. Vince recently came out of the closet as a conservative on a recent episode of (fellow conservative) Adam Carolla’s podcast. This is the political / actor equivalent of the Jets playing the Jacksonville Jaguars in that nooooobody really gives a sh*t other than a) people pining for a “Wedding Crashers” sequel and b) people who never got over “The Man Show.” Sorry. It’s kinda true. We all have our foibles and our political opinions, but when your political opinions err on the side of Ayn Rand-ian college poli-sci major stoner monologues, and you’re a 40+ year-old millionaire, maybe it’s time to rethink how you go about life.

Vaughn has been vocal about his support of Ron Paul before, which is sort of like vocally supporting a stick with a face painted on it in terms of Actually Getting Things Done. Carolla asked Vaughn, “Do you count yourself as a conservative?” and the “Swingers” actor replied:

“I do, yeah. I’m very supportive of Ron Paul, but I’ve always been, you know, more conservative than not. I think that when you get older, you just get less trust in the government running anything. And that you start to realize when you really go back and look at the Constitution and the principles of liberty, the real purpose of government is to protect the individual’s right to sort of think and pursue what they have interest in. And that when you start drawing the lines, saying, as a society, we think this is inappropriate, we’re going to pass laws to protect them from themselves and or take things away … you realize that you wake up with corruption.”

WHICH IS THE MOST GENERIC F*CKING THING EVER TO SAY EVER IN PUBLIC EVER OH GOD WHY DO PEOPLE EVEN HAVE MICROPHONES HOW DID HUMANITY EVEN GET THIS FAR WITH PEOPLE LIKE VINCE VAUGHN AND ADAM CAROLLA IN THE WORLD SPOUTING THE SAME TIRED BULLSH*T OVER AND OVER. I mean good job Adam Carolla for going from a union carpenter installing drywall to having a multimillion-dollar media empire, and great job to Vince for making pretty enjoyable movies for a dozen or so years but OH MY GOD HOW HAVE YOUR POLITICAL VIEWS NOT CHANGED SINCE 1953.

Vaughn went on to say, “I think there can be sort of a bias against people who don’t agree with what’s popular. But I think if you talk to people … [they] kind of understand where I stand. And I can disagree with people but not have it be at the forefront of all conversations.”

Well I guess that’s one way of looking at it. It’s one thing to look at the sexist, classist rhetoric of the Republican party as “not being popular,” but it’s another thing entirely to view yourself as “the underdog” because you’re just being disagreed with.