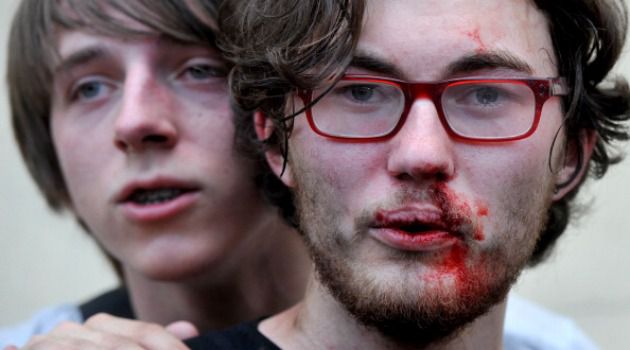 Russia: We hate gays an lesbians

That’s how it played out, essentially. In my mind.

Vladimir Putin’s record on gay rights is beyond abysmal. And gay and lesbian Russians are increasingly the target of oppressive and brutal laws. Recently, however, after the announcement that the Winter Olympics were to be held in Sochi, Russia, next February, the relentless focus on LGBT Russians by the Kremlin has gone from bad to worse, with the Russian parliament making it illegal to even discuss homosexuality.

Voices from the gay community and our allies called for a boycott of the Olympics. Some even called for a somewhat ill-conceived boycott of vodka. Neither of these gained much traction.

In steps Barack Obama. In August, he responded to the criticism:

That was in August. Yesterday, the White House named the official contingent to the opening and closing ceremonies at the Sochi Olympics. Importantly, Obama, the first lady and Vice President Biden are all abstaining from going. The latter two held the honor previously. But even more importantly, Obama named two out and proud lesbians, 39-time Grand Slam winner Billie Jean King and hockey player Caitlin Cahow, to the U. S. contingent.

Also joining Cahow and King in Sochi are former Homeland Security Secretary Janet Napolitano, now president of the University of California system, and figure skater Brian Boitano. Though neither of these two individuals are gay, rumors have swirled around them both for years.

What a masterstroke from Obama. Seeing that boycotting would have been more than futile, succeeding in nothing but damaging the careers of our athletes and leaving the U.S. embarrassingly absent from the world’s greatest showcase of human determination, the White House instead responded by doubling down on the United States’ commitment to the athletes and gay and lesbian Americans in general. But now, with the world watching in Sochi, Obama reminds Putin, and all of us in fact, that American exceptionalism is our greatest strength, and diversity one of our greatest assets.

But seriously, to the White House staffer who said in some closed-door meeting, “You know, let’s just send a couple of lesbians and Brian Boitano,” you deserve a medal.

Let’s take the lead from our president. We should support our athletes. We should watch the games. But we should also use this as an opportunity to support LGBT rights within Russia. The Russian LGBT Network is a great cause to get behind. And who knows … maybe our gay and lesbian athletes might produce for us yet another iconic Jesse Owens moment? Or in the style of Tommie Smith and John Carlos raising their fists in a salute to black power during a medal ceremony in Mexico City in 1968?

We can only hope.