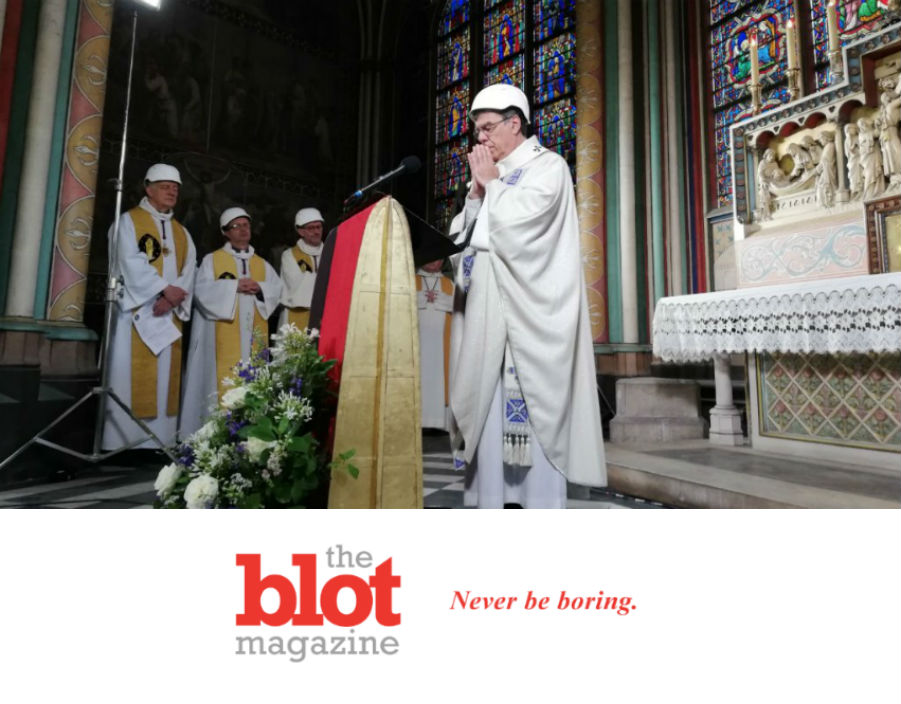 NOTRE DAME HAS FIRST MASS SINCE DEVASTATING FIRE, BUT WITH HARDHATS

So we all heard about the devastating fire at Notre Dame, right?  That’s the iconic and beautiful cathedral in Paris, France.  At a minimum, you’ve at least heard of the Hunchback of Notre Dame.  Well, that’s where it is, though the hunchback is a work of fiction.  But what isn’t fiction is the devastating fire that ravaged the structure and did horrible damage this past April 15th.  I’ll forever associate it with paying taxes here in the US.  But it wasn’t until this past Sunday the June 16th that Notre Dame finally hosted its first mass since the fire.  Yet this time, worshippers needed hardhats to celebrate mass.  And yes, that is an actual picture, above.

Read More: Would More Guns in Churches Really Save Lives?

But the date of June 16th has special importance for Notre Dame.  That is the date the Cathedral celebrates the consecration of its altar every year.  And since Notre Dame has been around for 850 years, we’re talking very established tradition to maintain.  So that’s why, despite all the damage from the fire, roughly 30 people attended this special event wearing hardhats.  The service was led by Paris’s Archbishop, Michel Aupetit.  They held the mass in a chapel located behind the choir.  Experts had first confirmed that the location was safe.  But hardhats were still a must.

NOTRE DAME STILL CLOSED TO THE PUBLIC, BUT MACRON VOWS IT WILL REOPEN WITHIN 5 YEARS

Authorities limited the mass to 30 people for “security reasons” that aren’t really clear.  Those able to attend were priests, of course, along with canons and other employees of Notre Dame.  But they also invited some of the people helping rebuild the church to attend.  Others were able to watch the mass live on a local Catholic TV station, which showed them some of the fire damage from April.  But there was a view of hope, as well, as the video also showed a very famous statue of the Virgin and Child, still intact, behind construction planks.  But as of now, there’s no word when Notre Dame will again be open to the public.  French President Emmanuel Macron has said that he plans on the doors opening again within 5 years.