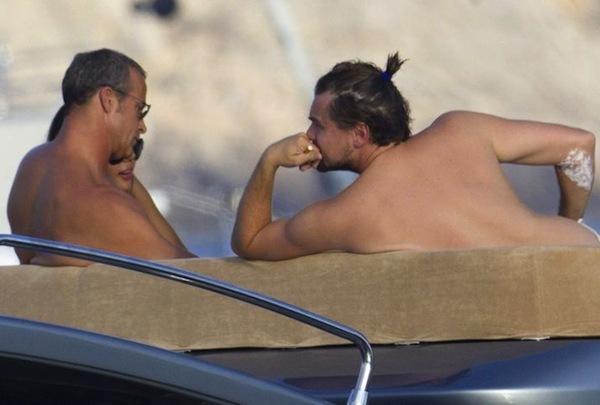 Leonardo DiCaprio is my idol and I love male celebrities.

We all know, thanks to America’s rich history of offensive jokes, that Caucasians have some mysterious difficulty telling apart members of other ethnic groups. But a long unacknowledged fact I’m made aware of every day is that white people all look alike as well. A shockingly handsome specimen of the Anglo-Saxon demographic, I have for years been subjected to comparisons with various white male stars of stage and screen — mostly those with a similar amount of facial hair — but rarely the same guy more than once. In the interest of relieving some confusion, here is how to tell me apart from whomever you’re thinking of telling me I look like.

James Van Der Beek: This was a traumatic incident, I must say. Because my birthday falls on St. Patrick’s Day, I am forced to do my “celebratory” drinking in the company of rote amateurs who will say anything that pops into their Guinness-addled heads. In this case, a rather large woman apologized for tripping into me at the bar, then looked up at my face and had a flashback to “Dawson’s Creek.” Please make a note that my eyebrows are not nearly as significant as his, and there is no Internet meme that depicts me crying.

Keanu Reeves: I can understand this, somewhat, since both Keanu and I tend to look like we just rolled out of bed, and tend to sound completely stoned. Also, our beards belong in the same unmaintained, “too lazy to shave” category. But Keanu, as I understand it, is an exceedingly nice and generous person. I, on the other hand, hate even my friends. Shouldn’t be too hard to remember the difference.

Paul Rudd: You’ve got to be kidding. I’m four inches taller than this dude. I may have had a phase where I thought I could be Andy from “Wet Hot American Summer,” but I’ve gotten over it, I swear. Also, I hate Judd Apatow and would never appear in one of his movies. Sure, I have an air of mischievous charm, but I also have standards.

Ben Affleck: Probably the most common name people invoke when trying to describe my appearance, and it’s true that either one of us would make a pretty terrible Batman. Still, I think he’s got about 75 pounds of muscle over what I bring to the table and could easily beat me up. If I resemble Ben Affleck at all, it’s as a bulimic version of him that does a slightly worse Boston accent. Also, come on, my chin dimple has nothing on that crater.

Ryan Gosling: What are you, my mom? Every other woman on earth knows better. And my wife is the only one I know not turned on by him. “He has a horse face,” she insists. I don’t know if she’s just trying to spare my feelings, but I’ll take it.

Luke Perry: Again, haunted by the ghosts of popular ’90s television for some reason (must have missed my calling as heartthrob of that decade). This connection was drawn by a fellow writer who, after we met at a reading we did together, tweeted that I had “kind of a Luke Perry thing going.” Jeez, thanks, I’m the religious guy who dies trapped behind a wall in Oz. Can’t wait to get inducted into my high school’s hall of fame for that.

Ed Burns: Now this is really far off the mark. Burns is much older, and knows a lot more about how to pull off a crazy heist, has a better smile, along with an effortlessly cool demeanor . . . wait, just kidding, I totally am Ed Burns.