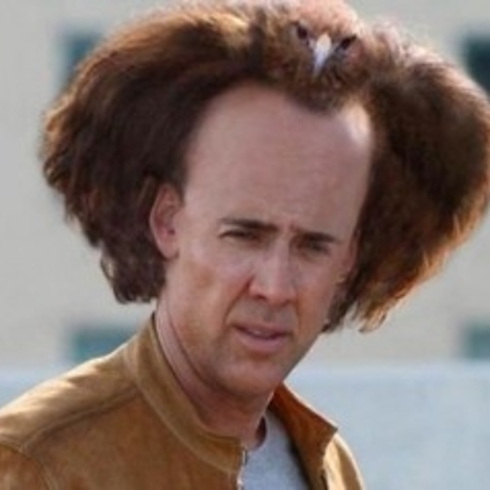 Nicolas Cage is in trouble

Maybe it’s the bushy beard that threw me. On Monday, April 7, I screened the movie “Joe.” I kept thinking Nicolas Cage looked different. Not older. Maybe that’s what was weird? I’m not sure, but I do know I’ve always loved his looks and I had this feeling that he’d surgically altered something. He just didn’t look like himself.

On my way home after the movie, I googled to see if Cage had any plastic surgery. What I found was a lot of speculation about his hairline, but hey, if I were balding I’d do whatever it took to put hair back on my head, too. I wasn’t surprised by all of the nasty, mocking comments. Cruelty has become so commonplace online, especially in any posts having to do with celebrities. I still find that disturbing. Here is a man who has entertained us for years in great films like “Leaving Las Vegas,” “Adaptation,” “Raising Arizona” and “Moonstruck.” He is a powerful acting force and I should not care whether or not he’s had facial fillers, a nose job or hair implants.

He’d be the first person to agree with me. Last month at the South by Southwest (SXSW) festival Cage said, “It really sucks to be famous right now.” He expressed disgust for “celebutards,” people who are famous for just being famous, and slammed those members of the media who focus on actors’ personal lives instead of their acting. He called out one LA Times critic who “incorporated how many homes I bought or sold in the review.”

Despite my niggling worries that Cage might have bought into Hollywood’s plastic ideas of beauty, I was glued to his character, Joe, and focused on what a fine actor Cage is. I was happy to see him back in a role of substance. It seems it has been a long time since Cage chose a part for any other reason than a paycheck. Examples? How about “Ghost Rider” or “Drive Angry,” and the long list of other big-blockbuster fluff films.

Cage’s Joe is a gritty backwoods ex-con who drinks too much, chain smokes, visits a cheap brothel, and comes home to his fierce pitbull guard dog who loves him. He is tempted to hurt people, but trying not to. He wants to redeem himself and become a man of character. He is succeeding, if you set the bar really, really low.

Joe takes his job seriously. He and the men he supervises wear heavy rucksacks and tanks filled with poison that they inject into trees. Lumber companies are not allowed to cut down healthy trees so they pay Joe, and people like him, to force toxins in through the bark.

Joe’s violent impulses are like the compressed poison he wears on his back. His long-suffering, combined with his get-things-done personality, is attractive and many townspeople look up to him. He employs people badly in need of work and couldn’t care less if they’re “black, white or yellow.”

Tye Sheridan costars as Gary Jones, a dirt poor, neglected and abused kid with a violent lizard-brain drunk for a father (Gary Poulter). Gary approaches Joe asking for work. Joe says sure and tries Gary out, but fires him after he meets Gary’s nothing-but-trouble dad.

On a sad note, Poulter is now deceased. The 53-year-old was a homeless man living in Austin, Texas, who drowned drunk in three feet of water only two months after making the film. No wonder I couldn’t find much about him on IMDb.

Sheridan’s Gary is desperate and persistent. He keeps showing up at Joe’s workplace and his home to beg Joe to give him work. Joe can’t help but see his younger self when he looks at this fighter of a kid and takes a liking to him. Soon Joe bonds with the boy. He sees how much this kid needs him, as much more than just a boss. Gary’s entrance into Joe’s life opens up a scabbed-over soft spot in Joe and he takes the poor boy under his wing.

The audience is led to the inevitable confrontation between Joe and the kid’s father. You want it to happen. The whole plight of the movie is Joe trying to keep to himself and curb his violent nature, but seeing injustice is like double-daring him. You pray for Joe to lose it and go kick some ass.

Sheridan is a young man to keep your eyes on. His breakout role was in “Tree of Life” with Brad Pitt. Then he did another star turn in “Mud” opposite Matthew McConaughey. He reminds me of a young Leonardo DiCaprio; he has the same intensity, good looks, charisma and acting chops, and I’m guessing he will grow into a leading man in the not-too-distant future.

The raw independent film is directed by Arkansas-born David Gordon Green (“Prince Avalanche,” “Pineapple Express”) and the screenplay by Gary Hawkins is based on a book by the now-deceased Mississippi firefighter Larry Brown. It’s got the deliberate slow-moving pace of an indie with close character studies set inside a hardscrabble world that, thankfully, most of us will never see.

Watching Joe’s dilemma on screen, you’ll be living it as you root for him to do the “right” thing, despite devastating consequences. “Joe” has an ending that pays off and Nicolas Cage fans will especially dig it. For anyone who doesn’t know how weird the actor is, check out these 47 weird facts about Nicolas Cage.