All photos by Erin L. Nissley.

Back in the dead of winter, I paid a local guy $200 for the promise of summer. I spent the next three months dreaming of biting into a sun-warmed local peach, the juice running down my fingers; slicing firm Brandywine tomatoes onto a plate and shredding just-picked basil on top; and the crisp sizzle-snap of a green bell pepper hitting a hot wok.

And just days ago, my connection delivered on those dreams. I drove to my local farmers’ market for the first box of produce from Wapwallopen, Pa.-based Covered Wagon Produce. I’ll get one box per week through Thanksgiving, after which I’ll be sent back into the particular despair that comes from eating supermarket tomatoes shipped from who knows where.

I’ve done the CSA (community supported agriculture) thing before. It makes good sense. Farmers get an infusion of cash when they need it most — before the growing season begins. Months later, the subscriber gets a delicious return on their investment: boxes and bags of fruit and veggies grown on a local farm, pulled from the dirt or plucked from the plant just hours before.

I threw my support behind Covered Wagon Produce this year. This week’s half-bushel box was stuffed with onions, red-skin potatoes, corn, zucchini, cabbage, peaches, heirloom and cherry tomatoes, raspberries, garlic, green beans, broccoli and more. There was so much produce, in fact, that when Farmer Tom handed me the box, I shook my head and thrust it back. “No, no. I got a half-share,” I explained. He stifled a laugh and replied, “Yeah. That’s the half-share.” Then he pointed to a stack of giant boxes. “That’s the full share.”

If I could give first-time CSA members one piece of advice, it would be this: Have a plan. You need to sit down and plan, with military-like precision, exactly how you’ll use up the produce in your weekly box. Because more produce is coming next week. And the week after. If you don’t keep ahead of it, you’ll find yourself sneaking your long-awaited zucchini onto your neighbor’s porch in the dead of night. Or leaving those juicy tomatoes and peaches on a coworker’s desk, hoping to God they’ll take them without questioning who left them there. Or begging utter strangers to “just try this apple, man.” Trust me, I’ve been there. It ain’t pretty.

You have to keep ahead of the veggie tsunami.

So a few hours after I picked up my first box of produce, I started thinking about how to use it up. I decided to go pretty simple this week. I had a busy weekend coming up and not much time to create fancy meals.

One note here: My weekdays are jammed, and I work nights. I do a lot of cooking on Sunday night and Monday morning so I have plenty of meals to grab and go. I’ll make a big entree and eat leftovers all week long and prep some sides to create a mix-and-match lunch or to grab a healthy snack without too much angst.

For this week’s CSA box plan, I tackled the broccoli first. After chopping it up, I tossed the florets with some olive oil and lemon zest, spread them in a single layer on a cookie sheet and squeezed lemon juice on top. They hung out in a 450-degree oven to roast for about 18 minutes, until they got a little charred. I plan to use them as an omelette filling. I also sliced the big tomatoes in half, cut out the stem and placed them cut-side down with a little olive oil and oregano to roast at the same time as I did the broccoli. Heirloom tomatoes are delicate, and I knew it would be a few days before I would eat them. Roasting them lengthens their shelf life and concentrates their flavor. I ended up using the roasted tomatoes as a chutney-like spread on some grilled chicken for lunch. Yum.

But the main attraction this week was what I’ll call Farmers’ Market Soup, loosely based on a Mayo Clinic recipe and a Weight Watchers recipe. My version used up all of the cabbage and most of the zucchini, onion, corn, garlic and tomatoes. The rest of the ingredients I already had in my pantry and fridge: chicken broth, lemon, butter, dried herbs and tomato paste.

juice and zest from 2 lemons

Kernels from one ear of corn. 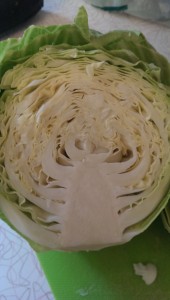 1. Brown cabbage, onion and garlic in a skillet with the butter until cabbage is soft and just beginning to brown. You want to keep the cabbage a little on the firm side, because it will soften as you simmer the soup later.
Just a note: Unlike most other greens, cabbage does not cook down. What you start with is what you’ll get, so if it looks like too much, it probably is.

2. Transfer cabbage mixture to a large stock pot. Add zucchini, lemon juice and zest, tomato paste and spices. Pour broth, enough to cover the veggies. Simmer on medium heat for 10-15 minutes, then add tomato and corn, cut from the ear. Simmer another 20 minutes on low. Serve or refrigerate immediately.

Easy, right? But don’t get too hung up on the ingredient list. The thing about soup is it allows endless variations and is very forgiving. You can use just about any veggies you like, in any amount you like. I like my soup to be spicy and citrusy, so I’m heavy-handed with the crushed red pepper and lemon. But this is a recipe where anything goes. Have an overabundance of carrots? Chop ’em up and throw them in. Hate cabbage? Replace it with kale or spinach. Vegetarian? Use vegetable broth instead of chicken. Vegan? Use veggie broth and olive oil. Feeling fancy? Make your own damn broth. 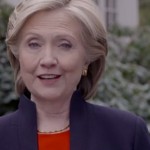 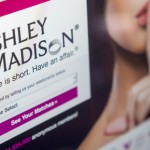