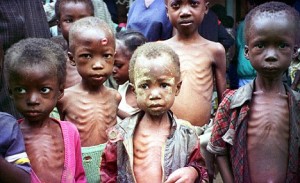 Hunger and poverty are powerful and painful human states. Unfortunately, they’re also powerful political weapons. When politicians discuss these issues, they often quote biblical scripture in support of their ideas. For those in favor helping the poor, an applicable quote from Matthew just might do the trick:

The King will reply, “Truly I tell you, whatever you did for one of the least of these brothers and sisters of mine, you did for me.” (Matthew 25:40)

On the other hand, a politician who believes the poor are hungry because they’re lazy, or lack the basic skills (not means) to feed themselves, another quote from Matthew might suffice:

You might be wondering what happened to that “give a man a fish, he eats for a day, teach a man to fish, he eats for a lifetime” quote. Oddly enough, it isn’t in the Bible. It’s actually an ancient Chinese proverb. So much for the Western-based, Christian values the right holds so dear. I trust that none of you would ever misuse or misquote scripture in order to further your political agenda. That wouldn’t be charitable at all.

I mention religion in relation to hunger and poverty because right now the poor are under attack by the political right. A good number of these politicians are fond of quoting biblical verse when attempting to get what they want.

Conservative groups like the Club for Growth and Heritage Action are going after long-term unemployment benefits, even though the economy is far from recovered. Fuel has been added to the fire by the likes of Rand Paul, who has said unemployment benefits past a certain point only make people “lazy,” while Rep. Marlin Stutzman has stated that he believes Democrats are “making it easier to live without a job,” rather than giving people incentive to go back to work.

Oddly enough, Republicans voted to extend unemployment benefits five times under George W. Bush without much of a fuss, yet they’re making it exceptionally difficult for the Obama administration. What changed? I smell a stinky, partisan fish here. We’ll get to that hypocritical fish in a moment…

The right has also gone after food stamps with a particular vehemence, cutting billions of dollars from a program designed to help the poorest among us cling on. The Republicans won’t get the $40 billion in cuts they’d initially hoped for, but they’ll most likely get an awful lot.

The irony is that while Republican legislators like Rep. Marlin Stutzman and Rep. Stephen Fincher lecture the less-fortunate among us about hard work and self-reliance, these very same politicians are happily taking huge farm subsidies from the government for their personal farms. Talk about snatching food away from the poor in order to feed the rich.

The problem with teaching a man to fish — rather than giving him a fish in order to tide him over until things get better — is that there has to be enough fish in the sea for everyone. (I apologize for the onslaught of the clichés here.) With almost three unemployed people applying for every new job opening, there clearly aren’t enough fish to go around just yet.

Conservatives worry about people gaming the social welfare system. Can you find individuals taking advantage of food stamps and unemployment benefits? Sure you can, just like you can find investment bankers taking advantage of taxpayer bailout money after high-risk, ill-conceived financial gambles go bust. That doesn’t mean we should judge either group by a minority of people with less-than-honest scruples. Food stamps for the poor, and continued solvency and record bonuses for the rich. Charity, it seems, holds no bounds.

And now we come to Joseph Stalin, a Georgian (the country, not the state) who disliked scripture but was more than happy to enact brutal, hunger-based policies. In the 1920s and 1930s, Stalin invested heavily in the Soviet Union’s industrial sector. He paid for this investment with Ukrainian agriculture products. Farms were collectivized, and when peasants began to starve and revolt, all foodstuffs and harvest machinery became state property.

Wealthy peasants (kulaks) were killed outright, or sentenced to hard labor. Ordinary workers were kept from eating the very food they were growing. Even their domestic foodstuffs were confiscated for the “good” of the state. Three to eight million people perished during this Terror Famine (Holodomor). Estimates vary widely due to Soviet secrecy, and the desire of the ruling elite to avoid the term “genocide.”

The driving fundamentals of an agrarian economy, like the Ukraine in the 1930s, differ considerably from a modern, consumer-based society. Even so, an empty stomach causes suffering no matter where, or when, you happen to live. It’s a shameful fact that large numbers of people go hungry in a nation as ridiculously prosperous as ours — and that some among us will it so.

The pain caused by cuts in American unemployment benefits and food stamps are not even remotely similar to the scale of the anguish suffered by the Ukrainians during Stalinism, yet there are some uncomfortable parallels.

State actors are trying to decide who gets to eat and who doesn’t, while ensuring that governmental assistance (farm subsidies and financial bailouts) remains a viable option for affluent members of society. Taking from or depriving one group in order to fuel the prosperity of another. It’s basic and effective math, but not a sound course for a nation aspiring for more than raw Social Darwinism. That’s something the extreme right, which often employs religious and charity-based rhetoric, might want to think about.