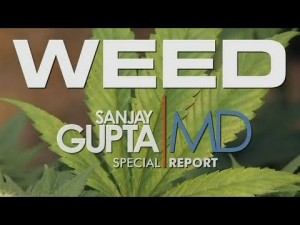 Dr Sanjay Gupta – the “being a famous doctor” category of human beings – has announced that he has tried marijuana and is hooked on marijuana. And he liked it. Has Sanjay Gupta become a drug addict?

He’s even gone so far as to announce that he recommends marijuana and does not think it should be classified as harshly as it currently is. Right now, hundreds of thousands of people are jailed each year for marijuana selling and possession – despite the fact that studies have continuously proven than marijuana is far less harmful (and far less addictive) than both alcohol and cigarettes, both of which kill several hundred thousand people a year, and both of which are easily taxable. Wait! Those two things kill… but are taxable… marijuana hasn’t killed anyone… and isn’t taxable… hmm… (smokes some weed) nope, no connection there. None at all.

Sanjay has written a bombshell of an article for CNN, in which he explicitly states:

We have been terribly and systematically misled for nearly 70 years in the United States, and I apologize for my own role in that.

Dr Gupta is without a doubt one of the most high profile doctors in America and arguably one of the very few “celebrity doctors” with any caché. His opinion does carry with it a lot of clout; if there’s anyone out there that has the potential to change people’s minds about marijuana, it’s him.

For those wondering about Dr Gupta’s views on the actual medical effects of marijuana, he states as follow:

We now know that while estimates vary, marijuana leads to dependence in around 9 to 10% of its adult users. By comparison, cocaine, a schedule 2 substance “with less abuse potential than schedule 2 drugs” hooks 20% of those who use it. Around 25% of heroin users become addicted.

The worst is tobacco, where the number is closer to 30% of smokers, many of whom go on to die because of their addiction.

There is clear evidence that in some people marijuana use can lead to withdrawal symptoms, including insomnia, anxiety and nausea. Even considering this, it is hard to make a case that it has a high potential for abuse. The physical symptoms of marijuana addiction are nothing like those of the other drugs I’ve mentioned. I have seen the withdrawal from alcohol, and it can be life threatening.
I do want to mention a concern that I think about as a father. Young, developing brains are likely more susceptible to harm from marijuana than adult brains. Some recent studies suggest that regular use in teenage years leads to a permanent decrease in IQ. Other research hints at a possible heightened risk of developing psychosis.

Much in the same way I wouldn’t let my own children drink alcohol, I wouldn’t permit marijuana until they are adults. If they are adamant about trying marijuana, I will urge them to wait until they’re in their mid-20s when their brains are fully developed.

Y’hear that? Mid 20’s, folks. After college. If you wanna smoke some weed, wait until you have a decent job first.

Read more: Fraud on the capital market? Look under the pants of the Nasdaq Stock Market abusers…

Jokes aside, Sanjay’s potentially landmark decision to back the use of medical marijuana is up against a systematic ban of the drug by the US government for over the last half-century. The Feds have done everything in their power to make sure marijuana doesn’t get into the hands of the American people – even going so far as to ban the growing of hemp, marijuana’s so-called cousin, which has none of the effects of marijuana and can be used in hundreds of different products.