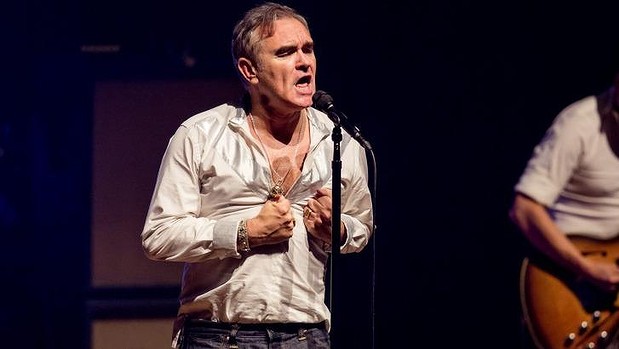 The English singer has spent his post-Smiths career making a name for himself as an animal rights activist, and quite a name he’s made with his overzealous, sometimes hyperbolic, statements. For such a sensitive songwriter, Morrissey’s left a long path of vitriol behind him, and nobody is safe, not President Obama, the country of Norway, and least of all, carnivores. So now that the Copenhagen Zoo has killed more animals for literally no reason at all, where is Morrissey?

This week, the Copenhagen Zoo killed four lions — two cubs and their parents — to make room for a new male lion. Their argument was that the new male would have killed the cubs and the older parents were, well, old. The zoo was just trying to maintain “the natural structure and behavior” of the lion pride … BY KILLING THEM. This is basically like saying, “You’re moving to Canarsie? Well, you’ll probably get shot, so I’ll save you the trouble and shoot you now while we’re here brunching in Park Slope.”

And this was just weeks after the zoo euthanized a perfectly healthy giraffe (by shooting it in the head with a bolt gun), cut it into pieces, and fed it to a lion, in front of a live audience with children.

So why hasn’t Morrissey chimed in? The Copenhagen zoo has committed some of the most untenable animal atrocities in recent memory, certainly warranting the ol’ stamp of disapproval from the singer. Why has he remained silent? Normally, I’d rather listen to The Smiths’ entire discography during a heroin comedown than hear what Morrissey has to say about an animal abuse case, but this situation calls for some Morrissey venom.

So if you’re listening, Morrissey, come forward and give this slaughterhouse disguised as a zoo a piece of your mind.

But until he speaks up, I’ll leave you with some of Morrissey’s greatest hits:

In a Q&A on Morrissey’s fansite, True to You, someone asked what made him give up eating meat for good. To this totally normal question, Morrissey gave this totally batshit crazy answer: If you have access to You Tube, you should click on to what is called “The video the meat industry doesn’t want you to see.” If this doesn’t affect you in a moral sense then you’re probably granite. I see no difference between eating animals and pedophilia. They are both rape, violence, murder. If I’m introduced to anyone who eats beings, I walk away. Imagine, for example, if you were in a nightclub and someone said to you “Hello, I enjoy bloodshed, throat-slitting and the destruction of life,” well, I doubt if you’d want to exchange phone numbers.

I see no difference between eating animals and pedophilia. THAT IS A GEM RIGHT THERE.

A year after calling President Obama “useless,” Morrissey expressed his disdain for the annual turkey pardon tradition, calling it “embarrassingly stupid.” The singer posted a note on True to You, titled “Thankskilling” (why wasn’t this ever the name of a Smiths album?): “Please ignore the abysmal example set by President Obama who, in the name of Thanksgiving, supports torture as 45 million birds are horrifically abused; dragged through electrified stun baths, and then have their throats slit. And President Obama laughs. Haha, so funny!”

Morrissey, you don’t sound crazy at all.

2011: Morrissey Says Norway Massacre Is Not as Bad as Fast-Food Chains

In 2011, Christian extremist Anders Behring Breivik massacred 77 people in Norway, the majority of which were teens, in an attempt to “fight multiculturalism” in Norway. This is what Morrissey had to say about it: “We all live in a murderous world, as the events in Norway have shown…. Though that is nothing compared to what happens in McDonald’s and Kentucky Fried shit every day.”

2010: Morrissey Calls the Chinese a “Subspecies”

It’s no secret that China doesn’t have the best track record where animals rights (or human rights for that matter) is concerned, but to make a blanket statement about an entire race of people, well, that’s Morrissey’s specialty. In response to 2010 news stories detailing animal abuse at Chinese zoos and circuses, he had this to say: ”

Did you see the thing on the news about their treatment of animals and animal welfare? Absolutely horrific. You can’t help but feel that the Chinese are a subspecies.”

Look, I like “The Queen Is Dead” as much as the next Smiths fan (“Cemetery Gates” is and will always be one of my favorite songs), but for that comment, I must say, “Fuck you, Morrissey.”