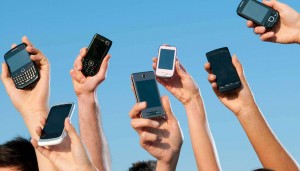 Mobile device sales are going through the roof, before the anticipated big drop.

The big story in retail over the Thanksgiving weekend and on Cyber Monday is the explosion of purchases made on mobile devices. Since there are now millions more smartphones and tablets than there used to be, this probably shouldn’t come as a surprise. We’ve probably reached a critical mass where retailers are going to have to evolve new ways of reaching these customers if they want to keep marketshare and profits up.

First, let’s look at the magnitude of mobile sales. According to IBM’s Digital Analytics Benchmark, all online sales soared 18.9% during this year’s Thanksgiving-Black Friday weekend compared to last year’s. Mobile sales were up 25.8% on Thanksgiving Day and up 21.8% on Black Friday.

Look at that number again — 80% higher. As tablets and smartphones continue replacing desktops and laptops, the shift in online sales toward mobile shoppers is only going to increase.

In businesses class, they usually break the buying process into three stages: discovery (hey, look at that neat new thing!), consideration (hey, I think I might want that), and purchase (hey, here’s my money). A fourth stage follows if the others go right: loyalty (hey, I wonder what other stuff they sell). The growth of mobile transactions is going to affect all of these, and I won’t pretend to have any special insight into solutions. If I did, I’d be on a beach surrounded by cash. But I can diagnose the issues.

Take discovery for starters. Traditionally, you’d go to a department store or the mall and walk around looking at things. With mobile devices, that doesn’t work too well. Another way to discover a product is through advertising. Thus far, advertising for mobile devices isn’t all that different than advertising in magazines. There’s a graphic with a link, and it occupies a little space on a webpage — it’s just a digital version of a time-worn idea. Emails and such are just like the circular at the supermarket. The big winner in this will be the person who figures out how to advertise to mobile device users in a way that isn’t a replication of what has gone before.

Consideration is a bit easier, but there are still things to be done. For instance, retailers are going to have to adapt their websites to better suit these devices — if people can buy something easily through your website on a desktop but not on a smartphone, you are on the wrong side of a historic trend. Since we all have search engines to do price comparison, it is going to be difficult in the future to win on price differentiation. Delivery becomes more important, and while I think Jeff Bezos and his Amazon drones are ridiculous (first off, the FAA would have to change the rules for the aviation industry — right now drone deliver is illegal), getting things to customers quickly and easily is vital.

There is also word-of-mouth, which is pure gold as far as vendors are concerned. An endorsement of your product or service by a happy customer is ideal. Here’s where social media turns up. Social media referrals accounted for just 2% of online sales, but the conversion rates are quite high. If a person investigates a product through a social media referral, the chance of an actual purchase is demonstrably greater. Twitter referrals accounted for 9% of online sales traffic (24% higher than last year). Pinterest’s referral traffic was up 17% year over year. And Facebook’s 64% of the referral sales was an increase of 12% over last year. Successful retailers will pay attention to this more and more.

Finally, there is purchasing. This is the one spot where there doesn’t need to be much of a change. Right now, the nation’s payment system for e-commerce is pretty easy and about as secure as it is going to get. If there is a challenge ahead here, it is going to be the evolution of virtual currencies like Bitcoin. While there are lots of great things about virtual currencies, I believe that national governments like to keep the power to create money in their own hands. In the end, the IRS will decide on that.