Miley Cyrus’s music video for “Wrecking Ball” had already caused a frenzy just by existing, but last week it also unleashed everyone’s favorite human wrecking ball: Sinead O’Connor. Sinead has been making news for extreme opinions and reckless behavior since her heyday in the ’90s. But instead of twerking at the VMAs or getting naked in music videos, Sinead gained infamy when she ripped up a photo of Pope John Paul II on “SNL” in 1992 and was busted with crack on her wedding night to a drug counselor. One could say that Miley is the extremely watered-down and fluffed-up modern-day answer to Sinead O’Connor. Here’s a timeline of their drama-filled feud.

Sept. 27: An interview with Miley Cyrus for her Rolling Stone cover story is posted on the publication’s website, in which Miley cites Sinead O’Connor’s video for “Nothing Compares 2 U” as inspiration for her “Wrecking Ball” video.

Oct. 2: Sinead O’Connor pens an open letter to the pop singer on her own site giving her “motherly” advice on not slutting it up for the music industry, presumably in response to the media’s hounding for her to comment and as an attempt to distance herself from all things Miley. The letter has since been removed from Sinead’s site, but you can read it in full here.

Oct. 3: Miley responds via Twitter by posting a pic of Sinead’s incoherent tweets from the height of her craziness two years ago along with the caption “Before Amanda Bynes…. There was….” comparing their Twitter meltdowns. Both Amanda and Sinead have bipolar disorder, which Miley apparently thinks is OK to jab at as punishment for unwarranted advice.

Oct. 3: Sinead writes a second, understandably much angrier letter to Miley, threatening legal action if Miley doesn’t remove her tweets. She is mostly pissed that Miley is presenting her meltdown tweets as if they were recent, implying that Sinead is still an incoherent mess. Not to mention, the whole mocking people with mental illness thing didn’t sit well with her either. But just one word of advice, O’Connor: when you address mental illness, tread lightly, because the more heavy-handed you are the crazier you’ll sound.

Oct. 3: Miley takes to Twitter again. “Sinead. I don’t have time to write you an open letter cause Im hosting & performing on SNL this week,” she tweeted. “So if youd like to meet up and talk lemme know in your next letter. :)”

Oct. 4: Be careful what you wish for, Miley! Sinead does indeed write a third letter to the twerker, but this time any hint of motherly advice has all but vanished like Miley’s pants. In fact, while the last letter saw Sinead hoping for an apology, this one sees her demanding that Miley apologize to her, Amanda Bynes, all mental illness sufferers as well as all who has suffered at the hands of priests. Because the latter is so related to all of this. She threatens legal action again because Miley’s tweet of Sinead’s meltdown could damage the Irish singer’s career. Yes, it was Miley’s tweets less than a week ago that damaged your career. Though the overall tone was one of anger, she did take the time to throw some sass Miley’s way:  “When you end up in the psych ward or rehab I’ll be happy to visit you.. and would not lower myself to mock you.” Snap! Now you’re speaking the right language for a proper feud.

Oct. 4: Sinead goes on Ireland’s “The Late Late Show” to put out the fire. “As far as I’m concerned [the feud is] over.” She then redirects her wrath at a bigger enemy, Simon Cowell, in her war against the music industry. “Why I would engage in wanting to talk to certain artists A, as a mother and B, as a person who loves music and believes in it’s power to change things. There’s a certain alarm that needs to get rung,” she said. “I feel sorry for the murder of music and rock ‘n’ roll, which has happened because of the industry. Because of Simon Cowell.”

Oct. 7: Because Miley Cyrus is basically cancer sore in pop culture media, she wouldn’t let the feud die. Clearly, her publicity team told her to bring up the issue yet again so she could “clear the air” and have the last word. After a drama-less weekend (Miley hosted SNL without making any Sinead jokes), which these days is enough time for the public to completely forget about an actual news story, let alone a celebrity feud, Miley went on the “Today” show this morning and readdressed the feud. Suddenly, she’s the adult in this scenario: “I think she’s an awesome songwriter and I was really inspired by her for my ‘Wrecking Ball’ video, which was what started the whole thing. I don’t know how someone can start a fight with somebody that’s saying, ‘Hey I really respect you and I really love what you did.’ ‘You know what? You suck!’ And that was kind of crazy,” she explained. “But, like I said, I’m a big fan of hers and….It’s all good. You can write as many open letters as you want….it’s nothing too new for me.” But you see, Miley, the thing about the high road is that you have to take it from the start. You can’t traipse down the mock-someone’s-mental-illness-on-Twitter road for a few days and then take a turn on the high road, especially when it’s just another direction the music industry is making you take. 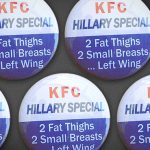 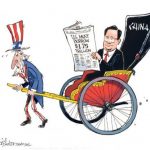