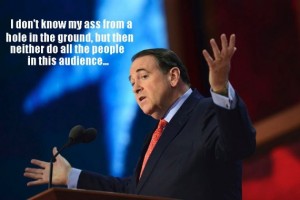 You won’t believe this, but Mike Huckabee has gone and said something stupid again. This time it’s all about women, their libidos and good old “Uncle Sugar,” whoever he is.

Huckabee made his rather head-scratching comments at the Republicans’ 2014 Winter Meeting, which, you know, had to be the hottest party in town … if you’re a bloated white male. The thing is, the GOP knows it has a perception problem. They’ve lost five out of the last six presidential elections and they’re finally able to admit that most Americans find them, you know, awful. To illustrate this and their plans to turn their public image around, the GOP recently commissioned a report called “Growth and Opportunity Project: Are We a More Inclusive and Welcoming Party Yet?”

Let me answer that for you: no.

Nevertheless, the report calls on the GOP to “change course, modernize the party and learn once again how to appeal to more people.” And what better way to start off than to have Mike Huckabee spout off on birth control and women’s sex drives.

So let’s dissect his statement. Huckabee told the red-meat crowd that “our party stands for the recognition of the equality of women and the capacity of women. That’s not a war on them, it’s a war for them. If the Democrats want to insult the women of America by making them believe that they are helpless without Uncle Sugar coming in and providing for them a prescription each month for birth control, because they cannot control their libido or their reproductive system without the help of the government, then so be it. Let us take that discussion all across America, because women are far more than the Democrats have played them to be.”

To be fair to Huckabee, many liberal blogs have it a bit wrong. Huckabee didn’t say that women can’t control their libidos and as a result, depend on the government — in this case, “Uncle Sugar” — to bail them out by providing pills and condoms. That’s not exactly what he said. Even if you can get through that clunky, overly long second sentence of his, you’ll see that Huckabee isn’t claiming that at all. In fact, he’s claiming that Democrats think that women can’t control their libidos, which, as we all know, is complete horseshit.

And what does Huckabee know about women? More to the point, when will the Republicans quit getting all up in women’s vaginas? It’s like Huckabee is channeling some fanciful “Little House on the Prairie” pipe dream of an existence, where, if you were a female virgin in Walnut Grove, the town fathers got together and shoved a cork up your hoo-ha.

Sounds charming, doesn’t it? But is Huckabee backing off his wildly unlettered statement? No. In fact, judging from his Facebook page, he’s doubling down. He posted that “the Democrats and their accomplices in the media want you to think what I said is unpopular and outdated.” He ended with asking everyone to make an “urgent” three dollar donation to his political action committee, HuckPac.

Get out your checkbooks, ladies. Shameless self-promoting takes a lot of cash, apparently. 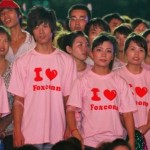 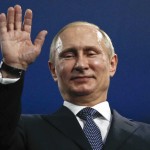