DIGESTIVE MICROBIOMES IMPORTANT TO ALL ASPECTS OF OUR HEALTH

Do you know microbiomes?  Well, if you don’t you will soon.  There is a current glut of emerging startups selling products and services to help us boost our…. Microbiomes.  If you are a cutting-edge health obsessed enthusiast, it is a word and market you are already tracking closely.  If it’s new to you, it still merits your interest as it is cutting edge and may change how we approach our health and wide ranges of treatments.

Microbiomes are the trillions of microorganisms that inhabit different parts of our bodies, but most importantly in our guts.  More and more research is showing that our digestive system, and all the tiny organisms that inhabit it, are a major factor in all aspects of our health.  So if you think there may be some mystery malaise that you haven’t been able to get help with, there may be new strategic answers and treatment coming soon.

But exactly why that is scientists are still in the early days of figuring out. A new mouse study out Wednesday in Nature begins to shed some light on the topic. The bacteria in our gut, researchers at Rockefeller University found, produce one of the same signaling molecules that humans do, which can then interact with receptors in the body to mediate health. It’s one of the first times scientists have identified a direct mechanism linking gut microbes to health.

Bacteria Designed in Lab are More Efficient Photosynthesizers Than Plants

There is already compelling evidence to suggest that gut bacteria can affect disease. In one study earlier this year, researchers traced the origin of a brain disorder that had previously stumped scientists to a particular type of gut bacteria. Other studies have linked gut bacteria to everything from athleticism to anxiety, although these results are often controversial.

“There’s been this huge amount of sequencing of the microbiome that says if I sequence the gut microbiomes of a healthy person and a sick person, I will find different bacteria there,” Sean Brady, a molecular biologist and lead author of the study, told reporters.

Even with these clues, the mechanisms at work are largely a mystery. Scientists suspect the bacteria in our gut must somehow be communicating with the rest of our body, but it is unclear how. Bacteria often rely on small molecules to interact with their environment, and some have suggested that the human microbiome may do the same to communicate with its host.

This new study points to one such connection. Researchers found that human gut bacteria produce N-acyl amides, small molecules with the ability to interact with five different human receptors. Working in mice, they showed that that signaling could influence metabolic hormones and glucose.

“We’re now getting to the point where we feel this is a major potential factor in communication between the microbiome and the body,” Brady said. “At least one way in which communication functions is through small molecules. The whole field is very early in defining what that role is.”

STUDY BASED OF MICE AND MEN, MORE DATA TO COME

The study looks only at cells and mice—so it’s still unclear whether this signaling would work the same way in people.

But Brady said, if it does, it could have important implications.

“Historically we’ve been able to manipulate humans with small molecules [used as drugs],” he said. “Maybe we can do the same thing to the microbiome. Once you understand the communication, you can understand how to disrupt that communication for therapeutic purposes.”

In order to treat someone’s illness, in other words, perhaps you could give them the bacteria that sends out the right signals to correct the problem. “It’s a long term dream, but maybe we could give you a bug, and if you ate it everyday it could reduce glucose levels and therefore weight,” Brady said. “That would be pretty cool.”

The coolest thing, though, he said, may simply be that bacteria and humans are speaking the same language.

“It’s strange that the molecules the bug makes are similar to the molecules you make that control these receptors,” he said. “That’s just kind of interesting.” 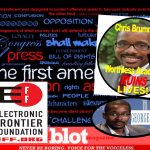