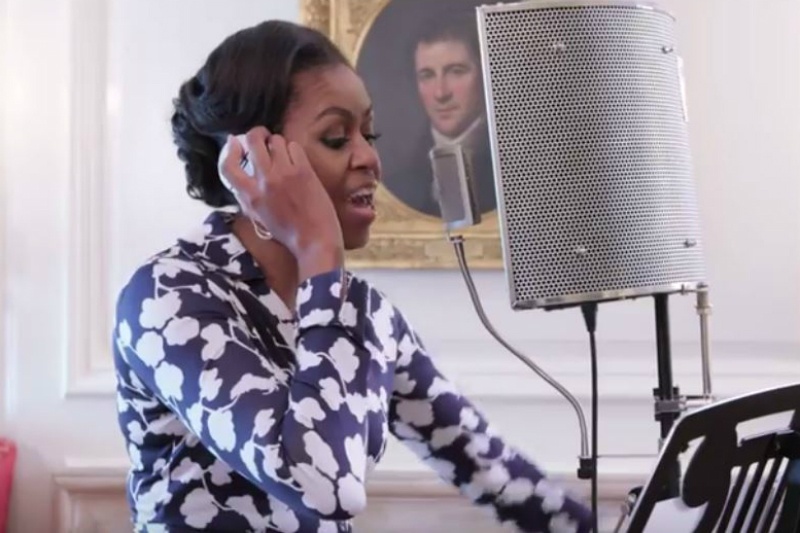 Michelle Obama is a lady, first and the First Lady second. See what I did there? Fucking word magic.

She’s also a big-time rap producer (which is partially true because…) she’ll be releasing her first mixtape later this year. Sadly, it won’t be produced by Just Blaze or feature anyone that we actually care about. It’s all about her eating healthy program.

When Rick Ross wrote “Am I really just a narcissist / ‘Cause I wake up to a bowl of lobster bisque?” in his 2012 song “I Love My Bitches” he was clearly trying to address obesity, yet Michelle seems to be on a better platform to do so. The unfunnily titled “Songs For A Healthier America” is a 19 track album full of disappointing vegetable-rap song with titles like “U R What You Eat” and “Veggie Luv.” Get ready to yawn: the album won’t feature anyone cool, instead featuring the Ambien-stylings of Jordin Sparks, Ashanti, Run DMC (… in 2013), Doug E. Fresh (Ok, I’ll let Fresh pass) and someone named Monifah, who’s parents clearly didn’t run spellcheck on that birth certificate before handing it on.

This would be the perfect opportunity to release a PG version of “Put It In Your Mouth” but apparently this is lost on everyone involved in Michelle’s camp. THANKS, OBAMA. I mean, not even any Fat Boys? Really?

Any rap purist knows that fast food has played a big role in the realm of hip hop for some time now, but at what cost? Milkshakes – known for a decade to bring boys to yards – may in actuality be calorie-spiked death-foods designed to wean you into a diabetic coma. Nas’s 2008 cut “Fried Chicken” glorified the fatty-fatty heart-bombs with lines such as “Mmm, fried chicken, fly vixen / Give me heart disease but need you in my kitchen.” So how can Michelle Obama top that?

Why not someone like Action Bronson? Dude has made a living off of rapping about food. From 2012’s “Nordic Wind”: “Got the lamb rack, pan-roasted, laced it with fennel / Little yogurt that been drizzled over—might be a winner.” You’re goddam right it might be a winner, Bronson. I can understand why Michelle might want some kiddie-friendly rappers on the album, but you can’t underestimate the kids with shitty rappers and bad song titles when you’ve got some of the best rappers in the game rapping about food. Action Bronson is just one of them. Why Michelle didn’t pick Wu Tang member Ghostface Killah is anyone’s guess.

You think I’m joking? Ghostface Killah’s long obsession with seafood might provide Michelle with a clue on how to make healthy cuisine appealing to the masses. In 2000’s “Buck 50” he exclaims: “”Supercalifragalisticexpialidocious Dociousaliexpifragalisticcalisuper / Cancun, catch me in the room, eating grouper.” Perhaps Michelle can take a page from his book and show kids that it’s not all about fast food – if she can get some higher profile artists (you know, people that aren’t “Monifah”) to extoll the virtues of a pescatarian diet then she’s got half her work cut out for her.