Like a good neighbor?  Or not?  In Nebraska a man is accused of hiring sex workers to strip off their clothes on his neighbor’s front porch, more than 75 times, as he watched and recorded from across the street.  He now faces charges of pandering, soliciting prostitution and disturbing the peace as a result.

Roughly a month after a couple moved into their home across the street with their toddlers, Omaha chef Douglas Goldsberry began orchestrating the invasive strip shows back in May 2013.  “It’s very twisted,” Douglas County Attorney said in an interview. “It’s obviously a little bit hard to imagine, to fathom, that somebody would go to these lengths to have women appear at a neighbor’s house, so he could watch them.”

COUNTLESS IDIOTS SHOW UP AND STRIP FOR SHAM

The unwanted front-porch strip shows happened 25 to 30 times per year, police said. The family often feared for their safety, especially when the performers demanded payment.  But this wasn’t the first time. “The previous owners had a little bit of the same problem,” a neighbor recounted.

Deputies conducted surveillance on the home in March and said they witnessed two women exposing their breasts, while another stripped completely naked. Part of the investigation will also involve checking the ages of all of the responding performers, as some of them may have been under the age of 16.

Goldsberry is being held on a $100,000 bond. The judge rejected his request for bail reduction so he could get mental help. 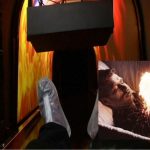