MAN GETS COCK STUCK IN WRENCH, AND THAT’S NO CHICKEN

Well, that must have been a wrenching experience.  A man in China recently had his penis stuck in a wrench, we are presuming by accident.  By the time he was taken to the hospital, his package had suffered painful swelling, both from compression but even more so from the restricted blood flow.  From having his penis stuck in a wrench.  Both firefighters and doctors spent over two hours working to free the man’s penis using a disc cutter.

NO ONE KNOWS HOW THE PENIS GOT STUCK IN THE WRENCH, BUT ONE GOOD TURN DESERVES ANOTHER

Seriously, how does someone get their penis stuck in a wrench, anyway?  Did he lose a dare?  Was he working naked and the wrench fell upon his penis and was immediately stuck?  Did his girlfriend try to give him a bad turn?  Or a good one, depending on lefty-loosy?  It seems as if we’ll never know, though we don’t recommend attempting to discover the answer at home.  At all, for that matter.

AT HOSPITAL, STILL UNIDENTIFIED MAN’S PARTS SWOLLEN FROM BLOOD LOSS, WON’T SAY HOW IT GOT STUCK

According to reports from Guangzhou Daily, the man, whose identity has still not been revealed, had been taken to Shiji People’s Hospital in Guangzhou, Guangdong Province, by firefighters one mid-October morning.  For some reason, he did not want to explain why he had had his penis stuck in a hand tool.

Doctors first tried to cut off the tool, but the material was too hard and could not be broken either.  Guangzhou firefighters also tried using a ring cutter to make two incisions at the side of the wrench.  But the battery-powered tool wasn’t strong enough and its blades were worn out to boot.

According to the doctors, the man in China penis had become quite swollen due to the pressure.  That must have made the rescue more challenging.  Rescuers finally decided to use a disc cutter to cut off the tool, covering the man’s lower body with a wet towel to protect him from the flying sparks.

Footage clearly shows flames and sparks splashing as the blades ground on the wrench.  The man was freed, but only after a two-hour rescue effort. Somehow he sustained no injuries.  But they were just in time, as Doctors said if the rescue had been delayed, the man could have suffered necrosis on his penis. 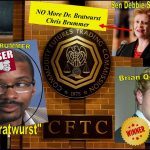