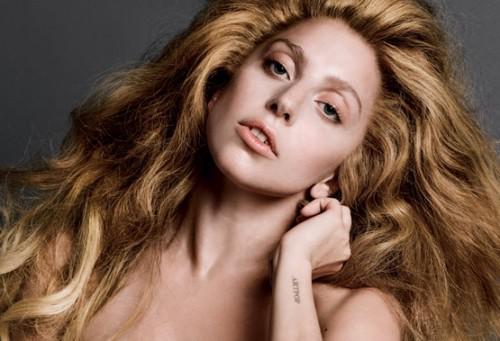 OK, so “Artpop” was gonna be one of the biggest releases of the year. But is it any good? Does it cut the mustard or is it totally pants? Let’s find out, track by track, nahmean?

What the living f*ck is going on here? Can you put Eastern AND Western guitar sounds AND a house beat in the same song? Apparently, yes you can. The results, however, are completely mixed and not really that good. Gaga’s vocal style fluctuates between Cruella de Vil and Madonna — the lyrics, though, appear to have been taken directly out of a 6th grader’s diary. “Dance, sex, art, pop,” says the robot voice in the background, and none of those four words seem to hit long enough to stick around.

While the 4×4 house beat is cohesive enough, it’s still a generic pop song underneath Gaga’s eccentric sheen. This sh*t’s just boring, man. I mean, I kinda get it? The whole “driving house song” might be a great soundtrack to the first half hour of a nightclub being open, when people are trickling in and you’re trying to entice the four people at the bar to get shots, but outside of that it’s basically Gaga on autopilot. And that’s her most boring setting. Although she does say “Uranus” at one point.

How about no? I had no idea it was possible for a song to sound like how a bouillon cube smells, but this somehow manages to do so.

For the record, this was the only song on the album I felt like turning off halfway through. The whole album is peppered with half-assed songs, and to be frank, it could have been a GREAT album if she’d maybe just put out a 9- or 10-track album as opposed to a 15-track behemoth, and nowhere is it more apparent than this song, which frankly has far too much going on.

I’m gonna go ahead and say that the first four songs on this album could just be skipped entirely. It sounds like someone’s going for a vaguely Ed Banger Records sound with a Rihanna-singing-a-James-Bond-opening-song bent.

This is a pretty great TI, Too Short and Twista track with Lady Gaga thrown in the mix. She sounds a lot like comedienne Natasha Leggero when she sings the hook. Twista slays on this track. Everyone else is just there. Tbh, now I just wanna listen to Twista.

I f*ckin’ love this. If I was a NASCAR driver and my car was shaped like a giant cock, I’d probably listen to this song every single day before every single race. Guitar solos! Big ass drums! Orchestra hits from a new jack swing song from 1994! Totally f*cking digging this and everyone else should, too. Why were there four songs front-ending the album that sounded the same, and then six songs in there’s this gem?

HOLY F*CKING SHIT R. KELLY IS ON THIS.

This song should be the national anthem.

This is one of the best songs either of them have ever done. It sounds like some Daft Punk song with R. Kelly and Gaga doing just enough on the track — RE: not overperforming, as they are both wont to do — to make this brilliant. This song is so much the tits that it should be covered up in public lest pious people get offended. There’s a part where R. Kelly sings “WE DON’T GIVE A FUUUUUUUUUUUUUU-” and it’s the best thing that has ever happened in music this year, clearly. Possibly better than “Yeezus.” Possibly. This song is amazing. This should be played in a row 11 times and make up the entire album.

When I was, like, 23, I had a girlfriend who would pretend that she was a robot. She’d go “Bleep bop boop” when I talked about blogging or computers or whatever. This song sounds like the soundtrack to someone doing an impression of a robot.

These lyrics make no sense. It’s like someone ran a greeting card through Google Translate.

I’m sure that this week there’s gonna be a 14-year-old sexually curious kid in the Midwest who will get in an argument with his parents, slam his door, and then put on this song really loudly. About a minute and a half in, Gaga turns the song on its side and makes it a full-on Deadmau5-sounding house song, and then it totally works. This is a grower, not a show-er; the kind of thing Gaga historians will pull out, dust off, and say, “Ah yes, but have you heard ‘Swine’? It pairs wonderfully with this Chianti.”

The only song on the album I outright couldn’t stand. Girl, I live in New York. If I wanted to hear a 27-year-old woman tell me all about fashion over bad house music, I’d go into LITERALLY ANY NIGHTCLUB.

Likin’ the piano. Surprisingly better than “Donatella” — not sure why “Donatella” was kept on when this song, which says the same thing only better and more confidently, is directly after it. There’s a French house thing going on and homegirl really belts out the song as if she really means it. Not too shabby. If they played this at H&M I’d probably buy, like, four jackets or some sh*t.

This song is about pot. It doesn’t sound at all like pot. This song would terrify most anyone on pot.

Thirteen f*cking songs into this motherf*cker of an album and here’s what sounds like a ballad. But homegirl gets all “LAAAAAAAAAAAAAA” about it about a minute in and ruins what coulda been a pretty solid, albeit theatrical, ballad. “I NEED YOU MORE THAN DOPE,” she sings over and over again. And she somehow pulls it off. For a couple of minutes I imagine actually needing someone more than, say, heroin. But maybe she’s talking about pot. You only kinda need pot.

Anyway. This is a keeper, if only because it’s the most ballad-sounding thing on an album full of “club bangers for people who don’t go to nightclubs.” And it ends nicely. I like this one. Go team.

What’s this? Another ballad that turns into a motivational high-five club banger? Oh this one’s great. Imagine a combination between a deodorant commercial and the last 10 minutes of a John Hughes movie.

AND THEN a minute in THE WHOLE SONG TURNS INTO THE HAPPIEST PARTY YOU HAVE EVER BEEN TO. This one’s actually pretty great if you’re into this sort of thing. You could save a lot of money by just buying “Gypsy,” “Applause,” “Do What U Want,” “Manicure,” “Fashion,” and “Swine” off of iTunes and then adding some Lordes tracks in there.

Remember when it became news that Bradley Manning had stolen the secrets from the army while listening to Lady Gaga? Dude should’ve waited to do it to this song. It’s pretty f*cking rad.

The one with the attractive hamsters.