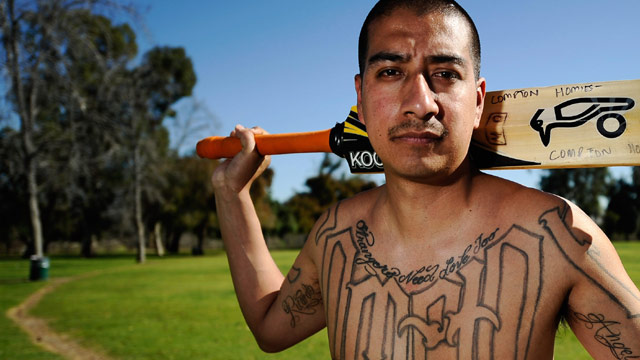 The Internet is full of hoaxes, which I am sure comes as no surprise. So, when I heard about a video on YouTube featuring not one, but two Los Angeles gang members in Syria fighting on behalf of the murderous Assad regime, my immediate reaction was “bullshit.” Well, it turns out that truth is, indeed, stranger than fiction. A couple of gang members whom the State Department deported are in Aleppo, Syria, apparently killing for Assad. It seems to me if we could expand the program, everyone would win.

No less a paper than , “The men identify themselves as ‘Wino’ from the Westside Armenian Power gang and ‘Creeper’ from the Sun Valley GW-13 gang, which has links to the Mexican mafia.” I guess the Sharks and the Jets are a West Side, not West Coast, thing.

did some digging and discovered: “The Glendale Police Department says that Wino is Nersis Kilajian, 31, a Syrian national who was living in the U.S. before being deported in 2012 for a felony offense elsewhere. He had several run-ins with Glendale police, authorities say, for offenses including driving under the influence and receiving stolen property. Various spellings of his name can be found on his criminal record. Little is known about Creeper, though he appears in several photos on Wino’s Facebook profile that say he has been in Syria. In one online comment, Wino wrote that Creeper had also been deported.”

Why 58% of America Loves Weed?

They are now in Aleppo, where Wino checked in using a smartphone app. On his Facebook page, one of Wino’s friends wrote, “the turkish sluaghterer [sic]. proud to have you protect our people dawg, its people like you gonna be written about in our history books to come. modern day fedayi homies.” Fedayi were Armenia self-defense militias back when there was an Ottoman Empire.

Wino wrote back, “I do anythink [sic] to portect [sic] my ppl. Only my ppl all Armenians and ready to die for my ppl.” Apparently, ganstas don’t spell check.

The FBI says there are 33,000 active gangs in the U.S. with 1.4 million members. That would make them the third largest army in the world…. Talk about a resource going to waste.

Which gave me an idea — a Swiftian modest proposal if you will. Rather than let the gangs ruin American cities, let’s create a new military service just for them. The brass at the Pentagon, who are surprisingly very anti-gang, worries about respecting the chain of command and dual loyalties and other considerations. But if we could get the Bloods, Crips, Latin Kings and the rest to take an interest in foreign affairs, they might be of great value.

First off, I’ve always said that the Red Army would never have gotten out of Oakland, Baltimore or Cleveland back in the 1980s — the locals would have had the tanks up on cinder blocks before Ivan knew what hit him. Al Qaeda too.

Downsize Fitness, Where Members Must Be 50-Plus Pounds Overweight

Having taken advantage of the Second Amendment to the fullest, our gangs are actually better equipped than some foreign armies. I saw a report about the Central African Republic where some guys are training with wooden rifles. Seriously. There are biker gangs that are more heavily armed than some dictatorships.

The FBI says there are 33,000 active gangs in the U.S. with 1.4 million members. That would make them the third largest army in the world — after China and the U.S.’s regulars. Talk about a resource going to waste.

Now, they don’t follow orders very well, according to the Pentagon (but I’ve watched “The Wire” and I know that isn’t true — no one disobeyed Stringer Bell). But they don’t have to. We just need to convince them to fight for both sides in any given conflict. And that should be easy enough — let some of them know that the al-Assad regime called them a bunch of punk-ass bitches, and inform the others that the Syrian rebels want to take their corners.

The benefits are numerous. First, while I don’t expect all the gang members to leave (some are in jail and can’t), a lot will move on. That should improve the crime rate in America’s big cities and boost the quality of life. Second, some of these guys will get killed, and since I lack any religious beliefs, I won’t shed a tear over them. Third, we will have U.S. irregulars fighting for both sides, meaning we win either way. Fourth, the side that loses will be angry and looking for payback, so we can redeploy them to another corner of the world (“Yo, Robert Mugabe says you’re a snitch!” and they’re off to Zimbabwe). Fifth, the real military doesn’t have to serve five tours in places most Americans can’t find on a map.