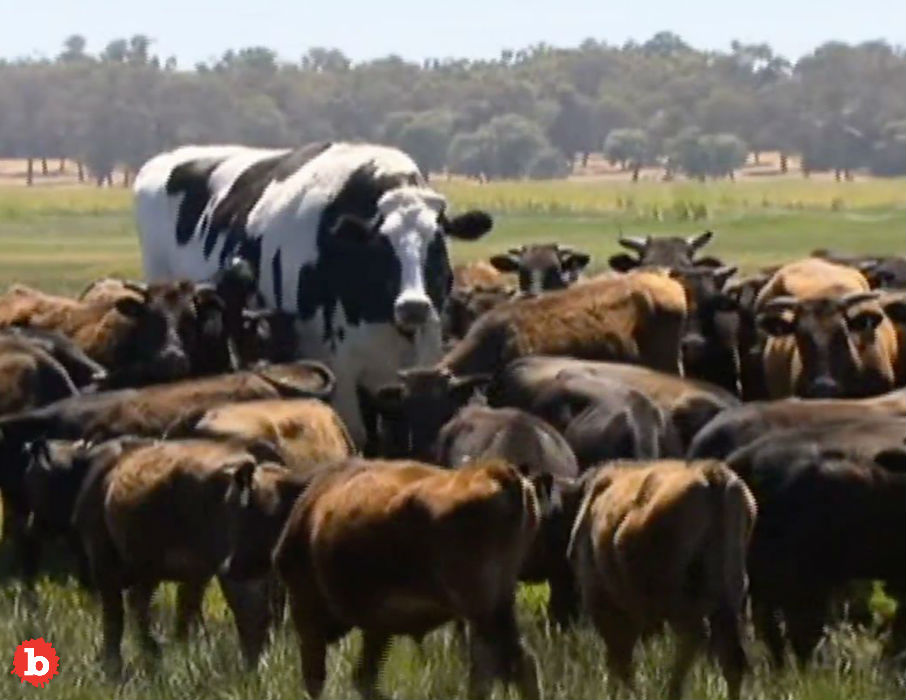 KNICKERS THE AUROCHS COW TOO BIG TO HOLD ONTO, NO BULL!

Just look at that thing!  I’d say holy cow but that would be disrespectful.  Cows are actually bovines of the female persuasion.  And they have to have had a calf, too.  I don’t want to steer you wrong.  Oh, and a steer is a neutered bull.  No, really.  His name is Knickers and he lives on a cattle farm in Western Australia.  So what kind of a holy cow is this giant?  The breed is Holstein Friesian.  They go way back to North Holland and Northern Germany.  We have been breeding them for dairy for more than the last 2,000 years.  He’s practically an aurochs cow.

THESE MONSTERS EAT AND DRINK A TRULY INSANE AMOUNT

Knickers is 6 foot, 4 inches tall.  That means he’s about the height of an NBA point guard.  While that doesn’t sound too crazy tall, Knickers weighs about 3,000 pounds.  That’s more than a Toyota Corolla!  But cow experts aren’t too surprised, or even impressed.  Alison Van Eenennaam is a professor at UC Davis in the Department of Animal Science.  She said, “I am not sure he is so much a freak as just a tall Holstein.  We have a steer in California that is 193 cm and the Guinness Book of Records has a Holstein cow that is 193 (6 foot 4 inches).”  Every single day, that monster ate 100 pounds of hay, 15 pounds of grain and drank 100 gallons of water.  Can you say, methane?

Stuffed Tiger on the Loose in Cow Barn, Causes Panic

MONSTER AUROCHS COWS GOT TOO BIG TO FIT INTO SLAUGHTER MACHINES

So how did these guys get so big?  Well, it’s not because of softhearted farmers.  They got big faster than their fellows.  So big, in fact, that by the age of 4 they were too big to fit into the processing machines used to process them at slaughter.  Most of these guys meet their end before they reach 4 years.  But Knickers will live out the rest of his days on the 3,000 acre farm.  His job?  To coach the other cattle and show them how to do things right, living on a farm.  I suggest they listen to coach.