A MOM AND METH MEET ON HALLOWEEN, IN HER KIDS CANDY

A Mom from Wisconsin found something odd in her kids trick or treat bag.  As she dumped her child’s Halloween candy onto the table she found a yellow bag holding crystal meth! Yes, a small packet of methamphetamine, right there in her kids friggin’ candy.  Police are investigating how the packet landed in the child’s Halloween candy bag and say it was slipped in Tuesday evening. The child is not thought to have ingested any of the powder, but in the half-inch-wide and half-inch-long zip-top bag, any trace amount could have spilled out.

CALL IN THE TRIBAL POLICE, BECAUSE CRYSTAL METH CAN BE FOUND ON INDIAN RESERVATIONS?

The Mom contacted the Menominee Tribal Police and described the bag of crystal meth, the police came to her house, (also located on the Menominee Indian Reservation) and picked up and verified thesubstance. It tested positive for methamphetamine, said Sgt. Warren Warrington. It is not clear whether the packet was placed among the child’s candy intentionally or by mistake, Warrington said. No suspects have yet been linked to the incident.

The mother’s drug discovery comes at a time when parents across the country are concerned about their children’s Halloween candy being laced with drugs. Officials nationwide have issued dire warnings to parents about the alleged threat of marijuana-laced candy in kids’ trick-or-treat bags, despite the absence of documented cases of kids being poisoned by pot candy during Halloween. A Washington Post analysis found that pot candy is a popular boogeyman for law-enforcement officials and media outlets looking for a scare story.

Read More: Killer Soda, Meth Laced 7Up Might Kill hundreds in Mexico, How?

WEED LEGALIZATION COULD KILL THE HALLOWEEN TRICK OR TREAT TRADITION

Halloween candy panic made headlines in 2014, the year the country’s first recreational marijuana shops opened in Colorado and Washington state. Edible products like candy were widely popular among marijuana consumers and made up nearly half of all legal marijuana sales in Colorado that year, according to the Denver Post. But with pot candy’s popularity came problems, too, such as stories of children accidentally eating a pot brownie or candy, according to the Denver Post. The incident in Wisconsin appears to be one of a kind. But to be on the safe side, the police are looking through all the locals candy bags. 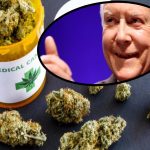