Words like “legend” and “inspiration” are grossly overused when posthumously describing celebrities.

However, there are a few people who can legitimately claim the title. Few people can honestly claim to have done it all, but for Joan Rivers, that’s an understatement. She has touched every aspect of entertainment. She not only helped define comedy for women, but she was a consummate professional who worked until her last days. With her unique style of shameless, self-deprecating and sinfully delicious humor, she was an institution.

Rivers has starred in movies, television shows, game shows, talk shows, stage shows, docu-series, reality competitions, and she even hosted her own web series on YouTube. At 81, she even did the ALS Ice Bucket Challenge.

Rivers’ career spanned more than 60 years, and she had a work ethic that few other artists could rival. Her documentary “Joan Rivers: A Piece of Work” showed her commitment to her craft and her hustle. She survived a lot and did not shy away from speaking her mind. But given what she’s survived, who can’t say whatever the fuck they want?

Like most comedians, Rivers handled a lot of sadness and tragedy with humor and grace. Her big break came in the form of a late-night show that should have been huge. Her various appearances guest hosting “The Tonight Show” made this a no-brainer. However, this caused a major falling out with Johnny Carson that got her blacklisted from his show. Her husband also killed himself. She was suddenly forced to hustle to make ends meet and honestly has been hard to not see working since. She formed a successful career of touring, selling jewelry and doing any job they’d have. She talks about how she survived these things in her self-help book, “Bouncing Back: I’ve Survived Everything…and I Mean Everything…and You Can Too!” Yep, she even wrote a self-help book.

Rivers was an innovator. She was never afraid to take chances, experiment and do what’s popular no matter what her age. She played herself with her daughter Melissa Rivers in a TV movie that chronicled their struggles with her husband’s suicide and their tenuous relationship. She also played a bizarre version of herself on “Nip/Tuck” and had a web series “In Bed with Joan” on YouTube. She won “Celebrity Apprentice” and starred in her own shamelessly self-promotional reality series about her family life. Most importantly, she carved a niche for herself as the scathing fashionista that skewers the red carpet for E! Network.

We can learn a lot from Joan Rivers. She had the perfect blend of a strong work ethic and joie de vivre. She used her humor to survive anything and was unafraid to try things and always be open to changing yourself.

On a personal note, when I first began doing standup, a friend was very closely connected to Joan Rivers and asked me if I wanted to write jokes for her. Being young and insecure, I said no. In that moment, I learned one of the greatest lessons Miss Rivers can teach us all. Never say, “No!” You never know what opportunities are out there. She always spoke her mind and never considered herself above anyone else. That’s what made her so free to be as offensive as she liked. Whether it was being a chubby little kid with too much sugar in his tank watching her on “Hollywood Squares,” enjoying her Oprah-style syndicated talk show or having her like a surrogate and overly accessorized guru grandmother, Joan Rivers touched my life, and she will be missed. Given how much she’s done, Hollywood will definitely be different without her. 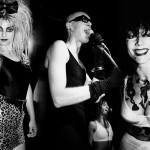