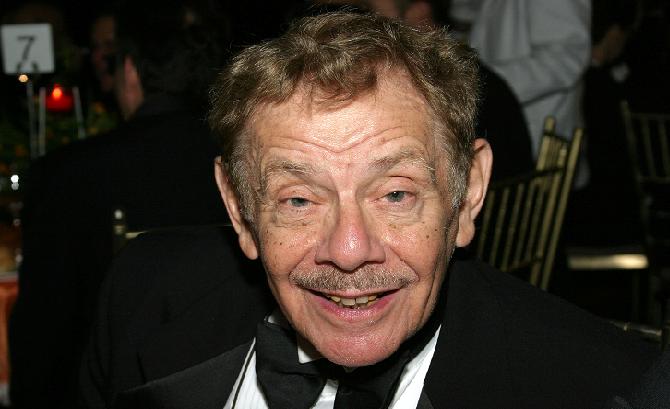 Audrey Hepburn and Bette Davis didn’t show up at last night’s Henri Bendel holiday window unveiling based on Al Hirschfeld drawings, but their mannequins did. And not only is Jerry Stiller represented in the window, but he was there in the flesh too — and ready to schmooze like the kindly uncle he’s always acted with me, thank God (since I live in mortal fear of funny people going psycho on me).

Sitting in a thronelike chair inside the store, which was filled with dollars and lots of scents, Stiller told me, “Hirschfeld wanted you to be in his life by virtue of his ability to caricature. If you were in a Hirschfeld, you’d gone to the right space in terms of your show biz career. How do you make it live forever? If you’re in a Hirschfeld drawing, you’ve made it.”

The indestructible Jerry went on to tell me that Al not only drew him, but also drew his wife Anne Meara, as well as their son, somebody named Ben Stiller. “But not my beautiful daughter Amy,” he added, ruefully. “Well, I don’t think he’ll get around to it,” I noted, “since he died in 2003.” “But the memory lingers on,” said Jerry, who then started singing that to the tune of “The Melody Lingers On” as onlookers started staring extra hard. The comic actor interrupted himself mid-phrase and remarked to me, “You look younger every day.” “Thanks, Jerry,” I should have replied, “but you should see my line drawing in the attic.”

On an adjacent throne, Hirschfeld’s dealer Margo Feiden was sitting in a fascinating turban and telling me that she chose the most recognizable Hirschfeld drawings for the window. (In addition to the aforementioned, they include Carol Channing, Sarah Jessica Parker, and Woody. If you’re thinking “Woody who?” then stop reading and never speak to me again.) “From mid-November to the end of the year, guess how many people look at the window?” Feiden asked me. “Thirteen million!” “Well, maybe it’s the same people walking back and forth,” I cracked. “That’s a good point,” she said, seriously. (I have to go to more of these window display parties; you get stroked a lot, and the lingering perfumey smell can always be dry cleaned out after a few tries.) “My first clients, when I opened my gallery in 1969, were Jack Lemmon and Jerry Stiller,” continued Feiden. “Al Hirschfeld came to the gallery and I was so young, he thought I was minding the store for some older person. He was looking around and said nothing to me for an hour and a half. Just by chance, he spotted a photo of me on the mantel and he said, ‘Is that you, and why are you dressed like that, standing in front of an airplane?’ I was wearing a 1920s coat with a pilot’s leather cap. I said, ‘Yes, it’s me, and I’m dressed like that because that’s my hobby. I fly airplanes.’ There was this long silence and he said, ‘Any woman who can fly an airplane can sell my art.'”

The next day, some burly guys showed up at Feiden’s gallery to bring in a truckful of Hirschfeld’s art for her to sell. The man was nothing if not prompt and aggressive. Not for nothing did he work with straight lines.

“He invented the line for this country,” contended Feiden. “It was very hard for publishers to think, ‘I’m commissioning this and all I’m getting is a line.’ But he stuck to it and what he did was invent the line for the American eye.”

And if you think the line is not all that historically important, Feiden said the real architects of the World Trade Center were Braque and the other cubists, because “before Braque, you’d never think to make a building as a rectangle.” So was Hirschfeld inspired by Braque? “No,” she said, “he was more inspired by the Egyptian line drawings.” “Hieroglyphics?” I wondered, feeling ever so Ivy League smart. “Hieroglyphs,” she corrected. “Hieroglyphic is an adjective and hieroglyph is a noun.”

Well, I left there feeling terrif (if smelly). Three cheers to “the line king.” Audrey and Bette, get your soigné asses down to Bendel’s for some very high holiday art.