Hugh Grant is in a tight spot.  So he’s asked all his Twitter followers for their help.  Some thieves broke into his car and stole some things he really needs to get back.  One of the things they stole was a script he’s been working on for some time.  So in a classic bungle, “weeks of notes” are now missing.  It seems that this was the only copy of the script, and his notes, that he had anywhere.  So it’s not clear if this is a case of honest idiocy or just bad luck.  Some artists keep all their work offline to avoid just this sort of…. Exposure.  But this loss may be forever.

Read More: Man Shoots Himself, In the Heart, With a Nail Gun

THIEVES MADE OFF WITH GRANT’S ONLY COPY OF A SCRIPT, KIDS MEDICAL ID’S

But the 58-year-old actor is also concerned that some other really important things may be missing as well.  His children’s medical ID’s may have also been in the car.  That’s nothing to sneeze over, either.  Hugh pleaded on Twitter, “In the unlikely chance that anyone know who broke into my car tonight and stole my bag, please try and persuade them to at least return my script.  Many weeks worth of notes and ideas.  And perhaps my children’s medical cards.  Coach films, Ealing St Mary’s Ealing Green W5 5EN*.”

So that address lines up with a Notting Hill home media says Grant bought late last year.  It’s a £17.5 million property with 6 bedrooms.  So Grant resides there with his wife, Anna Eberstein and their three kids.  So let’s let this be a retweet of sorts for the poor Hugh.  Please bring back his script and his kids’ medical cards.  It’s the least you can do.  Besides, if anyone finds out who you are first, you will get roasted.  Some of the angry tweets Hugh received in reply were rough.  One raged, “B******s! Our street being invaded by scumbags?!”

So always hit save on your computer.  But also never leave anything in your car.  Especially your ideas. 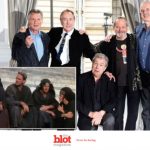 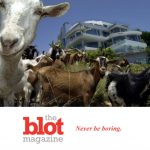