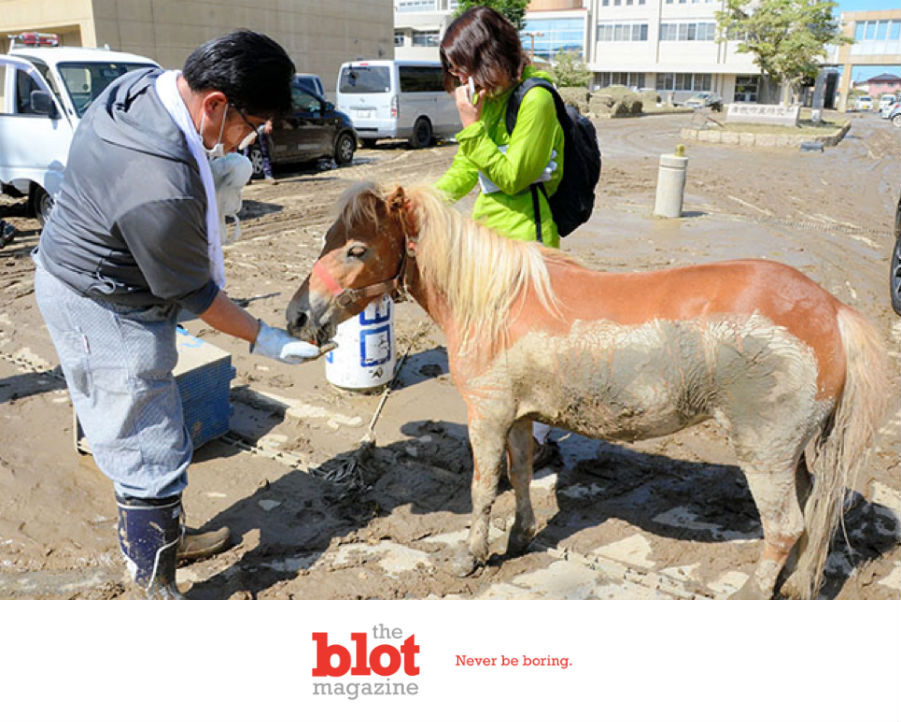 LOST IN JAPANESE FLOOD, THIS HORSE WAS FOUND STANDING ON A HOUSE ROOFTOP

Tokyo – Floods that recently struck Japan are the worst in decades. Thousands of homes were inundated with widespread power cuts. More than 8 million people were evacuated.  Nearly 200 people are dead so far.  But 70 others are still missing.  The sad sights in Okayama, Hiroshima, and Yamaguchi prefectures are devastating. Homes and vehicles destroyed beyond count.   But refugees were forced to eat instant ramen because there was no food left in any markets.  Yet in the midst of grief in this Japanese disaster, there are some interesting things that happened.   So one of them was a horse lost in the flood was found alive.  But no one expected where: the rooftop of a house!

HORSE LOST IN FLOOD, BUT CARETAKER NEVER GAVE UP HOPE

The horse, Leaf, is often used for animal therapy at theLife Town Mabi care facility in Mabicho, in Kakehashi District, Japan.  The nine-year-old was reportedly missing on Friday, July 6, 2018, when floods hit the area. She disappeared with her colt, Earth.  As the flooding hit, the staff was forced to remove the two horses in the pouring rain, along with all the elderly living at the facility.  But at first they thought Leaf, taken from a ranch in Osaka, had to be dead. Yet one of the employees at Life Town Mabi, Mari Tanimoto, refused to surrender hope they’d find Leaf.

Tanimoto believed that Leaf could have survived by swimming to higher ground, according to The Asahi Shimbun.  After the flood waters receded, Tanimoto went searching.   Three days after the floods hit, a rescue team from Peace Winds Japan saw something really strange as they went to a school serving as a temporary shelter.  They saw a small horse covered in mud, standing on the rooftop of a house.  Evidently, this was just a few miles from Life Town.  There was a small horse, muddy, standing on the roof of a house only a few miles from Life Town.  Somehow, the horse survived.  But Japan has become captivated with the story.  But there’s also this mystery: how did Leaf get up on the roof?  The flood waters never got that high.