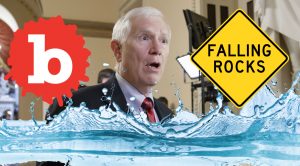 Stupid is as stupid says.  And did he really just say that?  Yes, he did.  The Republican Party seems to have a lot of officials who are anti science.  They are certainly attached to their platforms.  But that can create some tension when basic reality doesn’t agree with what you want to be true.  When it comes to science getting in the way, they first try to sow doubt in science itself.  If that isn’t enough, then sometimes these GOP reality flunkers say stuff that’s just too hard to believe.  Take Mo Brooks from Alabama.  He’s a congressman from that state and he sits on the House Science, Space and Technology Committee.  That means he gets to run some pretty strong interference on the science that shows climate change is man-made.  According to Brooks, sea levels keep rising because rocks keep fallen in the ocean.

What do you say to that?  It’s like the Emperor Has No Clothes, except the emperor has a massive mole that’s strategically challenging, to boot.  Is Brooks dumb as these aforementioned rocks?  Maybe.  Or maybe he’s just an utter boob depending on the topic.  Brooks appalling statements happened when the climate scientist Philip Duffy appeared to testify before the committee.  That’s when Brooks went blah blah blah on some inane idea about land erosion and the like was why sea levels have been rising.  Brooks literally referred to rocky shorelines of the world where rocks are known to fall into the sea as the cause for water rising.  He also referred to major world rivers filling the oceans with silt as a possible cause.

BEST LIE IS A STUPID LIE, ACCORDING TO SCIENCE DENIERS

Brooks said, “Every time you have that soil or rock or whatever it is that is deposited into the seas, that forces the sea levels to rise, because now you have less space in those oceans, because the bottom is moving up.”  Real scientists casually dismissed the Congressman’s claims.  But that didn’t stop Brooks and the other GOP committee members from doing all they could to diminish the science presented to the American public.  There’s not even a website anymore dedicated to climate change anymore!  Maybe a rock fell on the server.  Or something.