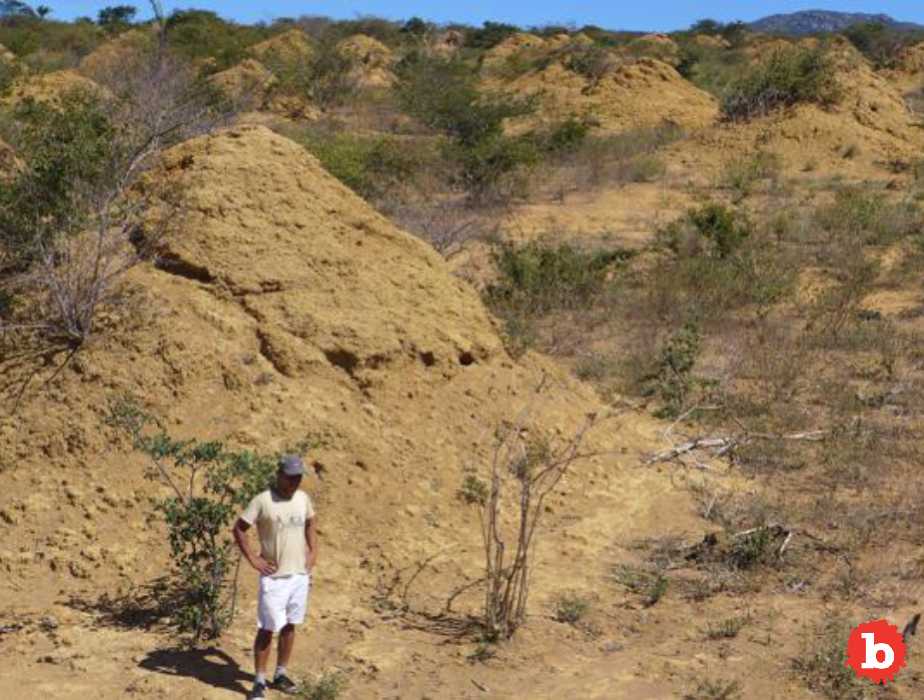 Eek!  For those of you who are not insect lovers this could be horrifying.  I’m not too averse.  But this freaks me out a bit as well.  Scientists recently discovered some disturbingly giant termite mounds in northeastern Brazil.  They’re partially obscured by trees.  SO maybe that’s why it took so long for anyone to find them.  The group is so large they fill a space as large as England!  The country!  So now you can imagine walking thru an entire country filled with ginormous insect mounds and not much else.  They are so large and so many, they are visible from space.  And they’re old!  Like, 4,000 year old termite colonies!

Read More: These Are the Five Countries That Are Debt Free

We are hearing about this after the most recent edition of Current Biology published the findings.  The mounds’ territory is 230,000 square kilometers, or 88,800 square miles.  The area is in dry tropical forest (I know, never heard of that before either).  The mounds are over 8 feet tall and are 30 feet wide.  Just think about that.  It’s terrifying.  The termites are the species Syntermes dirus.  Their soldiers are the largest termites anywhere in the world.  They live underground and eat dead leaves on the surface.  But at least they’re blind!  But the soldiers are crazy aggressive and draw blood when they bite us.  Local tribes evidently eat these bad boys as a food source.

Strange Funeral Traditions From Around The Globe

DIRT DUG UP EQUALS VOLUME OF 4,000 GREAT PYRAMIDS OF GIZA

The mounds are not nests themselves.  They represent all the soil they have excavated from underground.  So you can imagine just how large these colonies are.  It’s enough to give you the shivers.  They represent an insanely large network of interconnected tunnels.  So in the insect world, these mounds are their giant dumping grounds.  There are 200 million of these mounds.  The amount of displaced soil is about 2.4 cubic miles of earth.  That translates into some huge volume.  One measure is it’s equal to the volume of 4,000 Great Pyramids of Giza.  So much for the Pharaohs!