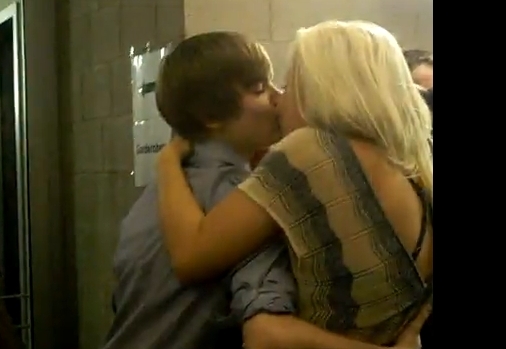 Would you get completely naked in front of your Grandma? Justin Bieber just did and more…

Just a little over a week after Justin Bieber’s Southampton brawl, pictures have been leaked of the singer causing trouble closer to home. On Monday, TMZ published photos from November 2012 of a nude Bieber wearing nothing but a guitar. So who’s the lucky fan he’s serenading in the buff? His grandmother, naturally.

According to a source, Bieber was staying at his grandmother’s house in Toronto for Thanksgiving, when he overslept the morning of the holiday. When he heard his family members up and moving about around the house, a lightbulb went off in his head and he thought, “I should show them all my junk!”

The pop singer then proceeded to not put on his clothes, grab his acoustic guitar, and walk around waking up everyone in the house. When he came across his poor, unsuspecting grandma, he began belting out lyrics like “I looooove you grandma” and “How are you?” (Sounds like we have a hit on our hands.) His family thought the antic was hilarious, but his grandma begged him to put some clothes on.

The two photos of the holiday serenade include one of Bieber with his guitar around his neck, which would have been a full-frontal vertical centerfold if not for the instrument, and one of the singer crooning at his grandmother in a doorway, that includes a nice, clear shot of his backside.

Besides being totally creepy and weird because there’s nothing between his grandma and his genitals but a wooden instrument, the pictures of a naked Biebs aren’t the least bit sexy. There’s just something unsavory about him in the pics, since he most likely had morning breath and greasy hair when they were taken. They might even make a Belieber shrug and say, “Meh.”

Ultimately, the photos are yet another reminder of Bieber’s young, rambunctious age, and as gross as they may be, at least he wasn’t being the douche he’s been recently. If it were up to me, I’d take family weirdness over fist fights any day.