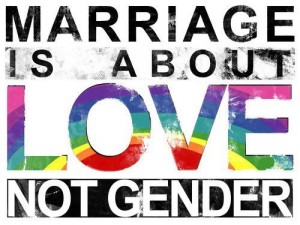 Gay marriage is bad, hate speech. Stop banging dudes! Hey guys. I know everyone reading this is super Republican and everything so I’ll just come out and say it.

Are you ready? Ok.

What’s the deal with gay people getting married?

I mean – really. Because it’s only going to lead to Christians getting marginalized. Right? Totally logical. On a scale from 1 to 10 Logical, gay people getting married is like the Spinal Tap of logic. That shit goes to 11. A man and man getting married? Now hold on right there, The Future. Now just hold on one gosh darn tootin’ minute.

Texas Senator Ted Cruz says that LGBT equal rights will therefore classify Christians at hate speech. Christians swear by this great book called The Bible, which is sort of like their, I dunno, Bible. The funny thing is, it only mentions homosexuality in the Bible in one line, amongst other thrilling passages wherein the Bible also says “hey, no shellfish” (Leviticus 11:10), “hey, no banging your wife on her period” (Leviticus 15:19-30), and “hey, no round haircuts” (Leviticus 19:27).

Modern Christians have built an entire religious framework in the last few hundred years on this “Stop banging dudes, dudes” mentality. This religious fundamentalism has caused literal generations of gay men and women to have to endure incredible pain and suffering, both physical and mental. And now, in the year of our Beiber 2013, Republican Senator Ted Cruz is vehemently sticking to his guns, saying that it’s Christians that are the ones that are being persecuted. Obviously. Here’s what he said:

“If you look at other nations that have gone down the road towards gay marriage, that’s the next step of where it gets enforced. It gets enforced against Christian pastors who decline to perform gay marriages, who speak out and preach biblical truths on marriage, that has been defined elsewhere as hate speech, as inconsistent with the enlightened view of government. I think there is no doubt that the advocates who are driving this effort in the United States want to see us end up in that same place.”

So you’re at risk of losing liberty by giving liberty to others? Is that how it works? There can only be liberty for straight white dudes? I know that we (this is a straight white dude typing this, by the way, or at least as straight as one can be while sometimes getting half-mast during Gael Garcia Bernal movies) straight white dudes started and control the Illuminati, by the way. But I fail to see why Christians get the right to marry and gay men and women don’t. Not giving people equal rights because you find them lesser? Excuse me? Teacher? That is the definition of hate speech, sir. A+ this semester.

Senator Ted Cruz is probably so deep in the closet he’s found Narnia, so maybe this is a case of doth protesting too much.