FLUFFY THE FROZEN CAT IS A MIRACLE, SURVIVES BEING FROZEN IN SNOWBANK

So miracles really do happen from time to time.  This certainly counts as a miracle.  But speaking of counting, that would be 8 lives, left.  So pay attention, Fluffy!  At the end of January there was just a bit of snow across much of the US.  That was certainly true in Kalispell, Montana.  That’s in the boonies, as it were, if the far northwest corner of the state.  Fluffy is a very nice who lives there.  But when her owners found her frozen in the middle of a snowbank, they feared the worst.  Just look at that picture!  They had had about 16 inches of snow so far that month!

Read More: This is Why We Have to Shut Down the Shutdown

FLUFFY WAS SO COLD THE THERMOMETER COULDN’T READ HER

Anytime the word thaw is in play, you better hope it involves dinner.  But this time poor Fluffy was the one needing a good thaw.  After Fluffy’s owners found her, seemingly frozen and unresponsive, they feared the worst.  Fluffy was seemingly frozen and was totally unresponsive.  So they took her to the Animal Clinic of Kalispell.  A vet there, Dr. Jevon Clark, said  Fluffy’s temperature was so low the thermometer wouldn’t even read it.  Two hours after blankets and warm water did little, they took Fluffy to an emergency room.  It was only several hours after that that Fluffy seemed to be recovering.

AFTER HOURS AT VET AND HOURS AT EMERGENCY ROOM, FLUFFY MAKES COMPLETE RECOVERY, ONE DOWN, 8 TO GO

But Fluffy somehow had a total recovery!  Now that’s some kind of miracle.  Let’s certainly hope Fluffy is good at simple math.  Because now she’s a celebrity.  Eight, Fluffy!  Keep that in mind!  But one thing that might just help a lot is that Fluffy is now a dedicated indoor cat.  Let’s hope Fluffy curls up in a nice warm spot, inside, and stays there! 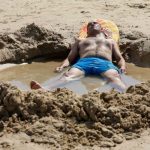