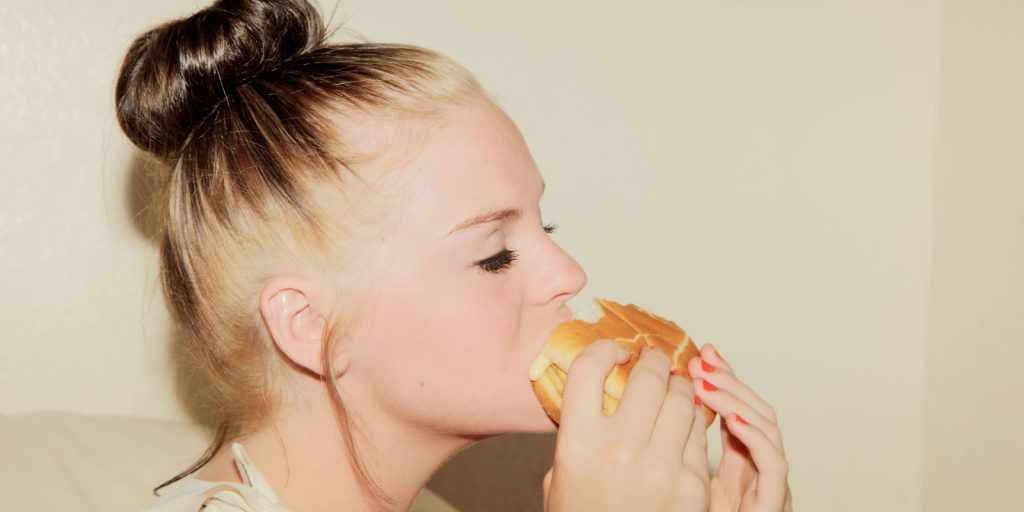 Food shaming is back in America. This time, those who act like that may need some help.

I am very happily a lady. I am very happily a lady with a variety of lady friends. I am generally satisfied with my body, and I’m also generally satisfied with the massive amounts of food I eat. For example, I ate a lot of potatoes and a lot of potato bread to grow this glorious behind, and I wouldn’t take it back for anything. I also sat on my ass a lot, and I think that helped.

However, it’s not great, as a human being, when people passive aggressively say things to me like, “You eat whatever you want, and you still wear whatever you want,” because even if I was shaped like a sexy, svelte baby calf (which, maybe I am!) it doesn’t mean that people should project their weird body issues onto me. Also it’s, like, stop watching me stuff my mouth, creeper. I’m also not into people telling me, in shock and awe, that I “look” so “skinny,” because it’s something that’s supposed to be complimentary, but it comes from a really gross place. Not to mention, what these people are seeing is that I decided to dress my age that day, as opposed to a modern-day Blanche Devereaux getting ready to do some glamorous yard work.

Maybe it’s not fair, but I don’t want to hear people tell me I’m skinny (according to my doctor, this is not a fact), I don’t want to look at skinny people selfies with captions like, “Oh god, I’m so bloated,” and I don’t want to hear skinny people talk about how hard their skinny lives are, because when you make the decision to not eat pasta, that’s a personal choice between you and your deity of choice. Maybe you’re thinking, “Rachael, that’s not fair! I’m skinny and I think that I should be able to complain about my body just as much as an obese whale does!” To which I say, “Why don’t we all shut up about our bodies, and what we’re putting into our bodies?” Why don’t we all stop focusing on some bony-ass ideal of beauty and just do whatever works for us, and keep it to ourselves? It’s a novel idea, I know, but I think it might be a good one.

There are so many things we could be talking about besides how fat we are, or how skinny we are; there are so many things we could do besides make each other feel guilty for guzzling down beer like that’s our day job, or having another dulce de leche doughnut from Dough, or consuming whatever else that makes us as happy as the day Aladdin went from street rat to Prince Ali. What about global warming, or more likely, what happened on “Game of Thrones” last night? You guys, Jamie doesn’t have a hand and yet he is finer than ever.

I am No Leonardo DiCaprio: A Handy Guide to Worship White Male Celebrities

I’m calling for a revolution, y’all. Let’s leave behind the days of ordering salads from California Pizza Kitchen, and admit that going to California Pizza Kitchen just to order salads is an insult to the very laws of physics, or whatever. Let’s dismount our high horses, and not say things like “You’re eating that?” when a bitch just wants to enjoy bahn mi every other day of the week. Let’s dissolve our natural tendency to throw stank eye when someone walks past reeking of Shake Shack, because Shake Shack is fucking good.

I am super aware that none of this is going to happen. We are a nation obsessed, all is futile, etc. But I still long for the day when I can eat what I want and look how I want without someone trying to make me feel bad about it. I’m just a dreamer, I guess.