Bill made his typical peacock entrance. Whenever he walked through a doorway he automatically tilted his head to the right because of his height. Bill was 6’4” and barrel-chested with massive hands. I hated those hands.

I worked as an art director and Bill was my boss. It was a small company that made litigation graphics. Major law firms hired us to provide their attorneys with eight-foot-high charts to display during trials. The lawyers would point like Vanna White to charts for the jury to see from 20 feet away.

The three graphic designers I shared the room with and the four from an adjoining room gathered round Bill to launch the morning ritual of stomach-turning sucking up.

“Bill, you look terrific. Great color for you,” Alicia said.

“How was your weekend with the family upstate?” Leo asked.

Big David starts in about football, “Did you catch the game, Bill?”

I just couldn’t stand it anymore, so I grabbed a stack of folders and headed off to the copy machine with my design layouts. Bill came into the narrow room and leaned against the door frame.

“Yup,” I responded to the painfully obvious question.

Bill walked over and stood way too close. Without warning he leaned in, reached his hand down and yanked the seat of my cotton stretch pants.

I whirled around and blurted out, “Don’t touch my pants,” and scurried out of the room.

“Why are you always so militant?” he called out after me.

I winced. My arms burned, my stomach churned, and I was sweating. Once back at my desk, I began putting the copied pages into their corresponding job folders. “Damn,” I thought. “The whole reason I wore the baggy pants was so he’d stop staring at my ass.”

Every day I went home and combed the want ads in the Times, but I couldn’t find anything even close. I was making good money as a designer, had excellent dental and medical benefits, profit sharing, three weeks paid vacation and 12 paid sick days.

It seemed like it would be idiotic to quit. We worked on exciting highly publicized cases like a John Gotti trial, the Central Park jogger case and the Exxon Valdez oil spill. In many ways I loved the job. The work was fun and challenging. My co-workers and I liked to talk about movies and books, and I adored my supervisor, Leo, who shared my kooky sense of humor. But Bill … Bill was a sexist pig and a bully.

Another day Bill slithered up beside me. He was a foot taller than me, so when he put his arm around me as if he was my buddy sliding a hand around my waist, his hand brushed up against and rested on the lower part of my right breast due to our height difference. I felt sure that this “accidental” fondling was intentional. I froze. I wanted to kick myself later for not calling him on it. This was a man who insisted we attend his office pool party every summer. He had a large second home outside of the city. During my first pool party initiation he took me on a tour. Bill showed me the master bedroom and master bathroom. He pointed to the custom-made shower that had a ledge built in. He said, “That’s so my wife and I can do one of those things married people do.” He gestured with his hand to make it clear he was talking about a blow job. I was aghast. Every year after that I tried to figure out a way to skip the pool party. But the one time I did, he tortured me about it for a year.

One day my co-worker Sherri ran over to me, crying. She showed me her weekly time sheet, with a note in Bill’s handwriting. It said, “I’m very attracted to you.” Bill was 68 years old at the time. Sherri and I were both 26. He was married to his third wife. I felt like scrubbing the time sheet with hand wipes. “What should I do?” Sherri asked me, a worried look on her face.

I didn’t have the answer. For the past month I had been trying to organize the other six women at work to bond together so we could sue Bill for sexual harassment, or at least confront him. Not one of them would agree to help. I tried cajoling them. When that didn’t work I tried getting them as mad as I was, but they all seemed passive.

“How long do you want him to slither his hands across your boob when he’s pretending to hug you?” I asked. They accused me of being too dramatic. I accused them of being in denial.

Day after harassing day, Bill would walk up behind me as I sat at my desk. He would slide his huge meaty hands around my neck until his fingertips touched. It felt like a combination of him wanting to seduce me and strangle me. Each time it happened, I was rendered paralyzed and speechless. One day I’d had it and said, “Don’t touch me!”

That started an ongoing office humiliation that would last for the entire eight years I continued to work there. Bill would sneak up behind me, and he would start to put his hands around my neck but would stop less than an inch away. Then he would make sure that he had an audience and say in a mocking tone, “Oops! No touchy.” All of the brownnosers would give it a hearty laugh and the blood would rush up to my face and ears.

Want Attention or to Tick Off Your Bartender, Then Do this

My friends and my feminist mom often demanded an explanation for why I wasn’t taking this man to court. Bill was brilliant; he knew a lot about the law, and he was rich and could afford much better lawyers than I could. I was afraid of being ripped apart on the stand as rape victims often are. I was reluctant to spend all of my meager savings on lawyers and afraid of being fired.

One day I returned from an approved day off. Bill blocked my way to my desk and used his deep, flirty voice, “Ms. Olds” — he always called me that — “please see me in my office immediately. And bring the layouts that are on your desk.” I did as he asked. He shut the door and said, “So, a day off? Are you in love?” I replied, “That’s not something I will discuss.” He slammed his fist down onto his desk, lurched towards me and demanded, “Why are you so combative? We are a family around here.”

My response was not to his liking. “Bill, I have a family. This is where I work. Let’s talk about the layouts.”

My friend Lorraine gave me an 11″ x 17″ sign that said “What part of NO don’t you understand?” She suggested that I put it on the bulletin board behind my desk. I did. I wanted to believe it would help, but only two co-workers ever mentioned it. Both were female.

Temps often worked the phones at the front desk. There was one large, sassy, redheaded Southern gal named Lucy. She pulled me aside one day, about three years after I had begun working at the firm, and said that I should know that the men doing the same job I was doing were paid more than I was. This was a tricky bit of information. How could I bring it up with Bill without betraying her confidence? When I had been hired full-time, Bill had assured me that I would receive periodic raises “without even having to ask for them.” This had never occurred. I decided to muscle up some courage and go in for a talk.

“Bill,” I started, “are you pleased with my work?”

“Am I being paid on the same scale as the men?”

Did I hear him correctly?

“Ms. Olds, David has a wife and two daughters to support, and mortgage on a house to worry about. It simply would not be fair to pay him the same amount as you.”

I was dumbfounded. Speechless.

The following week I received a raise. Very smarmy way to get a raise, but I was glad to deposit the money.

One day, without my knowledge, Bill took a photo of me. I was leaning over my desk, deep in concentration, working on graphics for a chart. I was wearing an appropriate V-neck top, but at that angle, a hint of cleavage appeared. He passed the snapshot, a zoomed-in view of my breast area, around the office. Another time, when I had to fix chipped type on a chart in a hurry, I knelt down on the floor to quickly restore the chipped ‘H’ on the sign. Bill came through the doorway and said, “Ah, women — just how I like them, on their knees.”

I continued to look for a better job. I went on interviews. My father always warned me never to quit a job until I secured a better one. One November afternoon, Bill called me into his office and told me to close the door. He sat slumped, his brow was furrowed and the sides of his mouth were turned down. “As you know, business has been very slow this year. I am going to cut your salary by half. I’m sorry to give you this news, but I’ve always appreciated your loyalty and I know that you will stand by me during these tough times.” This came as a shock to me and so did my response: “In that case, Bill, I will not be working here any longer.”

It was as if I’d jumped out of a plane with no parachute and was in free fall. But the feeling was glorious and the risk paid off. I went into business for myself, which was terrifying at first. I had a mortgage to pay and monthly bills and feared using up the bit I’d managed to save. But within a month I got a full-time freelancing gig designing college textbooks and that year I made twice as much as I’d made working for Bill. I landed more and more creative jobs, web design and print work, and my writing took off.

It’s been years since I worked in an office. My desk is at home and my loyal dog likes my whistling. I make twice as much money and literally whistle while I work. And there is no longer a six-foot-four goon of a boss grabbing the back of my pants. 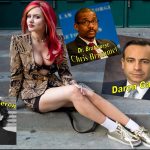 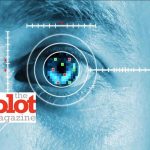