About a year ago, I wrote a piece that provided Easterners a basic introduction to the art of grilling. I take outdoor cooking very seriously, and I am constantly on the lookout for new ways to turn animal flesh into dinner over an open fire. Since last year was about the basics, this summer, I offer you an edgier take on the joy of grilled food. Summer 2015 is the season of extreme grilling.

To start off, I want to introduce you to something called “clinching.” This was President Eisenhower’s favorite way to cook outdoors. He didn’t invent it; someone named Og probably did shortly after the domestication of fire. In simplest terms, clinching is grilling without the actual grill. You put the meat directly on the charcoal. Don’t freak out. Julia Child herself dedicated an episode of her show on PBS to “dirty steak.”

Here’s how it’s done: Start with lump charcoal. This is harder to find than briquettes, but briquettes produce a lot of ash. Lump charcoal, also called “natural” hardwood charcoal, tends to come in bigger chunks that afford a larger surface area on which the meat will rest.

Light the charcoal using a chimney or an electric starter (see last year’s article). Do not use lighter fluid because it can leave a residue behind, which will transfer to the food. When the charcoal is covered in ash, toss your seasoned steak, chop, cutlet or whatever directly onto the coals. The fat will cause a great deal of smoke; do not panic. Presuming you have an inch-thick steak, let it sit on the coals 3-4 minutes per side. The outside will be charred and crusty while the inside is nice and smoky.

“What about the ash on the steak?” I hear you ask. Well, what about it? It’s cleaner than your mouth because it’s just been through a fire, so it isn’t going to make you sick. Surprisingly little of it remains on the meat as a matter of fact. Now if you are one of those effete Easterners who can’t imagine ash on a steak, take a blow dryer (because you are also the type that owns at least one), and blow the ash off the charcoal before putting the meat on. And then, use it to blow any ash off the food once it’s cooked.

Another approach to extreme grilling has to do with the method used to start the charcoal. I have suggested a few approaches already, but the big complaint many have is that it takes too long for the charcoal to be ready. That one point sells a lot of gas grills, which are evil incarnate.

So, if you are a welder or use a propane torch to burn weeds and other vegetation, you already have the necessary tools to do the job faster. But what if you work in an office? To cut down on prep time, remember that oxygen is your friend. Take the same blow dryer you used to get the ash off the steak and use it to blow more oxygen into the smoldering charcoal. It’s a 21st century version of the bellows the old-time blacksmith used.

Of course, all you’re doing there is putting more oxygen molecules (atmospheric oxygen is diatomic, so don’t say atoms) next to the carbon to accelerate the burning process. An even greater amount of oxygen can reach the fire at once if you use a denser form of oxygen. Remember, the atmosphere is about 23 percent oxygen. The canister of O2 your uncle with COPD uses is 100 percent oxygen. Kids, ask permission first.

Another interesting fact about oxygen is that, at around -300 below Fahrenheit, it is a liquid, which is much denser than gaseous oxygen. Just stack the charcoal in the grill, put a piece of burning paper in it (one that will burn a few seconds at least), and then dump a liter or so of LOX on it (LOX is what us science geeks say when we mean liquid oxygen — and it has nothing to do with fish from a delicatessen). You’re ready to cook in under two seconds. The one down side is that the ensuring fireball may melt some cheaper grills.

There are, however, some Eastern types who have won my respect for their outdoor cooking style. In particular, the Syracuse University Lava Project, a collaboration between the art and geology departments upstate, has a video showing the use of lava rather than charcoal. I am duly impressed.

And, yes, they clinched a steak on the lava.

If anyone up there is reading this, I have a few free weekends this summer … 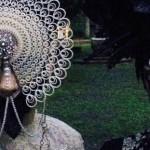