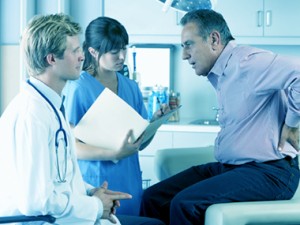 I was in an ER with something stuck in my penis. My worst nightmare has just happened during Christmas. I was in a lot of discomfort. It was getting late at night and I couldn’t urinate. I dislike hospitals and am wary of going to my Doctor. My penis hurt so bad and I couldn’t bear the pain.

I think they are going to poke and probe and order me to do things. Some which actually are good for me. Like eating less sugar and more portions of fruit and vegetables.

I called my internist and told him my symptoms and he urged me to go to the hospital where he’s affiliated. He thought I had an enlarged prostrate and that it was protruding into the urethra and used some medical terminology that went sideways in one ear and out the other. He stressed that this happens to men in their 60’s all the time.

“You’re not the only one,” he said. OK, where are the others?

He told me ER personnel would admit me without waiting and they would insert a catheter and I won’t feel much pain, but relief that your bladder can empty. I had to trust him. I cabbed over and was amazed I waited just 15 minutes at 10:30 pm on a Monday night. I remember seeing the Monday Night Football game and the Bears, my favorite team, were getting soundly beaten.

I was directed to a bed in the corner of this large room, curtains surrounded this tiny private area. This room was filled with a lot of sick people hooked up to tubes and machines.

It went downhill from there. My blood pressure was high, but if you’re gazing at a lot people in white coats with stethoscopes, that’s a good reason why. I had to trust that whatever happened would be for my benefit. Little did I know that supposition would be sorely tested.

A male nurse ripped open a pouch that housed a plastic 8” to 10” tube. I glanced at it for a second and had the thought: “WTF!”

Panicked, “You’re going to put this thing in my ‘Johnson.’” After this, they’ll have to call me “Mrs. Jones.”

The nurse sensed my anxiety and tried to reassure me,” You’ll feel better in a moment.”

A long time ago, I had thought, “Boy, I’d hate to have something inserted in my penis.” It was time to face this “scary thought” and surrender to this.

He put it in quickly and moments later I felt this stinging sensation and relief almost at the same time. Is this what it’s like when you’re abducted by aliens? I didn’t even have to turn over.

The nurse said, “It’s your prostate, most likely.” I didn’t know too much about prostate stuff except that some famous men had survived prostate cancer.

I felt uncomfortable with this object in my penis. I could hardly move my legs. If I wasn’t “sick” before this, I certainly felt ill now. I was groaning softly. The ER staff is very good at is taking your blood pressure. Mine was way high. So, they gave me pills up the wazoo until it lowered to almost normal.

I just stared off and then looked over at the patient lying in a bed next to me. I asked him, “what are you in for?” with the bravado of an inmate who just got locked down in a cell. He said he had heart problems.

I sized up my situation, “Things could be worse?” Forget about sleeping. With the beeping and buzzing of machines and the hushed voices of nurses scurrying about, and the heightened state of fending off anxiety and fears, I was awake, but groggy.

I fumbled and dropped my cell phone and a book. A nice female visitor kneeled under my bed and retrieved the phone and my book. And, she even filled a glass of ice water and put a straw in it and I drank it. I thought, “Wow, such kindness!”

At first, the Assistant Physician thought I had an infection in the urethra.

I eventually stood up and felt this pain in my groin and promptly sat down on the white sheets. I noticed some moisture on my boxer shorts and spoke up. That was a mistake. A big one. If I knew what could have happened as a result of saying something, I wouldn’t have said a thing.

However two young nurses agreed that the first catheter wasn’t inserted properly and needed to be replaced with a slightly bigger size. I sat on the bed in disbelief. “You mean you are going to put in a bigger size?” I asked incredulously.

“Oh yeah, it happens.” They took it out the “smaller” one by sliding it out of this tiny channel which felt like I was being skinned alive.

Things happen in ER rooms, scary things. I must have had a look of horror on my face because I felt horrified. I instinctively put my hand down near my crotch to protect myself but they suggested “This would be over soon, and you might as well relax so we can do our jobs.”

It seemed like they were trying to fit a round peg into a square hole with a hammer. It was a nurse tag team and I lost.

This could have been an effective tool of torture — but since torture has been basically outlawed, this probably won’t happen. Waterboarding and having a catheter put in your penis hole is a close toss-up. The nurses strained. I strained against them in almost primal reflexive moment, aghast that this was happening at all. I felt terrified, for sure that blood was pouring out somewhere in a place I didn’t dare want to look. They kept pushing….

I felt like I was going to pass out. Finally, they declared the job done. I looked for blood and thankfully didn’t find any. I alternatively cursed and prayed. I couldn’t walk for 20 minutes. The nurse said, “Your body is in trauma.” Hey, that’s a freaking good observation.

They eventually released me with a portable catheter wrapped around my leg. You know I discovered something: It’s painful to walk around with a tube where you do number one. It’s sharp and stinging and feels uncomfortable.

My body slowly got used to it, and I weathered the storm for six days until it was removed by a doctor with a suction device that took all of 5 seconds. I prayed that she should be ordained on the spot.

My internist was correct. I was diagnosed with BPH, a condition that affects thousands of men. I take some medication and natural herbs to increase the health of the prostrate. Welcome to ‘aging’ Rich. So far, so good.